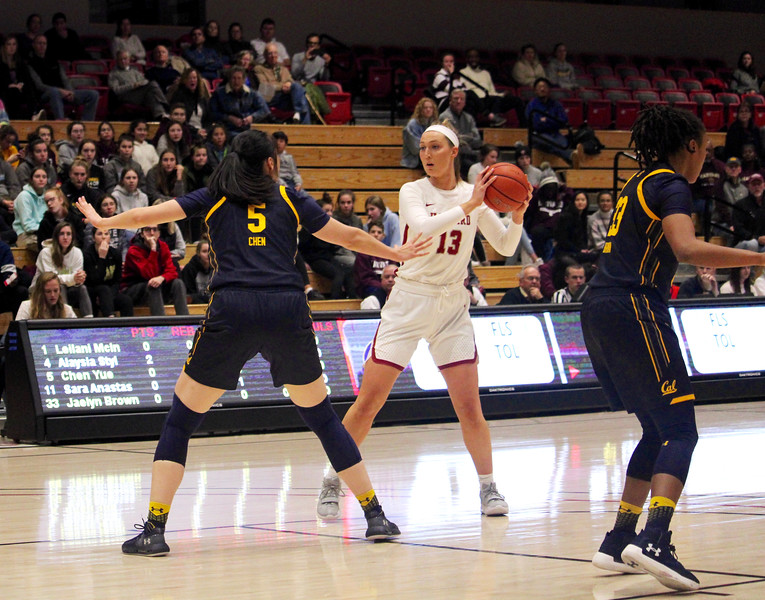 Harvard women’s basketball senior guard and co-captain Mackenzie Barta dismissed the idea that her team, which rests heavily on the shoulders of young players, has jitters about the start of Ivy League play.

“We're just super excited because we know we're going into Ivy League quite possibly as underdogs,” Barta said. “That's really exciting for us.”

To kick off Ancient Eight competition, the Crimson fell to Dartmouth in Hanover on Jan. 11. Harvard returned home to Cambridge on Jan. 25 and redeemed itself in a double digit victory against the Big Green. Though the Crimson (10-5, 1-1 Ivy) and Dartmouth (7-8, 1-1 Ivy) each came away with one win and one loss, Harvard surpassed the Big Green in aggregate scoring by 14 points by overcoming its last-second loss with a resounding win.

Freshman guard Lola Mullaney made a statement in her Ivy League competition debut. Mullaney headlined the Crimson’s victory over Dartmouth, leading both teams in scoring with 18 points. She shot fifty percent from three point range, knocking down four shots from behind the arc. Though the season is just getting started — much like the rookie’s career itself — Mullaney is averaging 17 points through the first pair of Ancient Eight games.

Back in September, Coach Kathy Delaney-Smith told The Crimson that she saw big things in Mullaney’s future at Harvard.

“She may be the best shooter to ever play here if she continues the way she’s going right now,” Delaney-Smith said. “She can be as good as she wants to be.”

“I love Lola because she's so confident and that confidence never wavers,” Barta praised her teammate. “I’m very proud of her.”

Friday night’s matchup was either team’s game to win. Though Dartmouth took an early lead, Harvard only trailed the Big Green by four points at half time. Through a back and forth battle in the second frame, the Crimson’s first Ivy League game of the season came down to the wire.

Harvard led Dartmouth 62-58 with just under three minutes of game time remaining until Big Green guard Katie Douglas knocked down an uncontested three pointer — her fifth triple of the game — to put her team in a position to take the lead.

Dartmouth went on to do just that.

In the next two minutes, the Crimson and the Big Green exchanged a series of unsuccessful attempts from the field. Harvard still led by one point with under 20 seconds to play.

That is until, on the defensive end, Dartmouth’s Douglas furtively double teamed Barta, ball in her hand at half court, and knocked the ball out of her grip. Big Green senior guard No. 2 Annie McKenna recovered the ball and finished a fast break layup to send the Crimson back to Cambridge with its first Ivy League loss of the season.

Despite the unpropitious conclusion to the game, Harvard stayed true to its playing of unselfish basketball. Three Crimson players contributed double digit figures.

Mullaney led Harvard’s scoring effort with 16 points. Though she only scored six of her points from the three point line — the spot on the court from which she has proved most dominant — Mullaney evinced grit attacking the paint and drawing contact with her opponents. At the charity stripe, she knocked down four of five shots.

Barta scored 14 points and her co-captain, junior forward Rachel Levy, scored 12 points coming off of the bench. As the tallest woman on the floor, senior forward Jeannie Boehm took advantage of her height to grab a career-best 18 rebounds in her last first Ivy League season game.

At Lavietes Pavilion this weekend, The Crimson will host perennial Ivy League powerhouses Penn and Princeton.

Last season, Harvard and Penn proved competitive in Ivy League play. In the teams’ first matchup at Lavietes Pavilion, Harvard prevailed over Penn in double overtime. Two weeks later, the Crimson suffered a five point loss in overtime on the road to Penn. At the Ivy League Tournament Semifinals, Penn foiled Harvard’s bid for a spot in the NCAA tournament, routing the Crimson 91-62.

Delaney-Smith said her team no longer ruminates on last season’s disappointing coda. She said her players treat every game seriously.

“I think every Ivy League game is really important,” she said. “In any given night anyone could beat anyone.”

Harvard will host Penn at 7 p.m. on Friday night followed by Princeton on Saturday at 5 p.m.