Women’s Ice Hockey Routs No. 9/9 Boston College and Prepares for Its Weekend Return to ECAC Play 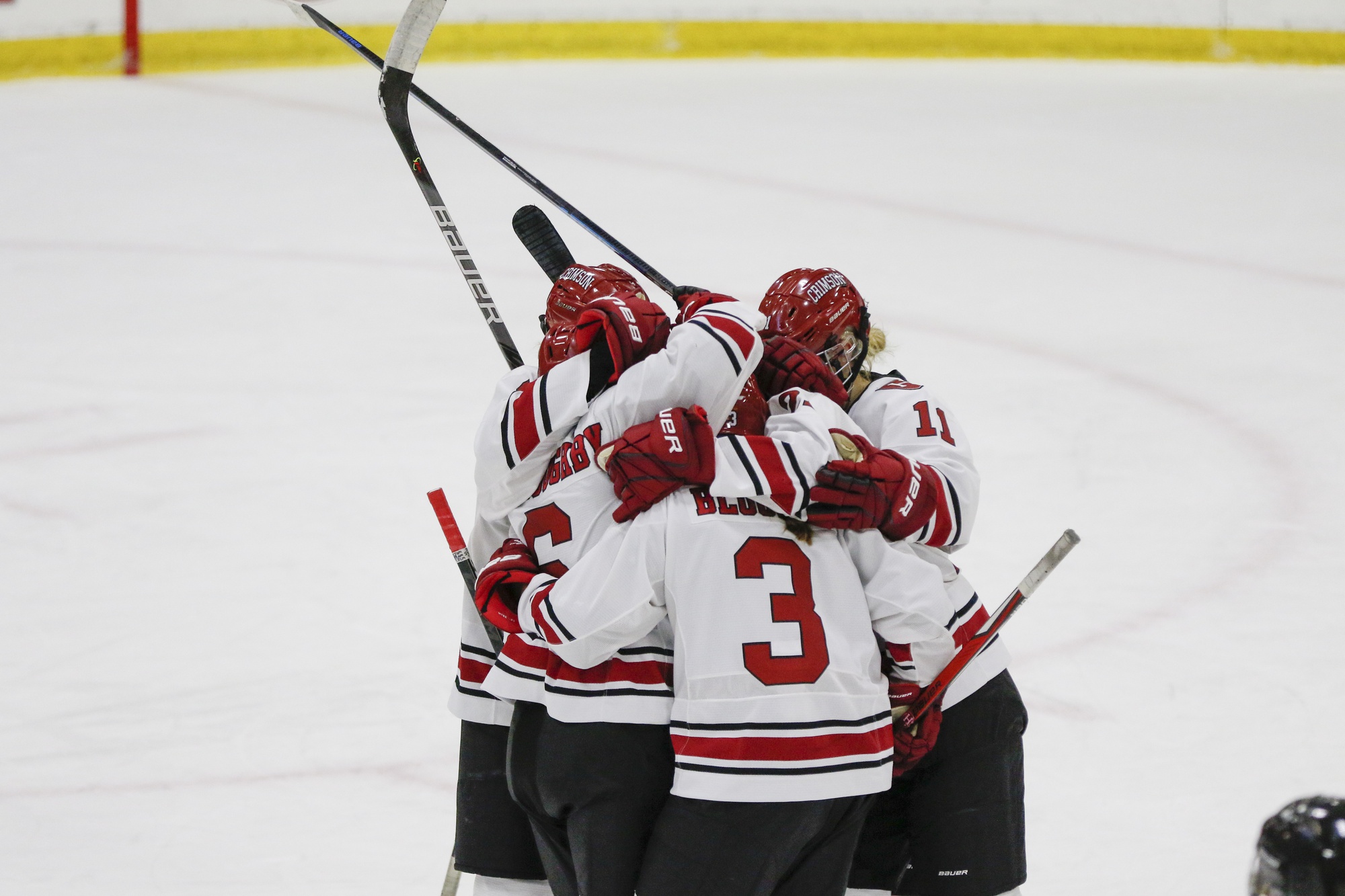 The Harvard offense boasted six double-digit point scorers before the new year. In 2020, the Crimson will be looking to maintain its balanced attack. By Timothy R. O'Meara
By William C. Boggs, Crimson Staff Writer

After a dominant 5-0-0 start to the season, Harvard dropped its next four games. With only two games to go before winter break, however, the Crimson mustered a road sweep to push its record to 7-4-0 before the holidays. On New Year’s Eve, Harvard managed to continue its momentum from the first semester—and then some. Facing off against the No. 9/9 Boston College Eagles on the road, the Crimson scored early and often, stretching the margin to a 7-1 victory by the time the final buzzer had sounded. With the statement win in the books, Harvard will divert its attention back to ECAC play in a two-game home set against Union and Rensselaer (RPI).

The Crimson not only started the scoring early but even found the back of the net within the first 90 seconds of game time. After flipping a defensive zone faceoff into an offensive rush, first-year forward Shannon Hollands completed a breakout pass through the neutral zone to sophomore forward Anne Bloomer. Bloomer did the rest, skating the puck into the zone, dipping below the faceoff dot, and shoveling a backhand top-shelf over the arm of Eagles sophomore netminder Kelly Pickreign.

“She [Hollands] gave me a really nice pass,” Bloomer said. “I saw that there was an opening, tried to move my feet as fast as I could, and just put it on net. And it ended up going in.”

The Harvard offensive would not end in the first minutes, however, as the team managed to push its lead to 3-0 by the midway point of the first period, including a highlight-reel tic-tac-toe passing play on the third goal. On this scoring play, pushing towards the net, first-year forward Courtney Hyland curled back towards the blue line before dishing to junior forward Becca Gilmore. Gilmore moved the puck right away to co-captain and forward Kat Hughes, who received the feed and redirected it into the net in one continuous motion, capping off the 3-0 lead that would hold through the first intermission.

The Crimson would score another two unanswered until Boston College struck in the third to cut the lead to 5-1. Despite the Eagle response, the margin widened again for Harvard in the latter half of the final frame as sophomore forwards Dominique Petrie and Kristin Della Rovere both added their second tallies of the game to set the final score at 7-1.

The fast start, notable not only because of the strength of the opponent but also because of the length of the layoff leading into the game, played a crucial role in the Crimson victory. Harvard had not played since Dec. 7, and neither had Boston College. Rust may have played a role in the slow start for the Eagles, but the Crimson seemed to avoid the pitfall of the long break.

“Our whole team was prepared for that game,” Bloomer said. “We had been working really hard before, during, and after winter break. We had high energy the couple of days before… To strike early was huge in taking the momentum and setting the tone for the rest of the game.”

Despite Crimson’s lead in the scoreline, Boston College actually controlled the shots-on-goal battle in the game, 46-27. In fact, the Eagles led Harvard in shots in each of the three periods. Nonetheless, the Crimson still managed to earn solid possession (aided by a 39-28 faceoff win margin) and converted on the chances created. That said, keeping Boston College at one goal depended on much more than offensive efficiency, boiling down to a stout defensive and goaltending effort. Indeed, sophomore goalie Lindsay Reed posted a 0.978 save percentage on the day, giving the team some leeway to take chances on the offensive side of the ice.

“Our defensive play was great, and our goaltending was awesome,” Bloomer said. “Everything starts with defense. If you play solid defense, it makes it easier to get offensive momentum going. If you play well defensively, it gives a lot of confidence to the team and demoralizes the opponent...It’s always been a focus of our team to have a really strong [defensive] core, and things will feed and build off of that.”

Although Boston College struggled on Tuesday, the Eagles still do boast a strong record (11-7-2, 10-5-1 Hockey East). Harvard’s weekend opponents, however, have not fared as well. The Engineers of RPI are seeking their first win of the season, and the Dutchwomen of Union have a 2-4-1 record in the ECAC but have struggled to find the win column in non-conference play.

In last year’s matchups, the Crimson did perform well, going 4-0 in the two pairs of games against the two teams, managing to defeat Union by four-goal margins twice (4-0 and 5-1). RPI, however, fought hard to 2-0 and 2-1 losses to Harvard, revealing the parity between the two teams just a year ago. Obviously, a lot can change in a year, and the Crimson has had the privilege of returning the vast majority of its roster while many of its opponents have not. Even still, while Harvard and its weekend foes do have very different records, the familiarity of conference play still unites them, presenting a challenge for all involved.

“It’s really important to not take any of these league games for granted, especially with the strength and the overall level of the ECAC,” Bloomer said. “It’s one of the best leagues in the NCAA. Everyone is going to give you a battle every weekend. We have to come in prepared like we always do… Any team can win on any day. It’s important that we never underestimate any team.”

In fact, in the fall semester, Harvard almost saw firsthand how any team can win on any day. While the Engineers do sit in last place in the ECAC, the Brown Bears, a team the Crimson has played twice already this season, sits in second-to-last. Harvard did win both contests, thus preserving its 8-4-0, 7-0-0 ECAC record. In doing so, the Crimson earned a 4-1 victory in the first matchup with Brown, but even that game entered the third period 2-1 before Harvard pulled away to the 4-1 final. What’s more, in the second game, the Bears clawed back to force overtime before the Crimson escaped with a 3-2 triumph in the extra session.

Moreover, while the New Year’s Eve tilt with the Eagles did mark a success for the Crimson, the Harvard shots-on-goal deficit is a trend to watch. Going back to last season, the team has struggled at times to keep pace with its opponents scoring attempts. Earlier this year, when Harvard squared off against national powerhouses, No. 1/1 Wisconsin and No. 2/2 Minnesota, in the Country Classic outside of Nashville, Tenn., the Crimson managed to hang around until the third period of both games. Eventually, however, both the Badgers and Gophers mounted huge shots-on-goal advantages, 57-15 and 43-21 respectively, wearing down Harvard and allowing the nation’s top two teams to convert tight games into comfortable final margins (Wisconsin won 5-1, and Minnesota won 4-0). On the other hand, in the aforementioned 4-1 victory over Brown (not the overtime sequel), the Crimson pummeled the Bears in shots-on-goal, 59-14, guiding it to victory in a game that remained close otherwise.

Granted, the Crimson has proven it can achieve high offensive efficiency, averaging 3.58 goals/game on the season, and the defense and goaltending can certainly sustain shots deficits. And despite struggles in generating shots in some games, the team has averaged 30.2 shots/game for the season, so at other times, the team has gotten plenty of pucks to the net. Nonetheless, playing a simple offensive game that funnels chances to the goalmouth remains a focus and has been key to success when the team performs well.

“It’s important to come up hot right off the bat and to get the first couple of shots on net,” Bloomer said. “It helps when you just fire pucks on the goalie right away...not to overthink things but to play our game and play Harvard hockey.”

As mentioned, the Crimson offense has been approaching four goals/game for the 2019-20 campaign, a major improvement on the 2.31 goals/game average from last season. Outside of volume, however, Harvard has also shown balance in its offense. After all, on New Year’s Eve, 11 Harvard skaters appeared on the scoresheet, and three different players recorded multi-goal games (Hughes, Petrie, Della Rovere). On the season, the team has six players who already have double-digit point totals—through just 12 games. To continue winning ways into the weekend’s RPI and Union games, the Crimson will be looking to maintain a balanced attack.

“When we play our best, we get a ton of people, a ton of lines scoring,” Bloomer said. “We use our depth really well. We have a lot of talented players on our team—a lot of players that can play different roles...plenty of players who can score.”

Harvard will face Union first at 6:00 p.m. on Friday and then turn its attention to RPI at 3:00 p.m. on Saturday. The Crimson will be looking to remain undefeated in conference play in the process.