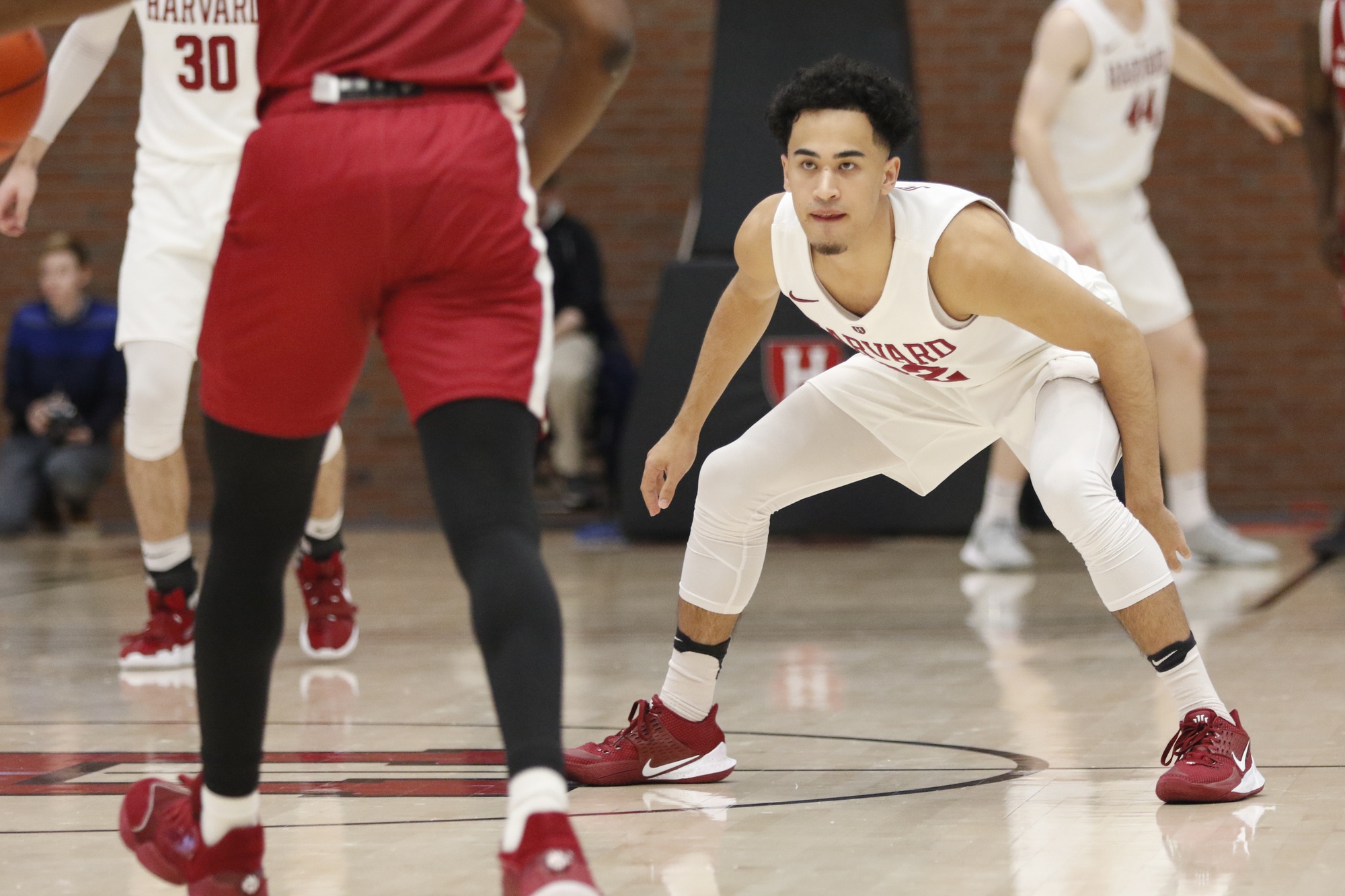 One season ago, the Crimson’s Thanksgiving travels to California ended with an impressive win over Saint Mary’s, but left the team just 1-1 on the trip after a disappointing comeback effort fell four points short against the San Francisco Dons.

13 months later, Harvard men’s basketball (10-4, 0-0 Ivy) bookended a perfect 4-0 road trip with a nail-biting victory against those same Dons in the very same building, extending the team’s season-high win streak to five games. In doing so, the Crimson triumphed over a solid team that had already beaten Ivy League foes Princeton and Yale, just 24 hours after knocking off the California Golden Bears in Berkeley.

The game was a see-saw affair, with Harvard leading San Francisco (11-4, 0-0 WCC) for most of Sunday evening’s contest. After uncharacteristically struggling from beyond the arc all evening, the Dons leaned on a late spree of three-point shooting and a full-court press to even the contest. San Francisco even had a chance to win at the buzzer, but a Jordan Ratinho three-pointer flew off the rim, sending the game to overtime for an extra five minutes of play.

After 40 hard minutes the prior afternoon in a contest that the Crimson eventually held onto over Cal by a 71-63 scoreline, the overtime period could have spelled disaster for the visitors. But back-to-back baskets by senior guard Christian Juzang — including a dagger triple inside the last two minutes — helped seal a suspenseful and exhilarating 84-81 victory for Coach Amaker’s team.

“Honestly we just had to fight through fatigue, this was one of those games when everyone had to be ready,” admitted junior guard Rio Haskett about the toll of the Dons’ full-court press and comeback effort. “I think it was just mental toughness and staying connected, that was a big emphasis this week.”

Haskett played a crucial role in seeing out Sunday night’s victory, playing a season-high 28 minutes and scoring 11 points, including a crucial 3-of-4 from beyond the arc. Haskett’s three-point shooting has been a revelation for Harvard this season, as the Richmond, Va., native has found the basket on over 45 percent of his triples, after converting around 33 percent of them in both of his prior seasons.

“It’s mostly my team and Coach, just telling me to be shot ready,” said Haskett, quick to credit the others on the court for helping him find open looks. “I’ve been shooting well all season, so they just told me to step into it and shoot it with confidence.”

Coach Amaker and the Crimson will hope that beating San Francisco, widely considered to be a growing mid-major power in the West Coast Conference, will be a sign of good things to come as Ancient Eight play approaches. Perhaps more importantly, the victory over the Dons and the trip as a whole, including two victories over George Washington and Howard, demonstrated two of Amaker’s favorite themes: bench and balance, and the next-man-up mentality that the Crimson frequently look to emulate.

Just 20 minutes into the four-game road trip, guard Bryce Aiken exited Harvard’s first matchup against George Washington with what was later diagnosed as an injured foot. And while the team may have lost its top scorer, Amaker’s team was forced to look elsewhere for scoring. In doing so, the Crimson’s four-game road trip featured a different hero on a nightly basis, from senior Chris Lewis, to fellow classmate Christian Juzang, and other role players like Haskett.

In Aiken’s stead stepped Juzang, a fourth-year who is more than familiar with the role of starting point-guard, having previously replaced Harvard’s star guard for nearly a full season. Despite a stretch of play in November during which the Tarzana, Calif., native played fewer than 10 minutes in four consecutive games, Juzang’s play in his return to The Golden State was pivotal. The fourth-year scored 14 points against Cal and 17 against the Dons, drilling 5-of-9 threes in the two-game swing and playing at least 33 minutes in both victories, with no moment as large as his clutch overtime three-pointer against San Francisco.

“He has an unshakable confidence, and I love that about him,” said Coach Amaker of the senior, who has stepped into the starting role seamlessly. “He thrives on those moments where it’s a big play or a big shot, and he’s delivered for us… he’s been the guy who’s stepped in for us and provided that leadership and big play-making moments, so I’m very, very proud of him.”

Although Aiken’s timetable for his return is unknown, Juzang’s ability to capably helm Amaker’s offense in his fourth season is beyond a shadow of a doubt. After starting 21 games in his sophomore season, and 25 contests last year, the adjustment to playing off of the bench and staying prepared when his number is called is not one that has changed the senior’s attitude.

“Definitely not the easiest thing in the world, but that’s something I pride myself on,” said Juzang of his move to coming off the bench earlier in the season. “I’ve been here before, where nothing was guaranteed, and you know, fresh and ready when my number’s called and I’m glad I was able to show everybody.”

With Juzang manning the point, Harvard was able to knock off George Washington and Howard on back-to-back days, before flying to California and doing the same to Cal-Berkeley and USF. With the victories, the Crimson were able to extend its winning streak to five games, dating back to disappointing losses to Maryland and USC at the Orlando Invitational over Thanksgiving.

In fact, by knocking off Cal, Harvard secured a second victory against a Power Five school this season, after beating Texas A&M earlier in the season. The last time Coach Amaker’s team achieved the feat was during the 2013-2014 season, a campaign that saw the Crimson go 13-1 in Ivy play before knocking off Cincinnati in the opening round of the NCAA Tournament, before losing to blue bloods Michigan State. The victory also gave Harvard its first win over Pac-12 opposition since the 2012 season.

With one final non-conference game looming in the form of a visit from UC Irvine this Saturday, Harvard has a very real possibility of entering Ivy League play with a six-game winning streak intact.

And although the status of Aiken leaves some questions as Ancient Eight play approaches, Amaker’s rotation of Juzang, Justin Bassey, Lewis, Noah Kirkwood, and Robert Baker, complemented by Haskett, Danilo Djuricic, Mason Forbes, Chris Ledlum and others off of the bench, is gaining steam.

On any even given night, it can be a different hero for the Crimson. And by winning over solid teams, Harvard may be able to find the unique blend of confident starters and solid bench play, that will surely be required to knock off Yale, Penn, and the other Ivy League contenders in 2020. The side begins conference play against Dartmouth on January 18th.

Questions may still remain about this Crimson team, but after a 4-0 road-trip and a five game win streak, the red-eye flight back to the East Coast will surely have been a satisfying one for Amaker and Harvard men’s basketball.