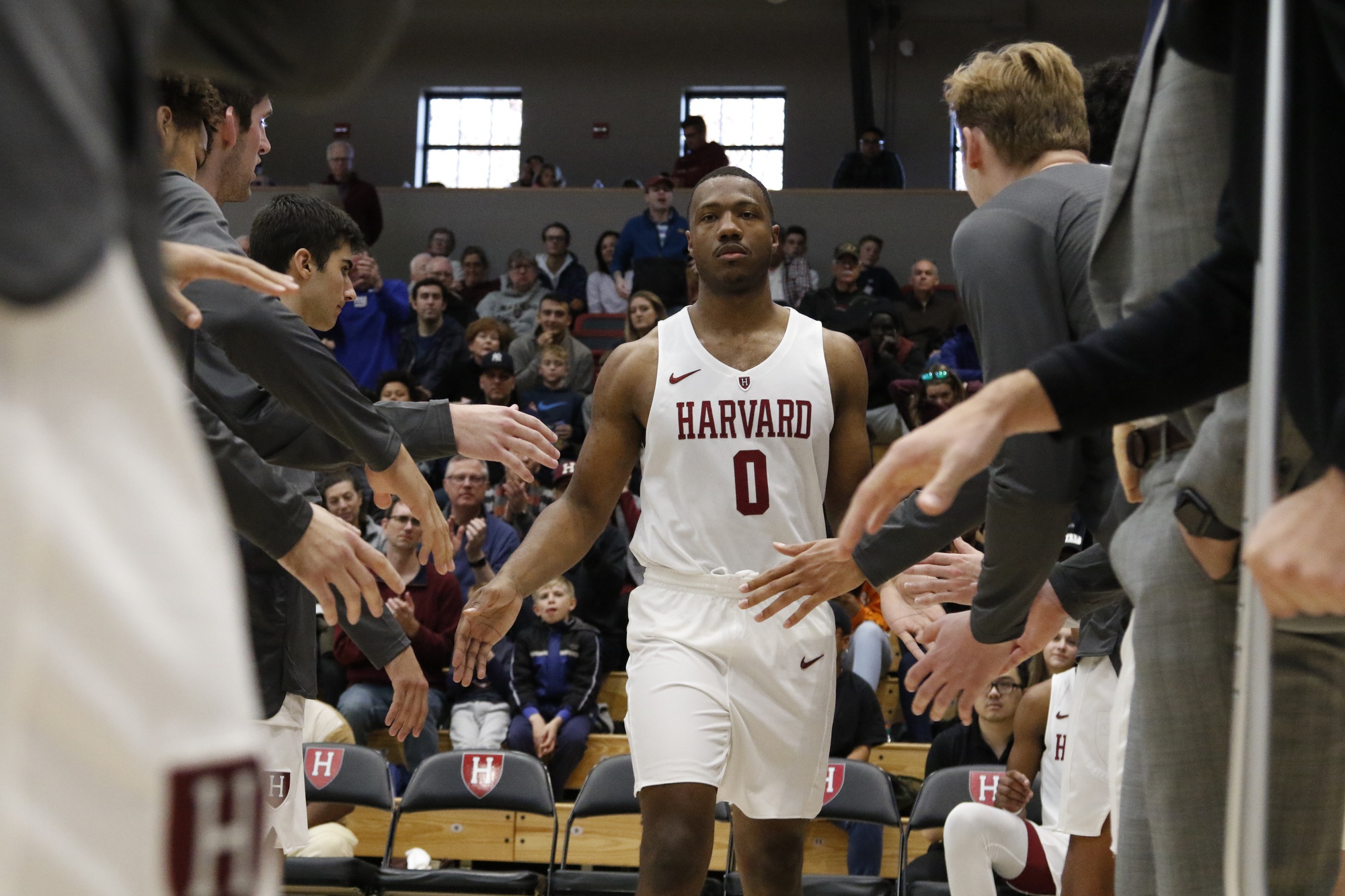 Chris Lewis is a guy who likes to do his talking on the court.

While it might seem somewhat contradictory for a 6 feet 9 inch senior forward whose favorite method of scoring is a thunderous slam dunk, Lewis is a soft-spoken player away from the hardwood.

Whether it be in a postgame interview or with his teammates, the veteran has earned a reputation for leading by example. And while other players may command respect more demonstrably or vocally, Lewis’ leadership and performance in the past month are becoming harder and harder to ignore.

Since the beginning of Harvard men’s basketball’s December road trip to Washington, D.C. and the Bay Area, Lewis has scored in double figures in five straight games, matching a career high. The Alpharetta, Ga., native led the team in scoring in its first three games of the trip, highlighted by 22 points against George Washington, second to only the 29 points he scored against Cornell in double overtime his sophomore season.

“I think it was the ball movement,” said Lewis, quick to attribute his succesful performance against George Washington to his teammates. “My guards were feeding me, giving me good passes so I could get good finishes, I just give credit to them.”

Over the past month the Crimson has focused on getting its star big man looks closer to the basket, also using him as a press-breaking tool as seen against the University of San Francisco. This strategy of targeting Lewis on the inside has helped boost the senior into the top 30 players in the country in field goal percentage, amongst approximately 4,500 Division I players.

With fellow senior Bryce Aiken exiting the first game of the trip with a sprained foot, Lewis calmly stepped into the spotlight, leading Harvard to a flawless 4-0 road trip before returning home to beat UC Irvine. Alongside fellow senior, guard Christian Juzang, the forward has been a key cog in a stretch that has propelled the Crimson to a six game winning streak entering Ivy League play.

As much as any on-court contributions, however, teammates point to the guidance and example that seniors like Lewis and Juzang have provided throughout the recent run of success.

“This last four game stretch they’ve been playing really well,” junior guard Rio Haskett said of Lewis, Juzang, and the rest of the seniors. “They’ve honestly just been leading us, all the seniors have been leading us like crazy.”

As a crucial member of Harvard’s highly touted 2020 recruiting class, Lewis is often highlighted on television broadcasts and the media more generally, who frequently focus on the senior’s Computer Science concentration, and his internship at Facebook.

Others choose to underscore his several Power Five offers from schools like Georgia Tech, Notre Dame, and the University of Miami, or the fact that he seriously considered attending MIT in lieu of playing Division I basketball. And of course, the all-too frequently told tale of his father, former NFLer Mo Lewis, whose crushing hit on New England Patriots quarterback Drew Bledsoe gave Tom Brady the first opportunity in his storybook career.

But beyond his academic interests, career aspirations, and familial anecdotes, lies a player who is content to let his basketball speak for itself. The renewed vigor and confidence that Lewis has played with over the past month hasn’t been lost on his fellow players, who point to the effort and dedication often unseen by the media as the catalyst for his brilliant stretch of play.

“This man has really been taking it to the next level, offensively and defensively,” said Juzang, Lewis’ teammate of four years. “He’s been really doing it. Whether it’s coming to practice early, the little things that people don’t really take notice of. He’s been really dialed in and I’m proud of him.”

As Juzang pointed out, Lewis’ impressive performance over the past five games haven’t just been restricted to the offensive side of the floor. Not only did Lewis tie a career high with four blocks when matched up against Cal’s 6’8 255 pound big man Andre Kelly, but the senior was able to set a new program record for blocks. Lewis surpassed Keith Wright ‘12 and his 150 blocks, with a total currently standing at 156, and the entirety of the conference schedule still remaining.

Although the past month has been a flourishing spell of play for the Alpharetta Ga., native, his career at Harvard hasn’t always been smooth sailing. After a promising sophomore season that saw him garner first-team All-Ivy honors, as well as NABC All-District second team and Ivy League All-Tournament Team recognition, the 2018-2019 campaign wasn’t as successful for Lewis.

After averaging nearly 13 points per game the prior season, Lewis registered just over 10 per contest in his junior season, with slightly fewer rebounds and more turnovers per game. And although his numbers were by no means shoddy, in a conference featuring talented forwards AJ Brodeur, Richmond Aririguzoh, Chris Knight, and Tamenang Choh, the Milton High School product was omitted from First and Second Team All-Ivy Teams. The lone Honorable Mention for the 2018-2019 season was given to another forward, Columbia’s Patrick Tape, implying that Lewis had performed in the bottom half amongst Ancient Eight big men.

A year later, Lewis appears poised to return to the ranks of the conference’s best, with a 64 percent field goal percentage that currently places him second in the Ivy League. This level of efficiency has been perhaps the most impressive part of Lewis’ recent play. Since a 3-of-3 performance against UMass on December 7th, Lewis has converted on an impressive 39-of-52 field goals, scoring at a remarkable 75 percent clip.

“A point of emphasis for us was to utilize Lewis on the inside,” Coach Tommy Amaker explained during the road trip. “He came through for us.”

The senior garnered Ivy League player of the week honors for his stretch of solid performances, including a perfect game at California during which Lewis scored or punctuated all seven of his field goal attempts with slam dunks, also draining all five of his free-throw opportunities. 24 hours later, the senior put together an impressive 14 point, 9 rebound night that was highlighted by a crucial 36 minutes of action, the second longest outing of his career.

In addition to setting the all-time Harvard record for blocks, Lewis has recorded at least one block or steal in all but one game this year, a crucial stat for a Crimson program that hangs its hat on limiting opponents’ scoring.

“It’s critical, there’s no other way of saying it,” said Coach Amaker of Lewis and the rest of the team’s defensive focus. “Our defense is our calling card for our program, we’ve built our program around defense, and our guys have had great effort.”

As the senior enters the twilight of his career at Harvard, the unspoken elephant in the room still remains for Lewis and the rest of the Class of 2020. This vaunted recruiting quartet of Lewis, Aiken, former conference player of the year Seth Towns, Robert Baker, and key role players Juzang, Justin Bassey, and captain Henry Welsh, have still yet to reach the NCAA Tournament.

Two straight conference championship appearances have brought consecutive losses against the hosts of the Ivy Madness tournaments, despite Harvard holding the No. 1 seed both seasons. With Towns undergoing season-ending surgery and entering the transfer portal, and yet another Aiken injury on the precipice of the Ivy League season, there are plenty of reasons to be distracted from the players currently in Coach Amaker’s rotation.

This Crimson team is entering its best run of form, with Lewis leading the way in the middle alongside sophomore Noah Kirkwood, freshman phenom Chris Ledlum, the rest of the senior class, and a cadre of junior and sophomore role players. And no player has been bigger than Lewis in helping the Crimson find consistency in the wake of injuries, turnovers, and the myriad other issues that arise over the course of a college basketball season.

Perhaps Coach Amaker put it best, humorously noting the stress relief that can accompany the end of finals, by saying, “I just think that he’s in a good place right now.”

With six victories in a row and a two week layoff in which Aiken may be able to return to full strength, before back-to-back Saturday contests against Dartmouth, there are plenty of reasons to be optimistic about Harvard men’s basketball.

Just don’t expect any of them to affect Chris Lewis’ poise or play, or to see a smile or a smirk out of the 6’9 senior.

He’ll let his play speak for itself.