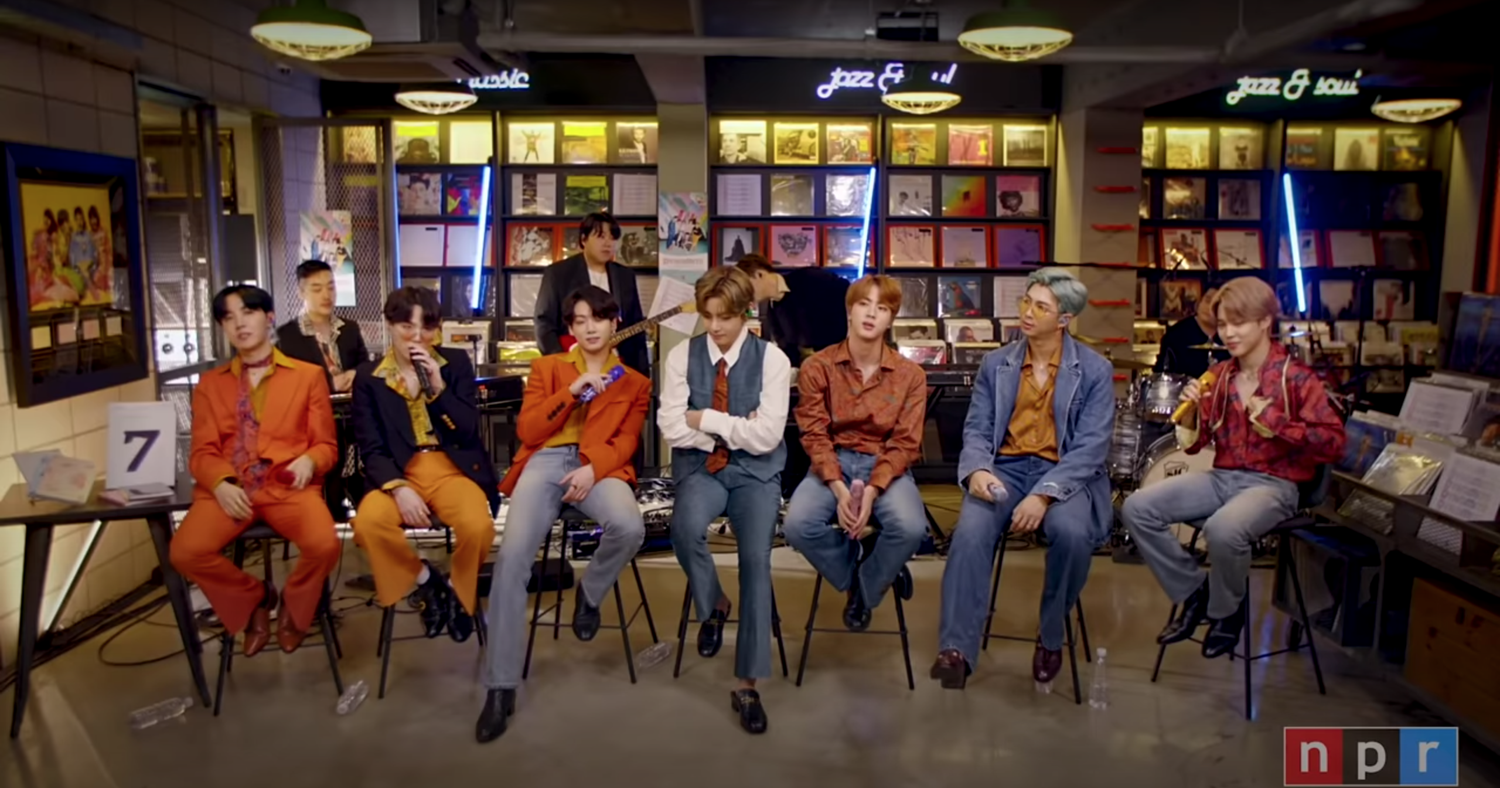 “Cause I, I, I’m in the stars tonight,” the video begins. A black screen gradually illuminates to feature BTS’ “Golden Maknae” Jungkook, clad in an orange suit and gripping an ultramarine sequined mic, crooning the opening lines to the septet’s latest disco-pop track “Dynamite.” Coordinated in orange and blue hues, the other members bob along to the beat. Band leader RM, with frosty cerulean hair and yellow tinted sunglasses, delivers his clean, emphatic rap as Jimin peppers the chorus with his distinctive high notes.

The group’s all-English song, which presents a departure from their characteristic Korean lyrics, delivers a markedly brighter sound than the broody, existential undertones of previous anthems from their repertoire including “Fake Love,” “Black Swan,” and “Interlude: Shadow.”

BTS’ appearance on NPR’s popular Tiny Desk series, now modified as Tiny Desk (Home) Concerts to accommodate quarantine restrictions, marks one of the band’s first public appearances since the cancellation of their 2020 Map of the Soul World Tour in late August. In keeping with pandemic guidelines, the septet performed in the private space of the Hyundai Card record store VINYL & PLASTIC in Seoul, South Korea.

The triumvirate of songs — “Dynamite,” “Save Me,” and “Spring Day” — presents a representative selection for both new and veteran ARMY alike. It is the band’s characteristically organic, endearing synergy that elevates the viewing experience: V throws his arm around a belting Jin’s shoulder as Jimin and J-Hope, on opposite sides of the studio, stand up and sway in harmony to the dying notes of the live band behind them.

Though the septet’s rendition of “Save Me,” first released in May 2016, provides ARMY a trip down memory lane, “Spring Day” drives home the expansive emotions and nostalgic intimacy of the performance. As soft vocal overtones open the acoustic rendition of the 2017 hit track, Jungkook reflects, “In such a difficult time like now, we all are wishing for the spring day to come.” The band’s mellow intro is punctuated by RM’s mumbling ruminations: “It’s been the roughest summer ever, but we know that spring will come, so let’s go together.”

J-Hope opens the song with the lines, “Miss you / Saying this makes me miss you even more.” Toward the end of the track Jin sings, “Until the days of spring / Until the days of flower blossoms / Please stay, please stay there a little longer.”

The second-person addressee in “Spring Day” is, like many of the band’s most philosophical ballads, left intentionally ambiguous. It is the simultaneous intimacy and ubiquity of the band’s discography that have catapulted the septet to such dizzying heights; BTS delivers a unique sonic narrative while affording listeners the interpretive space to insert their own lived experiences.

In pre-pandemic times, the “you” in “Spring Day” could have been anyone and anything: an estranged lover or a long-lost friend, a late family member or a beloved city. Post-pandemic, however, in an era of collective vulnerability when life’s most mundane elements are thrown into disorienting relief, the metaphorical implications of the song’s simple lyrics shift and expand. Perhaps it is not merely another person or another place that BTS sings of waiting for but, rather, ourselves, or at least the portion of ourselves placed on hold by the surreal reality of Covid living.