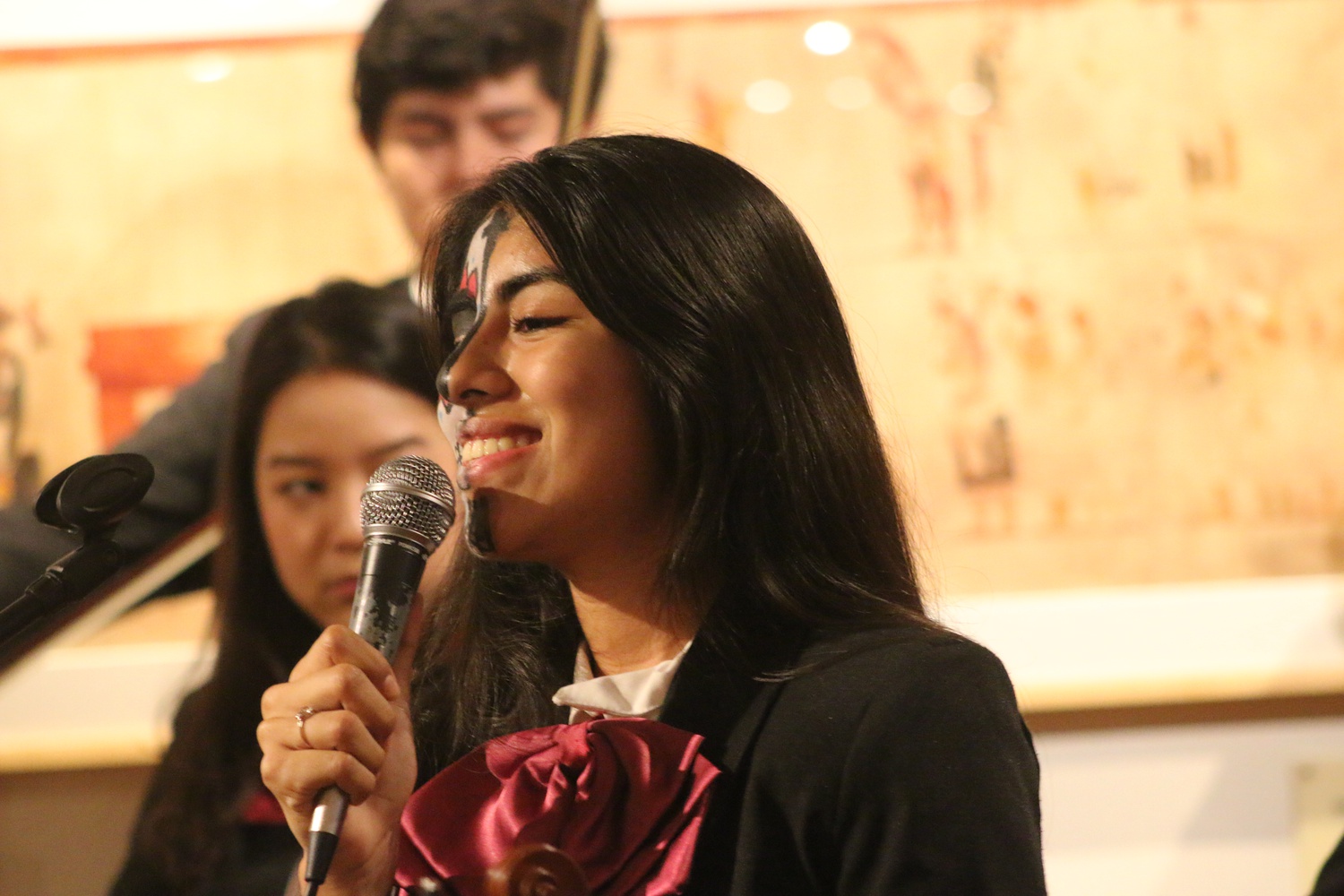 A photo of Ramirez performing with Mariachi Véritas de Harvard. By Courtesy of Bridgette Ramirez
By Lance R. He, Contributing Writer

Bridgette C. Ramirez ’22 is the president of Mariachi Véritas de Harvard, Harvard’s student-run mariachi band. A member of the organization since freshman year, Ramirez plays the violin and vihuela, a traditional Mexican guitar-like instrument. The Harvard Crimson spoke with Ramirez about her favorite performance, fostering virtual community, and the future for Harvard Mariachi Veritas.

The Harvard Crimson: So Bridgette, as the president of Mariachi Véritas, could you share with us a little bit about who you are and what Mariachi Véritas does as a band and organization?

Bridgette Ramirez: As the president of Mariachi, I am in charge of being the face of the band on or off campus, trying to find gigs, and actively putting us out there for the greater Harvard and Boston community to know who we are. As a band, we try to put forth a different image of what Mexican culture is by bringing students from all kinds of backgrounds, from all races, ethnicities, nationalities and with all kinds of experiences with instruments into one group — and then put music out for all kinds of communities to listen to and learn from. It’s a small tight-knit community. There are max like 15 of us at a time.

THC: Tell us a little bit about your own involvement in the band. What instrument do you play and what drew you to Mariachi Véritas?

BR: I came in playing the violin. My second year, I decided to take on an instrument called a vihuela. Honestly what I enjoyed most is that this band is a chance to take my mind off of school work and give space to explore something I’m really passionate about, which is music. At the same time, I was getting more exposure to Mariachi history, which is something very close to me, and I just enjoy how everyone is always there. You know each one of the other band members, so it’s like a second family from home.

THC: What’s an anecdote of your favorite memory as a member of the group?

BR: Last year — before we had to leave for quarantine and all — I think of the two years that I’ve been a part of the band, [we had] the best performance that I was a part of. The crowd was incredibly engaged! Before coming to Harvard, before joining the Mariachi band, I’d never experienced what it was like playing before a crowd and feeding off of the energy. At that concert, we had dancers from Harvard Ballet Folklórico de Aztlán come down, and they performed with us. It was just a really great environment. A lot of people were there for the second time; it was really nice to see familiar faces and also new ones. I was just so proud of the entire band because it was completely our efforts and it definitely showed through once we had our performance. It was a really great moment.

THC: You mentioned briefly how this concert occurred before quarantine began. How have social-distancing guidelines impacted your band’s practices and performances?

BR: Up until now, we’ve been mostly holding socials, trying to keep in touch with each other. Typically, we have two-hour rehearsals twice a week, but now we’re holding one-hour rehearsal with the section we’re in and one-hour rehearsal with the whole band. So we’re definitely cutting down rehearsal time a lot because Zoom fatigue is real and we don’t want Mariachi to be just another thing to hop onto Zoom for. Now we have the Day of the Dead, which is one of our most popular days of the year. We’re going to be compiling videos of us performing two to three songs, and we’ll be sending out equipment and traditional face painting in preparation for that.

THC: What do you miss most since quarantine began?

BR: I definitely miss rehearsals, but I think I miss our socials a lot more. Since there are so few of us, we would get to all bond together. Sometimes we would all just sit in a circle and talk at the same time. It’s great. There’s really no way to replace all that time and interaction. That’s been very difficult shifting to the new setting. Regardless of whether or not we’re active, as a group we are always staying connected. Our sense of family definitely shines through regardless of what’s going on.

THC: Once quarantine ends, what would be the first thing that you’d plan for the band?

BR: Our retreats are always the most memorable moments out of the entire year. So I’d definitely plan a retreat for us: just spending a few days cooking together, jamming out together, going to explore the city together. Our retreats have always been a really great memory of our year, so it would be a great way to just reconnect and realize that we’re all still okay and that we’re all excited to be back and be together. We used to see each other a lot throughout a week and suddenly to just cut it off and to not see these people anymore is a huge hole in our lives. Some really quality time together would be the first thing I’d plan for us when we get back.