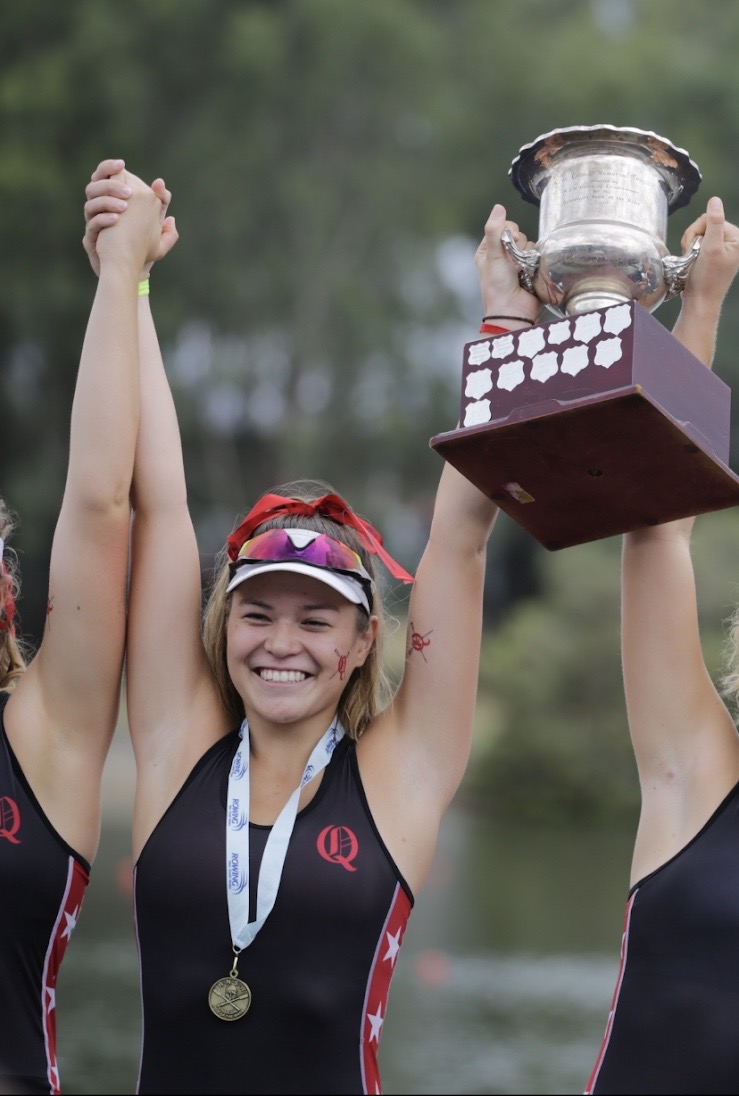 First-year rower Alex Smits celebrates a victory with teammates in Australia, and she is hoping to do the same in Cambridge sometime in the not-so-distant future. By Courtesy of Alex Smits
By Mairead B. Baker, Contributing Writer

In a normal year, first-year student-athletes must find a balance between academics and athletics. And while this year is different in many ways, first-year athletes are not taking this period of uncertainty as time off from training even as their competitions have been canceled. You might find some on-campus student-athletes running along the Charles, waiting for their team’s designated time slot to lift in Harvard’s athletic facilities, or following Google docs with workouts prepared by their coaches.

Many of those incoming international students were recruited athletes hailing from around the world.

“I was kind of expecting it. I wasn’t that surprised—I was sad, but I knew it was coming,” said first-year Alex Smits, who hails from Sydney, Australia.

Smits was set to begin her first year on the women’s heavyweight crew team. She now finds herself juggling between training, school work, and balancing the time zone difference.

“My first class at the beginning of the semester was at 5 a.m., and that was three days a week. But we’ve had daylight savings, so all of my classes moved up one hour, so then they started at 6 a.m. Now they will move up to 7 A.M, which has actually been really helpful.” Smits said. “At the beginning, I was okay with the 5 a.m classes because rowing starts early as well, so on a normal day I would be getting up early anyways.”

Dany Zapata Rincon, who was born in Colombia but grew up in Sydney, Australia, is a first-year on the women’s water polo team. Rincon, too, has faced difficulty in planning class times due to the time zone difference.

“I managed to get all my classes in the morning, but it was a bit upsetting because some of the classes I wanted to take were in the middle of the night,” Rincon said. “I kind of had to choose my classes based on how appropriate the times would be for me.” 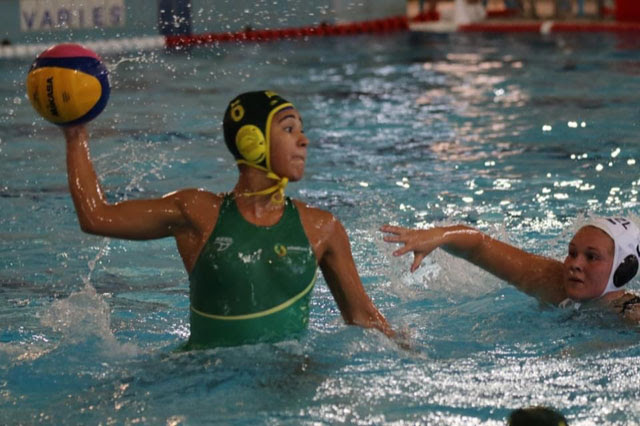 First-year water polo standout Dany Zapata Rincon, pictured above winding up a shot, has tried to find the silver linings that come from training and studying Down Under, halfway across the world. By Courtesy of Dany Zapata Rincon
Advertisement

On top of training and schoolwork, first-year international students are also missing out on the social aspect that only an on-campus experience could provide.

“Say I wanted to study and do one class in a café and walk back to the dorms, I could walk with someone and chat on the way,” Rincon said. “If I want to do it on Zoom, I have to allocate a whole hour or thirty minutes just to talk to someone. You don’t get those little 10-15 minute breaks, and it kind of adds up on your time. It's been hard.”

Martin Kulesza, a first-year on the men’s heavyweight crew team from Melbourne, Australia, dealt with the same issue when choosing his classes.

“There were certain classes that I wanted to take, but I couldn’t, due to the fact that I didn’t want to manage classes at pretty ridiculous hours and whatnot,” Kulesza said. “As for some classes I had to forgo and not end up doing and save them for a later semester, probably when I’m on campus.” 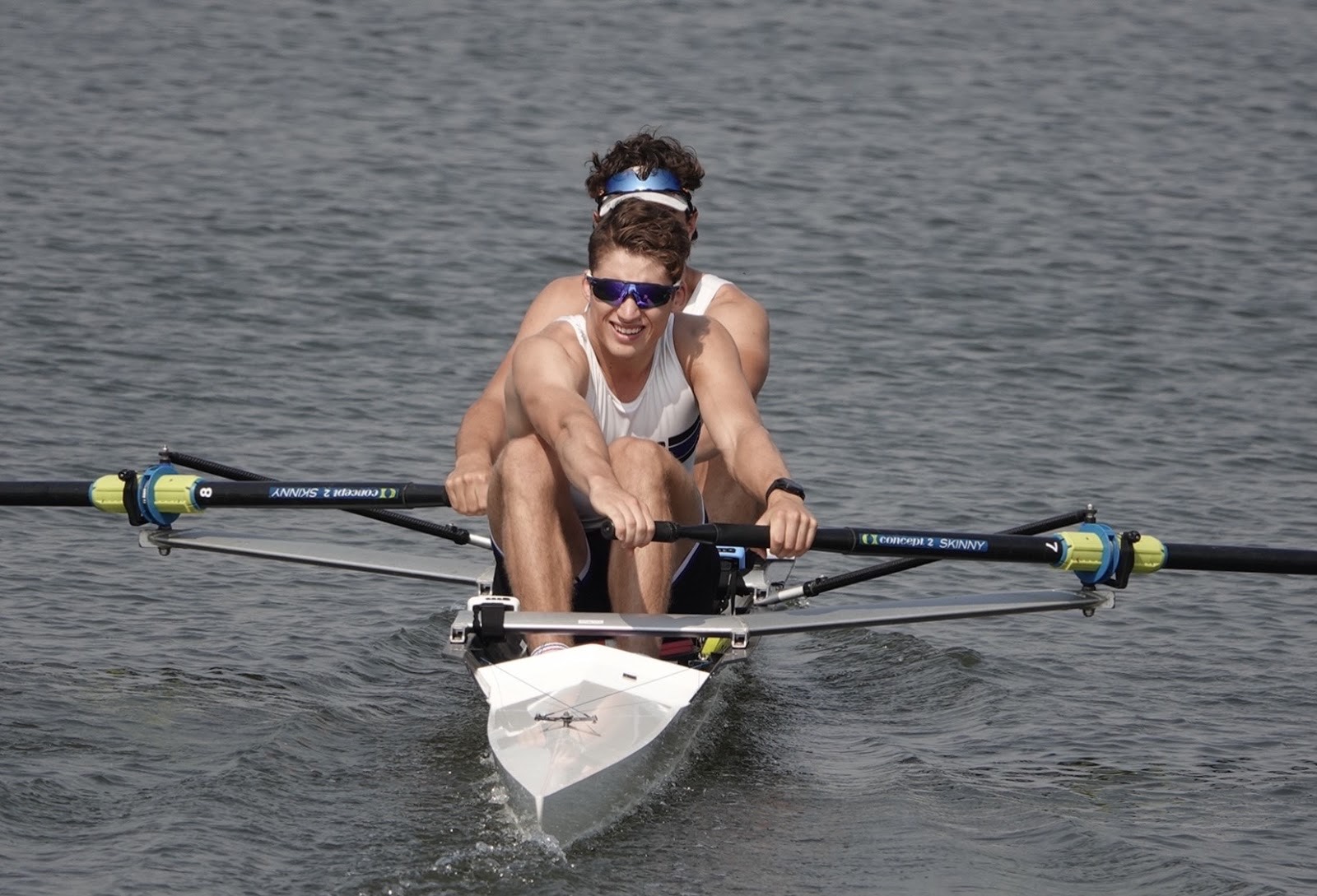 First-year rower Martin Kulesza is keeping up with his training regimen from Australia while attending Harvard classes at odd hours due to the significant time difference. By Courtesy of Martin Kulesza

Kulesza not only had to take the time zone difference into consideration when choosing classes, but also the time he would be spending training on the water.

“It just makes it hard for picking classes and stuff like that because it gives me a very limited choice in what I want to do,” Kulesza said. “I'll use expos for an example. I think there were 30 or 40 expos topics of interest, but my choices were shortened down to five because of the time zone difference. All the other ones occurred between around 1 a.m. and 5 a.m., which I can’t really have considering I'm on water most days at 5:45 a.m.”

Despite the difficulty in choosing classes, all three athletes have maintained their training and determination to keep fit for a future season. The NCAA made the decision to loosen rules regarding outside competition, making it possible for athletes to be a part of a club and compete on a team. Smits is a member of her state’s rowing team and has already participated in a few regattas.

“I think if I wasn’t able to race, I would have been so much less motivated to row. I feel like if you don’t have a goal, you are just like training for nothing,” Smits said. “It's a pretty good program, and I’m confident that once I get onto campus, eventually, I’ll be prepared.”

Due to restrictions on spectators, her regattas are recorded and live-streamed on Youtube.

“Normally I send the link to my parents, and they can watch it on their laptops at home, which is nice.”

Similarly, Kulesza has kept up with rowing. The odd hours of class time, however, have made it difficult to schedule time on the water.

“At the moment, I’m having to miss certain training sessions to accommodate having classes at midnight and whatnot,” Kulesza said. “I can’t train as much as I'd like to, or train as much as I really need to be in order for me to try and make a high-level team later in the year.”

Amidst the strain in taking on their first year at Harvard remotely, these athletes have used the void of being on campus to turn their attention towards competing for Australia’s state and national teams.

Smits hopes to try out for the national team, something she would not be able to do if she were on campus this year.

“If I can’t get on campus next semester, it's nice that there is at least something here for me,” Smits said. “Obviously it's not the same, but that's the way that I have thought about it. If I can’t go there, then at least I can do these things and have the opportunity to do that.”

Kulesza is determined to try out for a national team if he stays in Melbourne.

“I've kind of made up the decision that if I have the option to stay here, I'd definitely stay back in Melbourne and go for any team that I can here.”

These three athletes remain resilient in not only their commitment to preparing for an upcoming season in Cambridge but also in the way that they have adapted to a less than ideal first year in college.

“It leads to growth, right?” Rincon said. “I'll have learned a lot of different skills because of this, and I am not the only one. You do the best you can I guess.”