What the Hell Happened: Alexandria Ocasio-Cortez Streams 'Among Us' on Twitch 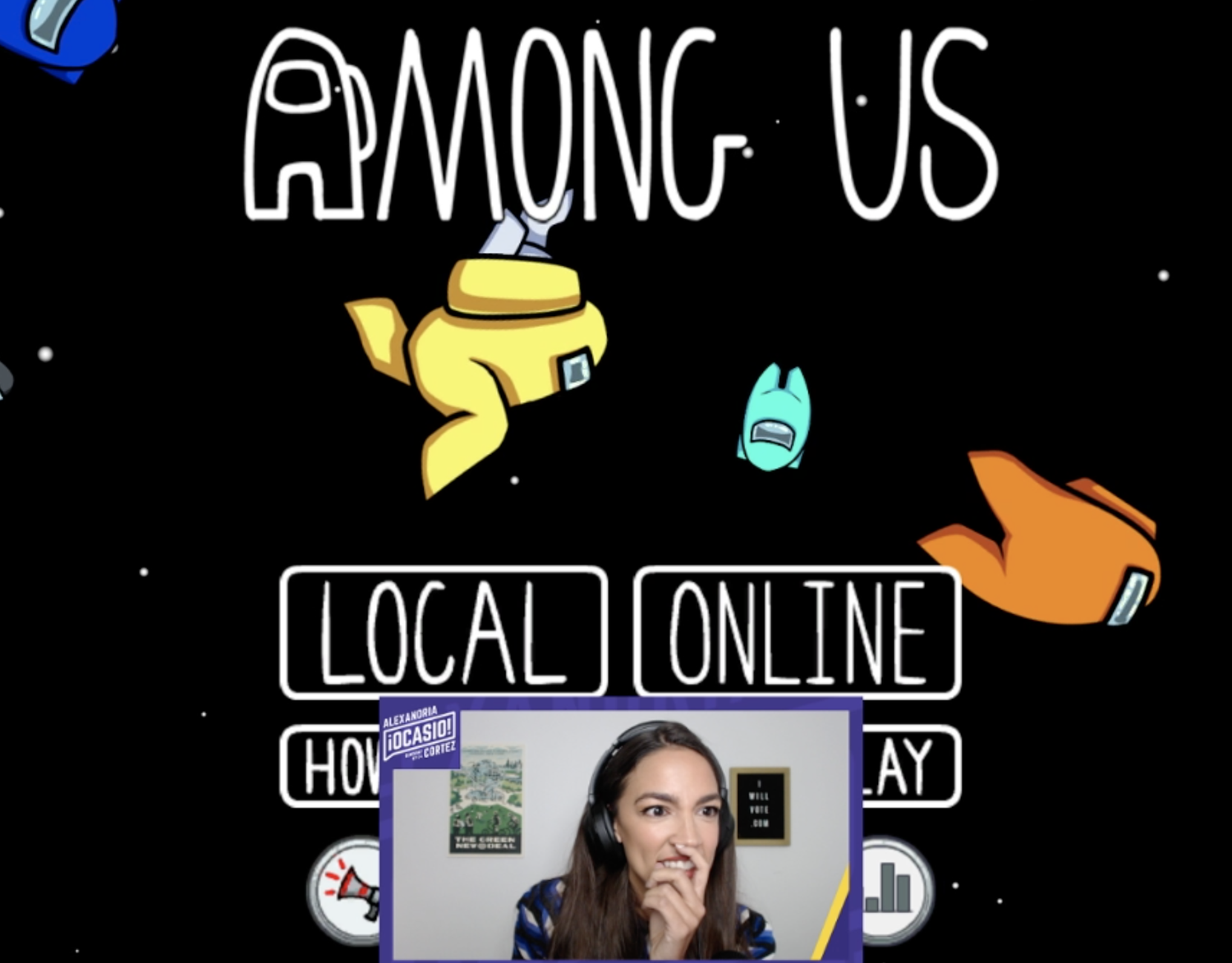 This statement epitomizes the social, viral, and political milieu currently surrounding Generation Z like no other. When it’s your first time playing the immensely popular video game “Among Us,” let alone your first time assuming the role of the notorious “Imposter,” it’s hard not to be suspect. But U.S. Representative Alexandria Ocasio-Cortez fared well in her first game before being ejected off a digital spaceship and into internet stardom, marking a rare instance in which a politician harnessed youth platforms and tools to advance a cause without coming across as decidedly “sus.”

After tweeting her intention to play “Among Us” to the tune of nearly 400,000 likes Ocasio-Cortez proceeded to set up an account on Twitch, the leading streaming service for video games. The following day, Ocasio-Cortez joined other Twitch stars for several hours to encourage increased voter turnout and, well, have a good time — her electioneering taking the form of banter and finger-pointing in virtual town halls. A typical Tuesday evening for your average United States Representative.

Not including the audiences of fellow streamers, Ocasio-Cortez’s stream drew more than 430,000 concurrent viewers and nearly five million total views over the course of three and a half hours. Ocasio-Cortez now lays claim to the fifth-most watched individual stream in Twitch’s history, joining an elite company of streamers on the platform. (Whether the quality of AOC’s discussion rivals that of Ninja’s with Drake is a highly contested topic among political commentators.)

A democratic socialist from New York, Ocasio-Cortez has risen to prominence as the voice of a politically-dismayed youth and “the de facto spokeswoman for the historically diverse 2018 midterm class.” The youngest woman ever elected to Congress, Ocasio-Cortez’s departure from the traditional congressional demographic and clashes with older Democrats and Republicans alike have cemented her status as a champion of progressive politics. Bestowed with the endearing title “AOC,” the Representative has garnered a mythic status among Gen Z-ers.

Ocasio-Cortez’s online presence and know-how has certainly aided her in the popularity contest with the nation’s youth. Even in her first attempt playing “Among Us” — a game in which Crewmates aboard a spaceship must work together to uncover one or more Imposters, whose goal is to avoid suspicion while covertly eliminating everyone else — Ocasio-Cortez demonstrated considerable proficiency, employing such youthful vernacular as “sus” and “marinate” in playful conversation with her fellow streamers. Launched in 2018 to meager reception, Among Us recently became a quarantine must-play — downloads rose approximately 600% late this summer as people grew tired of baking sourdough and sought respite in interstellar gaslighting.

Ocasio-Cortez’s online celebrity is unparalleled and unprecedented among today’s politicians. Many don’t know how to act on this stage — how to ride the fleeting waves of internet virality, capturing the snowballing attentions of millions with short attention spans. Even Bernie Sanders, a popular figure with Gen Z in his own right, could only amass a paltry 150,000 Twitch subscribers to Ocasio-Cortez’s 700,000. And when politicians attempt to enter adolescent spheres, even in ways as innocuous as being relatable on social media, it usually doesn’t go over quite well. Think Hillary Clinton asserting her hip-ness by posting a Mannequin Challenge on Twitter. Think John Delaney proving he’s your average Joe by posting a workout video to the same platform, jumping in silence for a full minute. And remember Ted Cruz challenging Jimmy Kimmel to basketball one-on-one — you guessed it — on Twitter? Surely, these digital moments made you want to race to the polls.

Yet Ocasio-Cortez engaged with youth skillfully, and her goal of getting out the vote seemed to work: her stream was the “#1 driver of traffic” to the website IWillVote.com during its duration. For the first time in a while, it seemed as though we could laugh with and not laugh at politicians dipping their toes in this unfamiliar virtual world — a world Generation Z has, until now, considered a bastion impenetrable to the pandering of technologically illiterate campaigners. To see normal people (or just young people) take on important political work and do so with grace was refreshing. Hopefully, the day will come once again when a politician seizes the reigns of the elusive beast of internet-stardom to foster genuine engagement with civic duty instead of making a laughing stock of themselves. Until then, we’ll all just be chillin’ in Cedar Rapids.