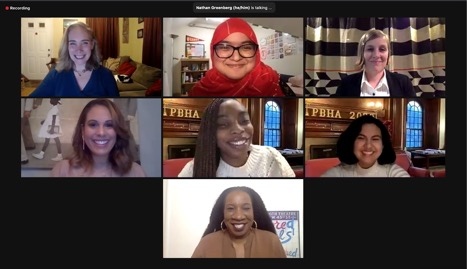 PBHA event coordinators lauded her advocacy work, spanning over 25 years, to address sexual violence, racial injustice, and systemic inequality. One of Burke’s most recent and well-known causes is the #MeToo movement, which has propelled survivors of sexual violence and their allies to the mainstream.

Oblio and Camacho first asked Burke to describe her journey as a social justice advocate. Burke said her path has been “all over,” though she feels privileged to have grown up in a family “steeped in black radical condition.” College, Burke added, was where she became the “Rah! Rah! person,” advocating boldly for any instance of injustice.

Burke said she now views her journey as having been centered on compassion, justice, and outspokenness.

“My journey was about loving us, was about equity, was about empathy — all of that sort of converging, and saying I’ve got to step out boldly, even though I’m not an expert,” Burke added.

Oblio and Camacho then turned the conversation toward Burke’s most recent and most famous movement addressing sexual violence. Burke said she recognizes that sexual assault and harrassment can impact anyone, but that not everyone’s experiences are equally addressed.

“The thing that everyone should understand is that sexual violence does not discriminate,” she said. “The response to it does.”

Burke also discussed how the public should prioritize talking about sexual violence, given that the current social justice climate is focused on racial injustice, police brutality and the election.

The rise of social media and sound bytes, Burke said, has shortened our attention span. Nonetheless, Burke added, people must recognize that the social issues of the moment, like racial justice, do not exist in a vacuum; they are deeply connected to sexual violence.

“I’m almost mortified by the number of people who have said things to me like ‘Well, this is not a moment to think about MeToo; we really have to focus on Black lives,’” Burke said. “You cannot have a conversation about racial justice in this country that’s not connected to sexual violence, to gender-based violence. Those things are inextricably linked.”

While discussing her approach to change, Burke urged young organizers not to be discouraged by small attendance numbers at meetings or events. Instead, she said, this generation’s activists should focus on thinking “outside the box” and making use of resources and technology to meet people’s emotional needs.

“When you’re doing work like this, this is not just hard work but this is heart work,” Burke said. “And so we have to think about our basic needs bigger than food, clothing and shelter.”

Not everyone will serve at the front lines, Burke added, but people in all professions should push for diversity and social justice within their fields. She called on non-activists to “be grounded” in the humanity of people who have experienced sexual assault and other victims of violence.

“I need you to be grounded in the humanity of these people who have been pushed to the margins,” Burke said.

In the Q&A session, Burke discussed the difficulties of organizational work and the importance of self-care for activists.

“Taking care of yourself is doing the work,” Burke said. “Don’t let anybody guilt you or make you feel different, make you feel lazy, make you feel less than because you will come back, refreshed and ready. We don’t want people who are tired and believe beleaguered at the front line.”

Burke also said she does not want the public to designate her as the figurehead of the #MeToo movement forever. She challenged PBHA students and the audience to push back on the ideas of older generations of activists, including her own.

“You should be like, ‘I listened to Tarana Burke. She sounded good, but it made me think of a better and different way we can do that,’” Burke said. “That’s what I need you to be committed to: what’s better, what’s next, what’s necessary, because this journey is long. It’s long. We’re gonna be on it for a long time so we have to keep it fresh.”