No Campus? No Problem: The Radcliffe Choral Society’s COVID Experience 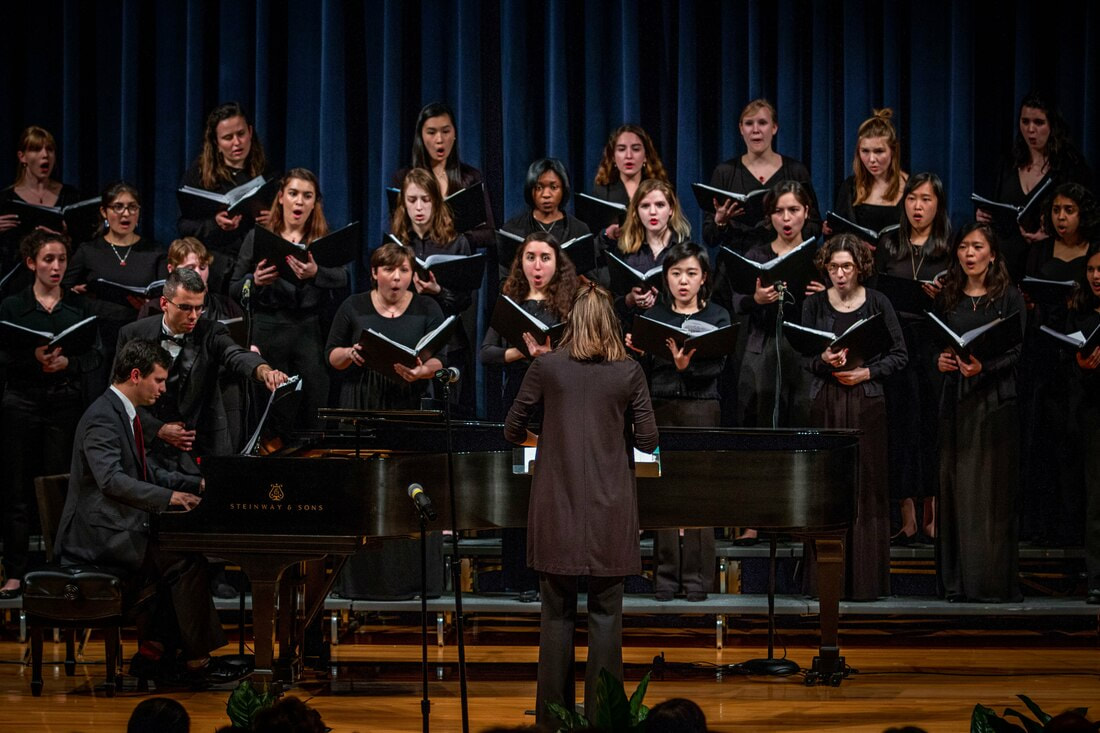 Despite the overwhelming challenges faced by Harvard student groups operating in the pandemic, the Radcliffe Choral Society (RCS) has hit the ground running this semester. The music group is finding its rhythm, adapting to meet both the social and technological demands of a digital college experience. With no in-person performances on the horizon, RCS has focused on fostering community through Zoom hangouts and using new technology to create a virtual environment for singing this fall.

As one of the three primary student choirs at Harvard, the ensemble has been singing soprano-alto music since it was founded in 1899 as the official chorus of Radcliffe College. However, in its long tenure of performing everything from classical music to original commissioned pieces to contemporary a cappella, the Radcliffe Choral Society has never had to deal with most of its members residing off campus.

In a normal year, RCS members meet at least twice a week for more than four hours to prepare for two or three performances throughout the fall semester. But the members of the choral group do more than just sing.

“It’s a very social choir, as well, so in addition to our practices and rehearsals we go on a retreat together to Cape Cod every year, we hang out a lot on campus, we go to Boston together,” said Madison L. Fabber ’22, one of the group’s vice presidents and a contributing writer for Crimson Arts.

The group’s social dynamic, as well as the actual mechanics of singing, have been upended by the pandemic.

“It’s hard,” Fabber continued. “While not everybody who’s in RCS was in a choir before RCS, a majority of our choir is used to practicing together all in the same room. And it’s just, it’s really hard to describe how much it’s different when you can’t hear the people around you.”

“I think the challenge is, obviously, not being in person just changes the environment that you have when you’re singing,” Li said. “During rehearsal, we’re singing in a room by ourselves, usually on mute, so it’s not just that you can’t hear other students around you, it’s that you’re not even being heard.”

The Society has begun investigating digital avenues for making music together. Li noted their use of a program called Soundtrap, which functions “like Google Docs but for music.” Soundtrap allows members of the ensemble to record themselves singing and upload it to a shared workspace.

In addition to partaking in RCS’s more technical activities through Soundtrap, members like Fabber and Li are attempting to restore some semblance of social normalcy by designating portions of rehearsal time for checking in with one another. Rachel L. Ma ’21, the manager of the group, mentioned that “it’s tough being virtual” but highlighted activities the club has arranged to connect beyond their choral work.

“Last week we had a fun little, ‘take three minutes, come up with a costume, and everyone come back on Zoom and let’s see what people have come up with,’ just to make sure we’re staying in touch,” Ma said.

Fabber said she thinks fostering a sense of community is essential to building a cohesive choral unit.

“I’m pretty sure this is not scientifically proven of course, but choirs just sound better when everybody knows each other and feels comfortable with each other, because you take more risks vocally and you feel comfortable,” she said.

Li discussed having a similar community-oriented experience, emphasizing the group’s enthusiasm and desire to stay connected.

“Someone last week was like, ‘Oh, who wants to start a knitting group?’ And then she made a Slack channel, and we’re going to meet and knit for an hour every Friday over Zoom,” Li said.

As for sharing their talents with the Harvard community this fall, Fabber noted that the group had not yet finalized its plans for concerts.

College students are tasked with navigating unprecedented circumstances in order to socialize this year, and the effects of transitioning to a digital learning environment have extended far beyond the classroom. Members of the Radcliffe Choral Society, however, have managed to rise to the occasion and enjoy a socially distanced, yet fulfilling, choral experience this fall.