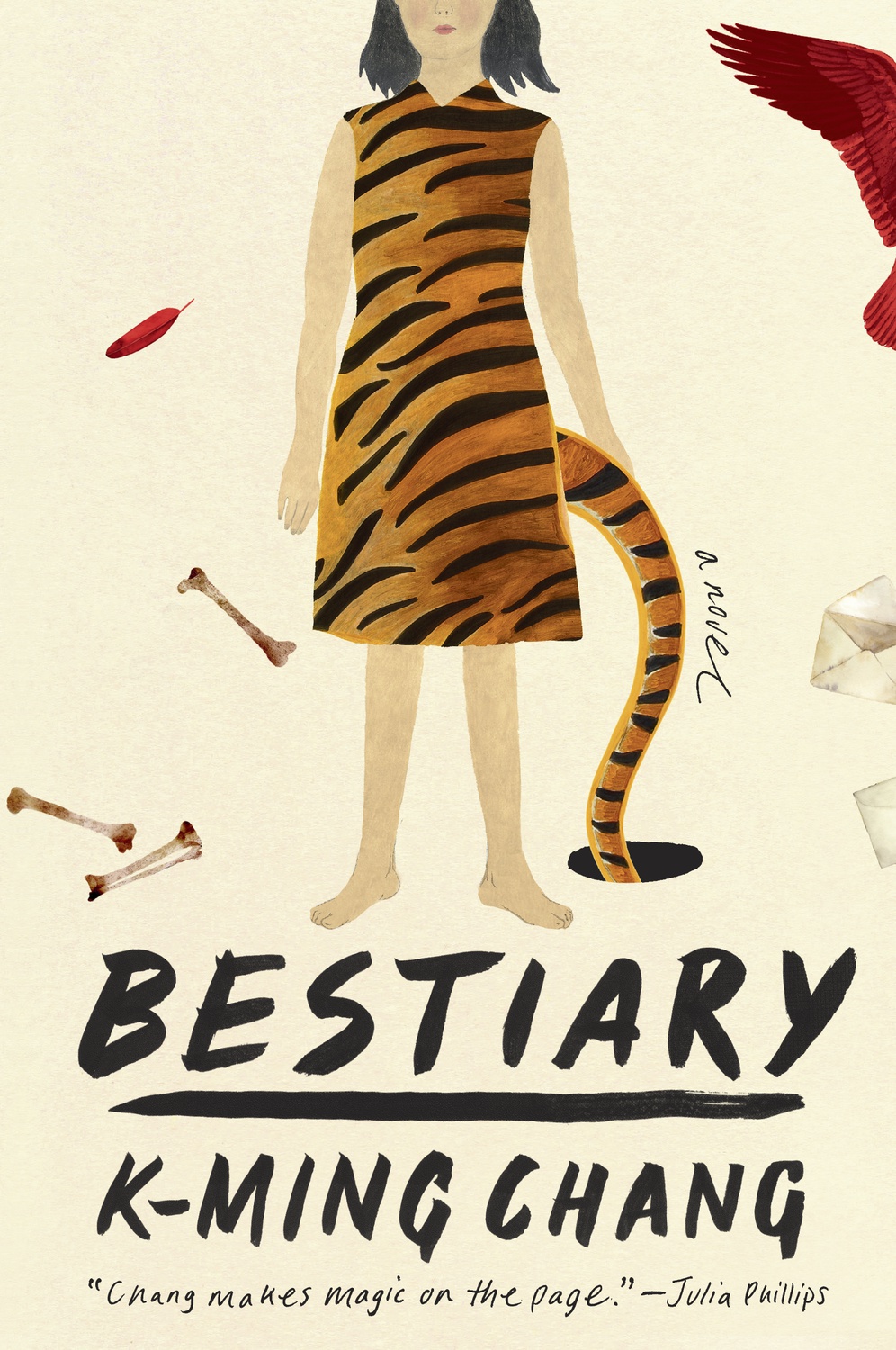 There is an intimate universality reserved for stories with nameless characters.

In K-Ming Chang’s debut novel “Bestiary,” characters are defined not by their given names but by their surreal, otherworldly qualities. The speaker’s tiger tail, which begins to grow as she enters puberty, expands into an embodiment of protection, female sexuality, and matrilineal inheritance. A father and son, enmeshed in an abusive relationship, ascend to the sky like kites and tussle in the wind. The breathing, mythic holes in the speaker’s backyard conceal flashes of skin and scraps of words, serving as a dynamic intermediary between the speaker and her estranged ancestral past.

Chang’s story opens with her unnamed speaker recounting her family’s search for lost gold. From this collective — and largely futile — search for treasure emerges motifs of burial, reinvention, memory, and dispossession that serve as key threads in the novel’s broader textual fabric. An inward-facing, temporally non-linear narrative, Chang’s prose moves freely from past to present, daughter to mother, China to America to provide a sweeping, detailed portrayal of the psychic complexities of migration, loss, and love.

Two themes cohere Chang’s story: hunger and holes. Both convey a sense of profound emptiness that exemplifies the speaker’s interior restlessness. The holes in Chang’s narrative demonstrate the obscure ways in which life twists on itself, taking in the ordinary and spitting out the extraordinary. They also serve as sites of both burial and birth. As the speaker’s mother “Ma” admonishes, “You think burial is about finalizing what’s died. But burial is beginning: To grow anything, you must first dig a grave for its seed.” It is in these moments of thoughtful symbolism that Chang’s prose shines: Each image is intentional, and even the most radical literary choices make sense.

To reflect on Chang’s text without exploring its use of magical realism would be deeply remiss. Throughout the story, the literary technique illuminates dimensions of hunger, at once sources of depletion and vitality. The speaker’s hunger is cultural, sexual, and emotional: As Chang writes, “the price of having a body is hunger.” The myth of Hu Gu Po, a tiger spirit that seeks human vessels by slipping into the bodies of women, is a mythic tale that connects the women in the speaker’s ancestral line. Hunger manifests not merely as a drive to explore one’s sexuality or connect with others but, rather, as a visceral emptiness that emerges from displacement and solitude.

At its core, Chang’s is a story that affirms the ability of creative, unconventional language to enliven and elevate a text. Through weaving together multiple narrative voices and poeticizing her language, she challenges and at times even reimagines the potential of prose. At once a creation myth, genealogical record, and epistolary confession, Chang’s novel elucidates the unruly vitality of its characters while begging the questions: What is a story, anyway? How can one best preserve in writing the wildness and non-linearity of memory?

Chang’s text probes the physical and cultural effects of linguistic possession and, perhaps more importantly, dispossession. As the speaker reminisces on her mother’s past, she reflects, “Except Ma doesn’t measure her life in years but in languages: Tayal and Yilan Creole in the indigo fields where she was born blue-assed and fish-eyed, Japanese during the war, Mandarin in the Nationalist-eaten city.” A linguistic chronology runs through Ma’s life: She organizes her existence in seasons of tongues.

Chang’s text is also an exacting exploration of the body and its impulses. Deeply aware of how the body is often reduced to a site of shame and distrust, Chang works to counteract this cultural paradigm in her prose. She approaches the body as a somatic archive and employs animalistic symbolism as a means of underscoring the complexities of her speaker’s restive body: “Mothers ago, I was a beast. I stalked whole countries to eat. I plotted their shores with my teeth.”

The second epigraph for Chang’s novel — a quote by lauded Chinese-American writer Maxine Hong Kingston — reads, “There is detailed doubt here.” Indeed, Chang’s prose is at times uncannily reminiscent of Kingston’s literature, in particular her memoir “The Woman Warrior.” Both utilize magical realism as a means of accentuating the emotional and historical complexity of second-generation Chinese-American immigrants; both interweave mythologies of heroic women as foils for their young female protagonists.

In keeping with Kingston’s phrase “detailed doubt,” Chang employs her speaker’s ambivalence — toward her dual cultures, her family, her own body — as a means of poetic inquiry. However, there are times at which the rich prose seems overbearingly descriptive. Chang’s language, laden with imagery and lyrical diction, occasionally meanders, unsure of its direction or broader contextual function. Through her extended use of magical realism, everything becomes a metaphor. At times, one has to slash through semantics to grasp the narrative’s underlying ideas.

The story also occasionally lends itself to jarring fragmentation. Chang’s jumps in time, speaker, and geography periodically confound — the anonymity of her characters, though an essential literary choice, can render the prose cluttered and confused.

Ultimately, Chang succeeds in relating a deeply felt, richly poetic evocation of hunger, grief, and love. Hers is a text built not merely on the premise of trust but, equally important, on the creative potential of distrust. Through the surreal ways in which her speaker charts ways to understanding, Chang interrogates not merely what we know but how we arrive at knowledge itself. It is in these rich questions — ones that manifest in poems, magical holes, gossamer kites, and tiger tails — that the audacious, artful musicality of Chang’s prose stuns.