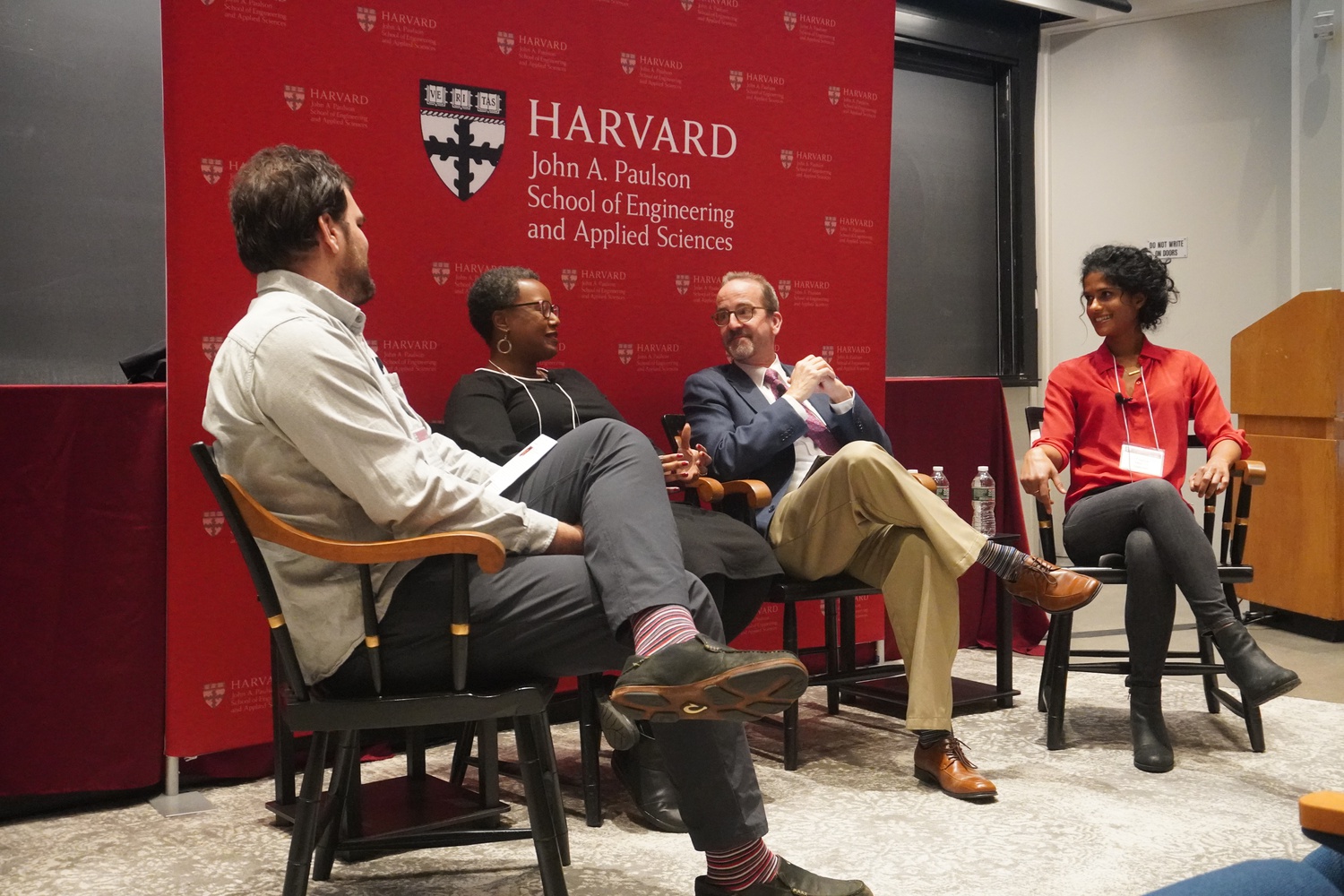 Dean of SEAS Francis J. Doyle III kicked off the convocation by welcoming attendees and sharing statistics about the SEAS Class of 2022. The incoming sophomore class of 367 students is the largest group to declare SEAS concentrations in the school’s history, Doyle said.

“Half of you picked Computer Science,” Doyle said, to chuckles from the audience.

Doyle also emphasized his commitment to diversity at SEAS in his remarks. Describing the current gender imbalance within the School — which comprises 38 percent women and 62 percent men — Doyle insisted that SEAS administrators are “not going to rest until we really reflect the College.”

Doyle also showed attendees video and photo previews of the new SEAS Complex in Allston, which is set to open for classes in fall 2020. He said the space is intended to be “not only a facility for all of SEAS, but also for all of Harvard.”

The landscaped courtyard behind the complex will be comparable in size to Harvard Yard, Doyle added.

“We have space for student clubs,” he said. “We never before had dedicated space for the offices of various student groups. We have garages for the car projects and robotics projects. We have a flying laboratory for drones, two and half stories tall. We have a makerspace.”

Later on in the event, three SEAS graduates — Kharma C. Foucher ’96, Michael A. Mancinelli ’15, and Trisha R. Paul ’13 — spoke on an alumni panel about their Harvard experiences and post-graduation careers.

Mancinelli urged students in the audience to “test hypotheses” and explore a wide variety of opportunities to discover their interests.

“Those internships or summer research experiences are a great way to kind of apply the scientific method and do some hypothesis testing — what type of industries are you interested in?” Mancinelli said. “Test the hypothesis and keep collecting data points and develop your passion.”

In a reception held after the panel, the concentrators spoke with representatives from various student organizations — including the Harvard Undergraduate Robotics Club and Harvard Computer Society — and met fellow SEAS concentrators.

“Every time that Dean Doyle speaks, I get so excited about what the future of SEAS is,” Emmy Semprun ’22, who attended the reception, said. “Even showing us Allston and how much we have grown from when it started and we weren’t here.”

Semprun also said she appreciated the diversity of the alumni panel and enjoyed hearing about the experiences of women in engineering.

“My favorite thing also about this is there was a panel of three people and two of them were women, and they were women of color, which is incredible to see, especially as a girl in engineering,” she said. “Like, sometimes you kind of get lost in the crowd, so it’s always great.”

Spencer C. Rolland ’22, another newly declared SEAS concentrator, said he appreciated how the alumni panel offered insight into the connection between life as a Harvard undergraduate and life after graduation.