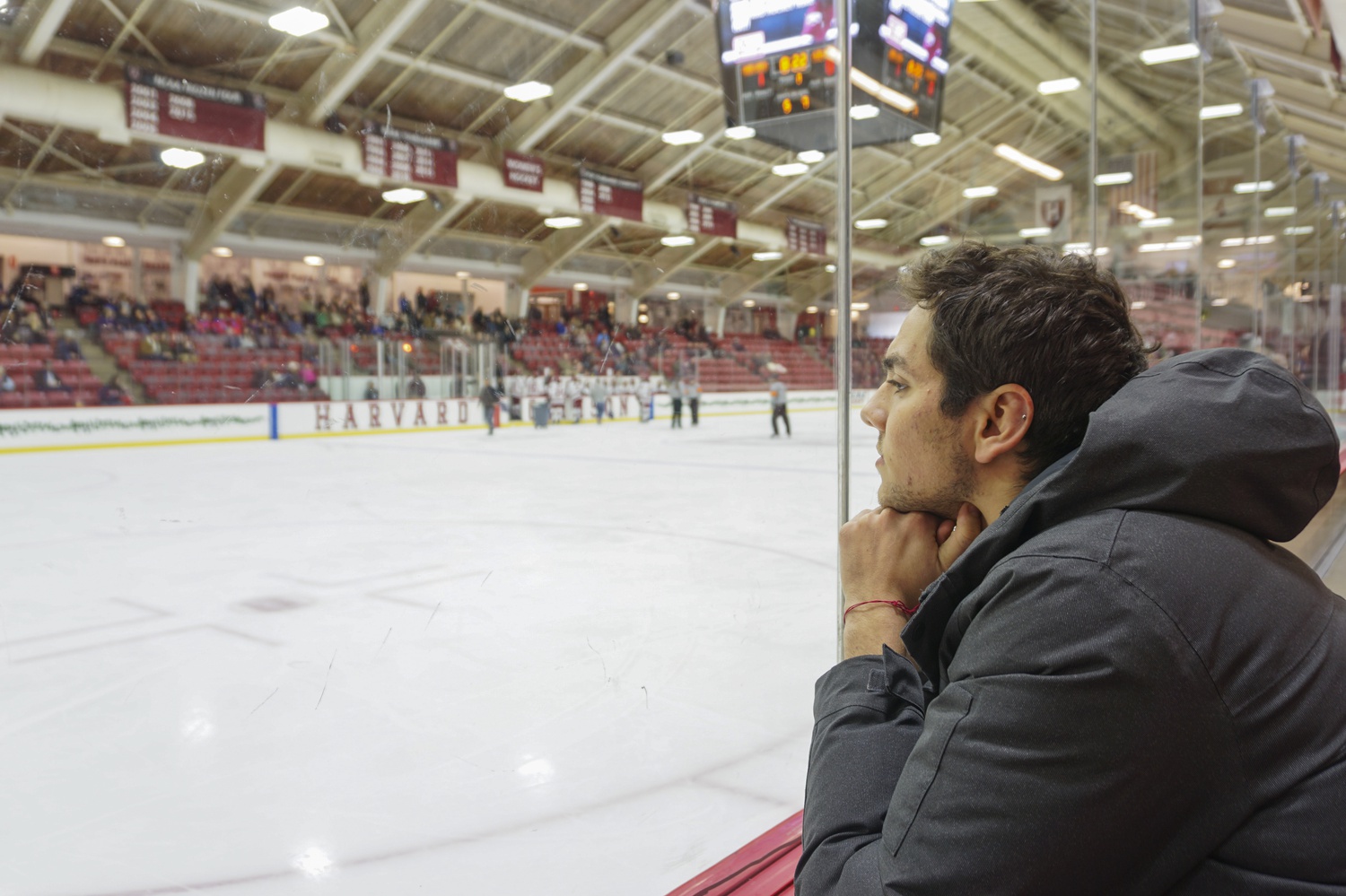 Staff writer Alec P. Kahn stares into the transparent glass that encases the rink and looks into his reflection. By MyeongSeo Kim
Advertisement
Advertisement

What Are Sports? An Intrepid FM Reporter Inquires

"Players circle the stick without a second thought. But I see you, stick. Your wood is scuffed with the markings of love and life, beauty and pain, paint worn along the edges. Some days, I am you. And others, sadly, I am the player. As I face the rink, a single tear rolls down my rosy cheek."
By Alec P. Kahn

In the ice rink, the air is cold — ice cold, colder than a moonlit walk along the Charles past the stroke of midnight, colder than the hearts of those investors who shut down the beloved stores of Harvard Square. I take a seat among the huddled spectators, all of us decked in our bright winter coats.

We here at Fifteen Minutes magazine have never shied away from investigative reporting — we have what they call “range.” We’ve covered everything from the changing face of Harvard Square, to that one fungi exploratorium. Therefore, after being informed that there are in fact sports events at this very school, my editors decided that I needed to cover such an event, the FM way.

The next day, I found myself in a strange wintry land across the river, otherwise known as the Harvard Women’s Hockey game. If you’ve never been to a sports game, let me tell you, it is exactly like the theatre. According to the spectators around me, the two teams are attempting to “score” upon each other, and the player decked in those large, boxy, postmodern pants defends some variation of a ball from going in a net.

Perhaps those are the rules, but only for the casual observer. Not for me — the writer, the artist, the enlightened academic who’s read a few too many Virginia Woolf novels. You see, this is the very reason I decided to join FM, the elect group of individuals who surpassed a completion comp: to offer an adroit literary analysis of the mundane, the ordinary. My craft allows me to peer beneath any moment’s frigid surface. In my eyes, two opposing clans dazzle the icy stage, each attempting to dominate the other. The event is so Wagnerian, so Shakespearean, so French-aristocrats-vying-for-power-in-Versailles. 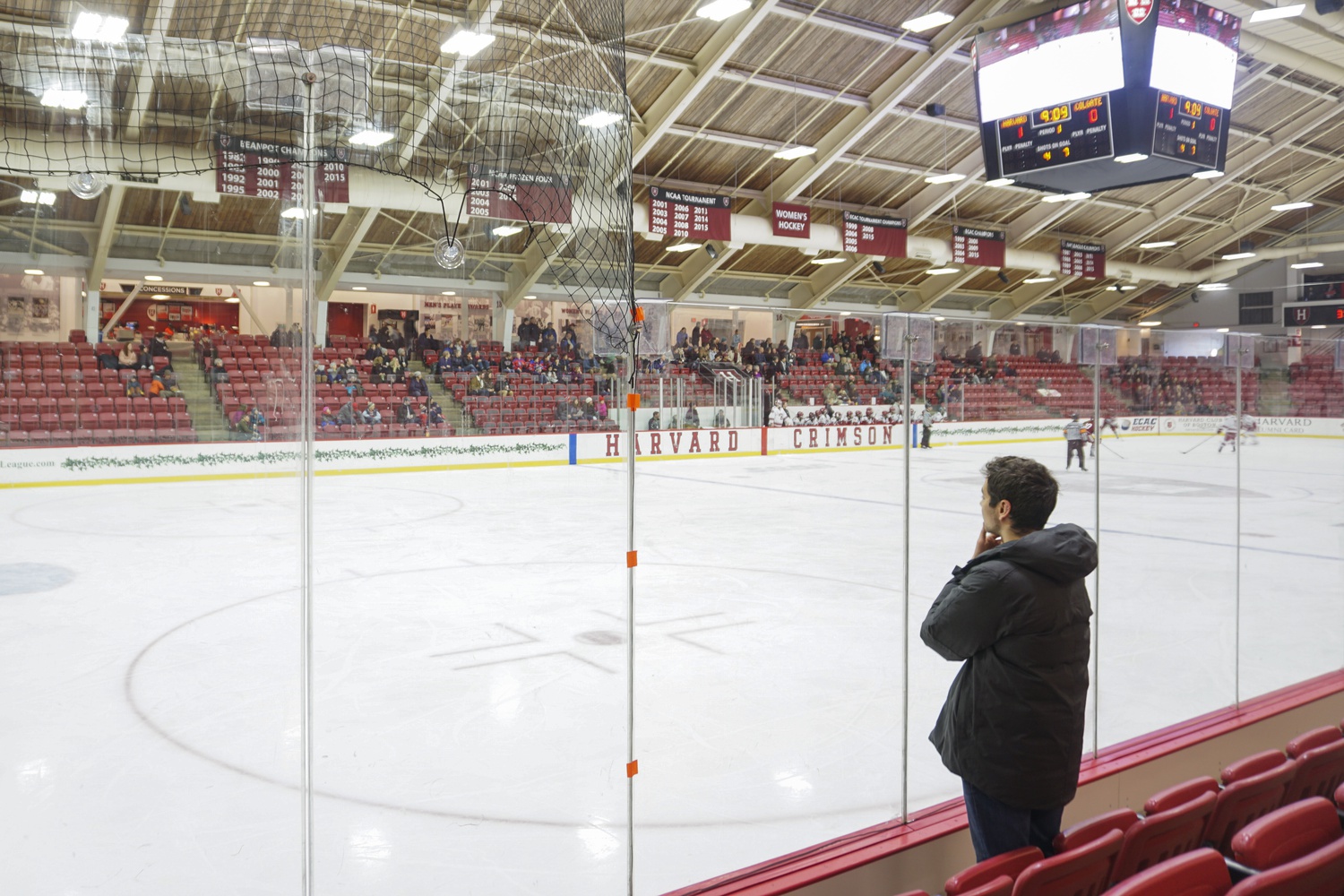 Women's Ice Hockey snatched a victory 4-3 against Colgate on Saturday afternoon at the Bright-Landry Hockey Center. Although the game has started, there are no players in Alec's visual field. By MyeongSeo Kim

One of the most striking rules of the game involves the “penalty box.” A Harvard player has evidently broken a rule, so she must enter the tiny glass cage and wait out her brief sentence. The game demands conformity! It says no to the rulebreakers, no to a life lived outside the narrow confines of societal expectation! I try to peer into the eyes of this subversive player, but her face is guarded with a caged metal mask.

But alas! My editors have urged me to demonstrate my versatility as a reporter, so back to the match. In the first period, the Harvard Crimson strike the puck into the webbed netting of the opposing team.

But then, in the second period, everything changes. Someone drops their hockey stick. The stick lies bare on the ice rink — alone, abandoned. An object stranded in a whirlwind of violence and strife. Players circle the stick without a second thought. But I see you, stick. Your wood is scuffed with the markings of love and life, beauty and pain, paint worn along the edges. Some days, I am you. And others, sadly, I am the player. As I face the rink, a single tear rolls down my rosy cheek.

Suddenly, as I stare into the transparent glass that encases the rink, I see my reflection. The icy stage has forced us to look upon ourselves as the spectators of this ludicrous performance. We are the audience. We demand that these clans dominate each other for our entertainment. We oblige the violence and discord that has left this poor hockey stick abandoned! No, no — I can’t do this anymore! How could they assign me this story? I can’t look upon the rink for another moment; I can’t participate in these immoral activities any longer! I stumble out of the theatre, sobbing into the crease of my elbow.

Perhaps FM should stick to the fungi exploratoriums.

—Magazine writer Alec P. Kahn can be reached at alec.kahn@thecrimson.com.