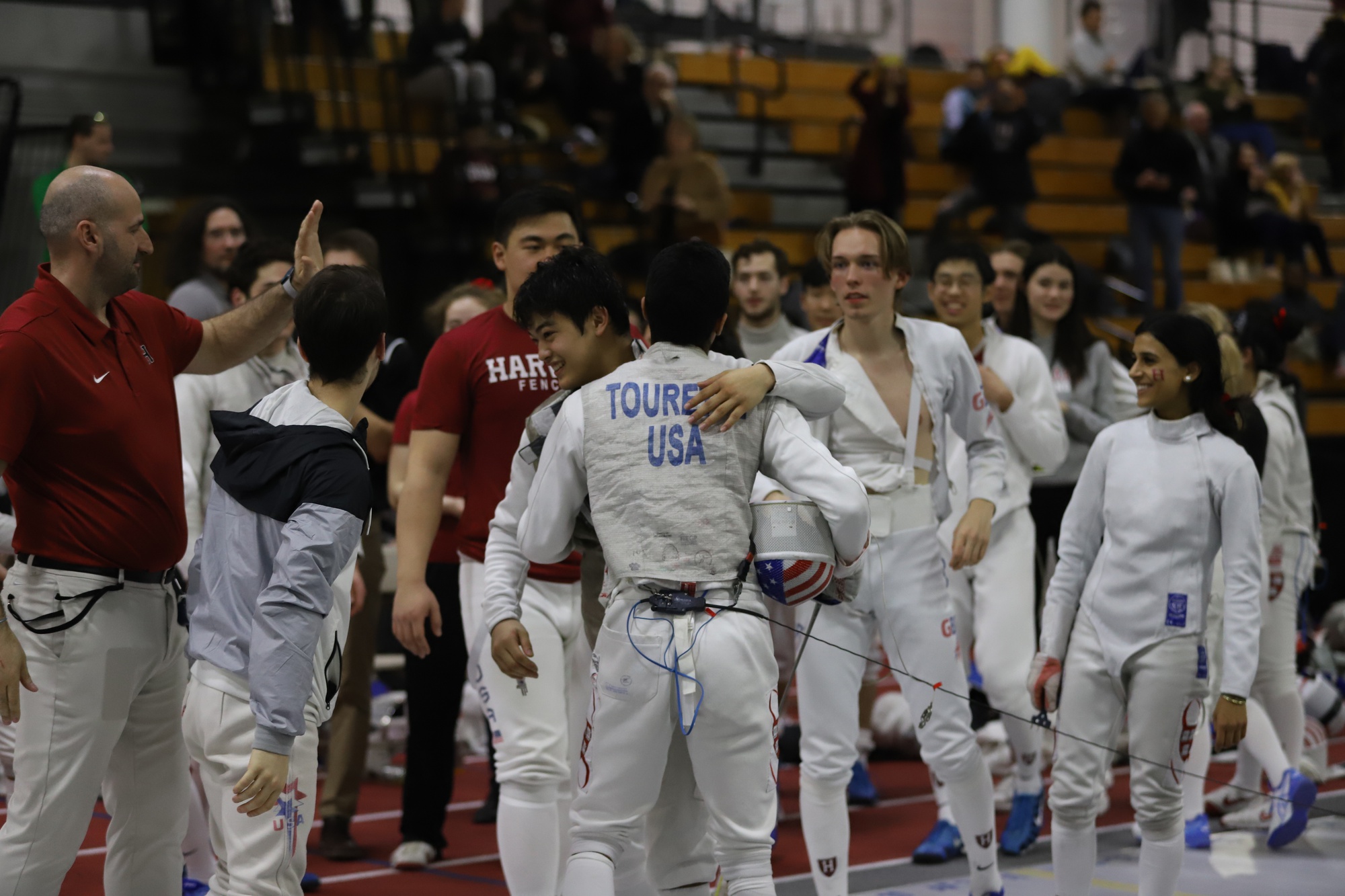 The men's fencing team rejoiced after Geoffrey Tourrete won his bout, remaining undefeated on the season. By Owen A. Berger
By Adam Xiao, Contributing Writer

On the men’s side, the team had a clean sweep of the competition, going 5-0. The men’s squad also had a clean sweep in individual championships at foil and sabre weapons. Captain Geoffrey Tourette finished first in foil, followed by first-year Kenji Bravo, and captain Duncan Rheingans-Yoo took third. First-years Mitchell Saron and Filip Dolegiewicz finished first and second respectively in sabre, while senior Erwin Cai came in third.

The highlight of the event for the men was a close 15-12 victory over No. 1 Columbia. Senior sabre Erwin Cai was down 2-0 in his match against Columbia first-year Christopher Walker before coming back two touches to tie the bout. His opponent secured another touch, but Cai was able to storm back and secure a 5-3 victory for Harvard. First-year sabre Mitchell Saron also was able to win a nailbiter against his Columbia opponent by a score of 5-4.

“Columbia was our first opponent, and we knew it was going to be a tough bout,” said Dolegiewicz. “We had to bring the intensity up to 100%. After we beat them, we were excited and knew we had a really good shot at winning the whole title.”

Dolegiewicz went on to clinch the outright Ivy League Championship title after defeating his Princeton opponent.

“It was a very special moment, especially to be able to do it in front of friends and family. You work so hard for moments like that, and when it actually happens, the feeling is so surreal,” said Dolegiewicz. “Having all of my teammates rush me afterwards was extremely special and something I will never forget.”

All of the bouts were five touch bouts, as opposed to the more conventional longer 15 touch bouts. The fencers had to be extremely focused; one subtle movement could be enough to decide these condensed bouts.

“I came in super nervous, but gave it my all in every bout,” said Wang. “To be honest, in these five touch bouts, you have to want it a lot more than your opponent because of the limited number of touches. Even when I was down, I told myself I can still beat my opponent.”

The women’s team defeated Cornell, Brown, and Yale, while falling to Princeton, Columbia, and Penn, the former two of which rank No. 1 and No. 2 in the nation. Though the women have not yet had as much success as they did last year, when they lost just six regular season matches before placing fourth at the NCAA Championships, the past week was an important response to a tough St. John’s Invitational, in which they lost all five bouts.

The men’s team extended its win streak to 10 after dominating its competition at the Beanpot, hosted by Boston College. They were able to win 25-2 over Brandeis, 23-4 over MIT, and 20-7 over Boston College. Five fencers went undefeated in all three matches. This is the men’s squad’s 12th straight Beanpot title.

The women’s team was also able to go a perfect 3-0 to claim its 13th straight Beanpot Title. They were able to win 19-8 over Brandeis, 22-5 over MIT, and 16-11 over Boston College. Four fencers posted 8-1 records, including first-year sabre Maria Theodore, Wang, sophomore foil Cynthia Liu, and junior epee Cindy Gao.

The women’s epee squad was also able to secure a 9-0 record against their Brandeis opponents, while their foil squad went undefeated against MIT.

“We tried to feed off all the good things we did at Ivies at Beanpot,” said Wang. “We’ve been training really hard since J-term and it really showed with this win at Beanpot.”

Harvard will look to build on its recent wins at the NCAA regionals next month on March 8th. A strong performance there would send them to the NCAA Championships, which will be held on March 19-22 in Detroit, Mich.