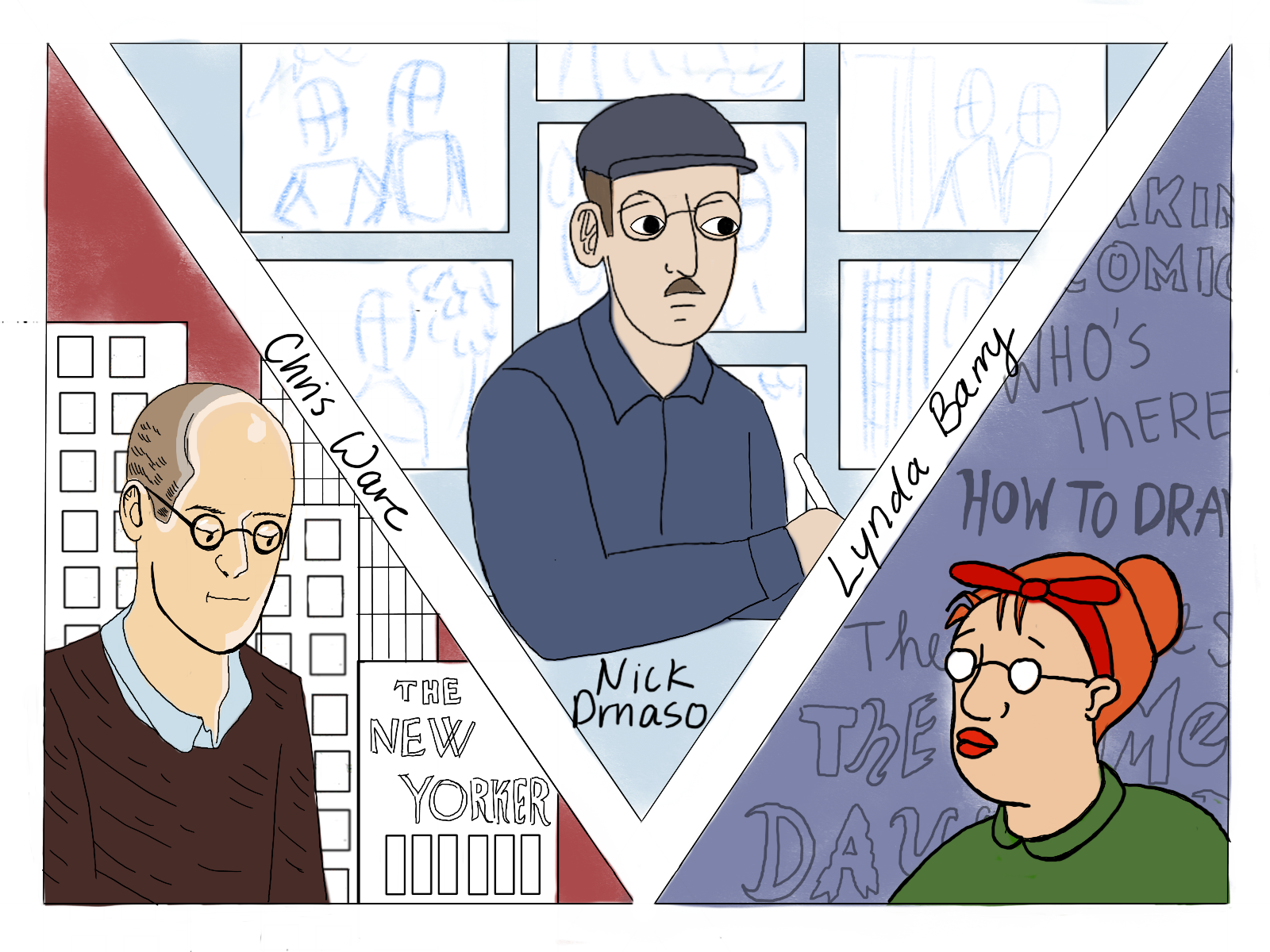 Comics are defined by rules: sequence, the presence of panels, cartoonish drawing. The comics that I like best are those that kaleidoscope the form — distorting it, playing with it, and breaking it.
By Olivia G. Oldham

I can’t draw a nose. The nostrils, the bridge, the tip, that thing below it called the philtrum — they’re never rendered believably, always disjointed and unimpressive. And yet, I know it’s a nose, and you, my reader, would categorize it as one too. It looks unlike yours or mine, yet it is certifiably nasal. Lynda Barry, comics legend and recent MacArthur Genius Grant-recipient, often cites the dispiriting experience of drawing a nose and realizing it doesn’t really resemble one. This moment arrives for most, she says, around the age of eight or nine. Soon after, you quit drawing and move onto things you’re good at: soccer, reading, or playing with mud.

But comics, Barry insists, are different than drawing. “You wouldn’t want Charlie Brown or Bart Simpson with a hyperrealistic nose and hands. I mean, that would be kind of a horror comic, right?” she said in an NPR interview earlier this year. In Barry’s most recent drawing exercise book, “Making Comics,” she requests that you fight those childhood urges and try to draw once again. Many of us learn to draw around the same time that we learn to write. According to Barry, as kids, we process our worlds through our own constructed language that connects the two forms — written and visual — into one. Comics, then, should come easy — you grew up fluent in their language. You might be out of practice; you may despise the shapes you etch. But still, she says, draw comics. Let them be bad.

A comic is time laid out on a page. Traditionally, each panel holds a moment: The scene moves from left to right, and a story unfolds sequentially. In superhero comics, like “Archie” or “Tin Tin,” frames fit neatly beside one another; dialogue is stationed at the top of the panel; action is denoted by onomatopoeia jumping off the page. In short, comics are defined by rules: sequence, the presence of panels, cartoonish drawing.

The comics that I like best are those that kaleidoscope the form — distorting it, playing with it, and breaking it.

Take “Here” by Richard McGuire. Every two-page spread of this “graphic novel” depicts different scenes from the same geographic coordinates, which, for most of the 20th century, are occupied by a living room. Instead of putting frames side by side in sequence, McGuire lays them on top of one another. As you flip through the pages, you travel through the history of the space. In one spread, the main frame shows the living room in 1915; a smaller frame placed on top of it shows a girl sprawled across the carpet in 1970; another still shows a cat in the corner in 1999, licking her paw. “Here” moves through eons — from the minutiae of a familial spat to apocalyptic climate devastation in the same spot, centuries later.

And yet “Here” can be read over the course of an hour. Comics are different from novels or movies in this way: Details don’t demand to be noticed. As in a conversation, a gesture — a flippant smile or light exhale — may hold an entire plot point. If you don’t look closely enough, you might miss it.

Reading comics, then, is serious business. Or not. In the inner cover of his first book, “Jimmy Corrigan: the Smartest Kid on Earth,” Chris Ware provides a guide to reading comics, complete with a short exam for review. The exam asks readers if they are male. If yes, the next question reads:

a. sort of happy.

e. miserable, ugly, and spit on.

This “exam” proceeds to ask if you read comics as a kid; if you identified with the superhero or the author; and if members of the opposite sex terrify you. Through this list of questions, Ware wryly paints the readers of his literary comics as nerdy straight guys who never attained the masculinity of their superhero-comic idols. He satirizes this dejected figure, particularly in his most recent book “Rusty Brown,” with a character named Chris Ware — an imagined version of his life, one in which he is a stoner art teacher at a midwestern high school. In the “Rusty Brown,” he pokes fun at “graphic novelists” who take themselves seriously, consider themselves highbrow, and yet just make comics — a historically “lowbrow” medium of pulp and fantasy.

The first comic book that I cared about fell between the two extremes: It was both pulpy and high art. “Ghost World,” the 1997 book by Daniel Clowes, tracks teen girl Enid Coleslaw and her best friend as they pursue (and sometimes torment) the weirdos of their boring suburban town. I loved how crass the girls were and how grotesque their neighbors looked. Clowes’s characters were misshapen and leering, as if he passed through the world with a magnified mirror that brought everyone’s pimples into focus. Reading, looking at “Ghost World,” I could see others as Clowes did.

The summer after my junior year of high school, I read a new kind of comic: “Building Stories” by Chris Ware. “Building Stories” might be categorized as just a book, but it isn’t — it’s a physical box. A box of pamphlets, papers, and posters, too heavy to carry in your backpack. Each object, meticulously composed by Ware, weaves together the stories of a one-legged woman, a bee named Branford, and a lonely building in Chicago.

The pages are laid out like maps, blueprints, and homages to “Peanuts” strips. No piece is meant to be read first, so I began with a massive newspaper-style work and laid it out on my bed. I leaned over it and in towards the tiny type; in my crouched position, I felt almost as though I was at work on the piece. Each day of that week, I woke up and sifted through the artifacts, scrutinizing them one-by-one. I waited with each frame for long moments, collecting bits of the story and constructing a chronology in my head. I was moved by the anxieties of an apartment building; I was peeved by a pretentious older boyfriend. While reading a wordless, silent strip about motherhood, I found myself weeping.

—Magazine writer Olivia G. Oldham can be reached at olivia.oldham@thecrimson.com. Follow her on Twitter @allpalaver. This is the first installment of her column on the serious subject of play, “Recess.”