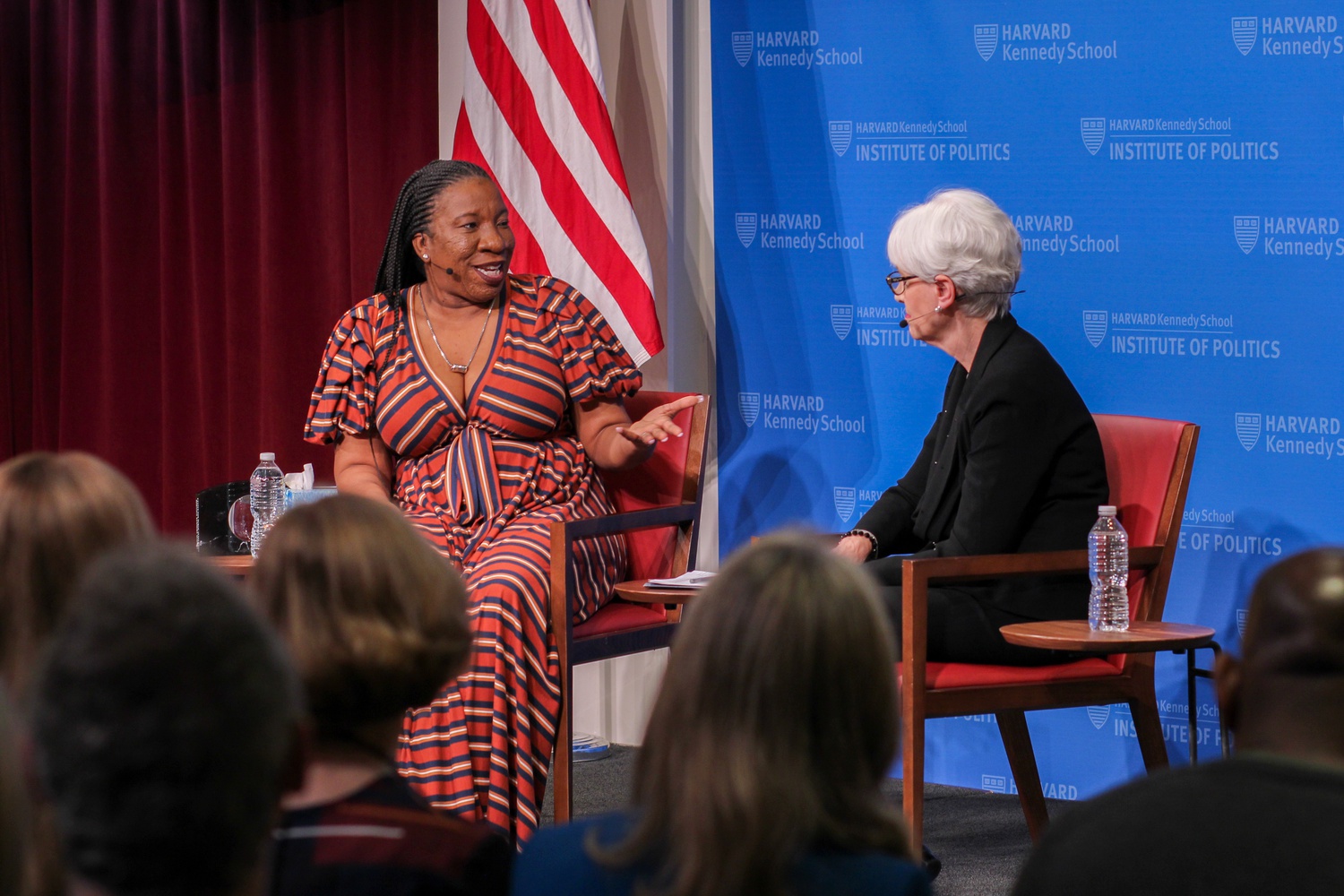 At the Institute of Politics Wednesday, Tarana Burke, the founder of the #MeToo movement, discussed the importance of intersectionality in her work and how she thinks the movement should continue after recent verdicts against Hollywood executive Harvey Weinstein.

At the beginning of the event, Burke received a standing ovation after being awarded the Harvard Kennedy School’s Alan Gleitsman Citizen Activist Award.

Ambassador Wendy R. Sherman, Kennedy School professor and director of the Center for Public Leadership, moderated both the conversation with Burke and a discussion with audience members.

During the discussion, Burke reflected on Weinstein, whose alleged sexual misconduct fueled the #MeToo movement in 2017. On Monday, a jury found Weinstein — a movie executive whom more than 100 women have accused of sexual harassment and abuse — guilty of a criminal sexual act in the first degree and third degree rape. He was acquitted of first degree rape and two counts of predatory sexual assault.

“There’s a lot of excitement in the air right now — some renewed energy after this Weinstein verdict, which I’m going to comment on, because we have a lot of work to do,” Burke said after receiving the award. “But I am really grateful for where we are.”

Burke founded the #MeToo movement in 2006, while working at Just Be Inc., her nonprofit that focuses on supporting young women of color. She coined the phrase “me too” as a statement supporting people who have experienced sexual assault.

In 2017, the New York Times broke a story documenting decades of allegations of sexual harassment against Weinstein. Soon after the story was published, actress Alyssa J. Milano began using the #MeToo hashtag. Hundreds of people began sharing their own stories of sexual misconduct using the hashtag.

That fall, Burke’s movement — over a decade old — suddenly emerged in the spotlight. At the discussion, Burke acknowledged that the Weinstein verdict “is not an indictment of #MeToo.” She said the movement “is about catharsis” and “healing.”

“Whether — white men, black men, black women — we have been socialized to respond to the vulnerability of white women,” Burke said. “And because of that, we put aside so many things, and we push forward.”

In the question portion of the forum, Lovern J. Gordon — founder of Love Life Now, a nonprofit to support people who have experienced domestic abuse — asked how to bring more people, including those from underrepresented backgrounds, into the #MeToo movement.

Burke stressed that providing resources to marginalized groups who may have felt disconnected from the mainstream #MeToo movement.

“Our work, our programs — and we’ve taken two years to really work hard to build out programs specifically so that we are hitting marginalized groups first, and so that we get to the people who usually don’t get the resources first,” Burke said.

Burke also encouraged students to get involved in procuring more resources at higher education institutions such as Harvard for people who faced sexual misconduct.

“When places like Harvard have courage they maybe haven’t had in the past, others follow,” Burke said. “You have the power now. You have the power in your pocketbook because you are paying tuition. Sit down and examine what forms of power you have, and use that power to push back.”

Maria Keselj ’23 said in an interview after the forum that it was “really insightful” to listen to the “empathy-based, survivor-based” perspective that Burke presented.

“We all have this urge to go and get justice,” she said. “But really, when you look back, is that what people really want? I find that it’s this really aggressive — and you can call it a toxic masculine — way to look at it.”

A previous version of this article incorrectly stated that a jury charged Harvey Weinstein on two counts. In fact, the jury found him guilty of those two counts.