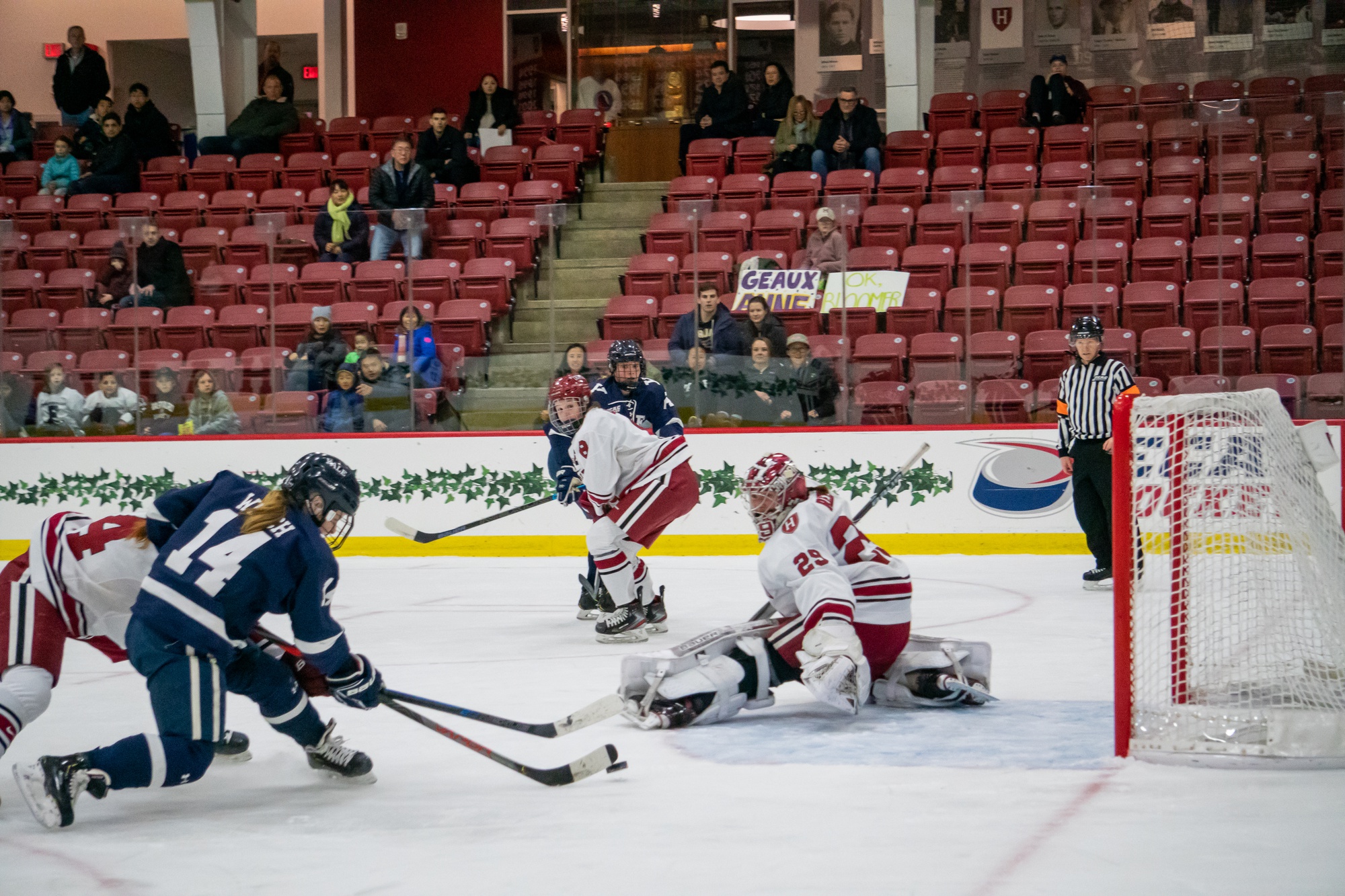 In the overtime session, Harvard funneled many chances to the net. The Crimson forced Yale junior goaltender Gianna Meloni to make a couple of semi-breakaway saves, outshot the Bulldogs 7-3, and earned a power play as well. Nonetheless, Yale (17-14-0, 13-9-0 ECAC) withstood the pressure and found a game-winning goal from junior forward Tess Dettling on a backdoor feed from sophomore forward Claire Dalton. A decisive game three awaits after the Bulldog 4-3 victory.

The drama at the finish matched the back-and-forth of a game in which neither team ever took a two-goal lead. In the first period, Harvard (17-13-1, 15-6-1 ECAC) would jump out to a 1-0 start just as it did yesterday. After drawing a penalty for checking, the Crimson power play went to work, but in a somewhat unconventional way. The Harvard defense allowed a relatively high-percentage high-slot scoring chance, but sophomore goalie Lindsay Reed positioned herself squarely for the save. The long rebound off of Reed’s stick would then act as a breakout pass, initiating the counter-attack. Co-captain and forward Kat Hughes carried the puck as a four-on-one developed. She then found a streaking Becca Gilmore for the backdoor finish just 3:23 into the first period.

Despite the quick start for Harvard, the mid-first period would mark a major momentum change. The Bulldogs found the net twice in just over a minute, 9:36 and 10:53 into the first frame, respectively. The first Bulldog goal, however, would not come without controversy. As junior defender Greta Skarzynski launched a knuckling point blast, the puck wafted through the air and looked to be heading towards the top-shelf. At the last second, however, sophomore forward Charlotte Welch managed to deflect the puck downwards and into the net. Immediately after the puck went in, Reed appealed to the referee—the puck looked as though it could have been batted down with Welch’s hand. The referees did indeed spend a long video review on the goal but confirmed—or at least could not overturn—that the deflection had been legal.

With the game tied, the Bulldogs—and Welch in particular—would parlay the first goal into further momentum. Just 1:17 later, Dalton found space in the Harvard defense and dished to Welch. Welch would make no mistake and delivered the puck into the open net, putting the Bulldogs ahead 2-1.

After heading to the locker room for intermission, however, the Crimson did not waste much time in evening the scoreline. Driving hard to the net, sophomore forward Dominique Petrie narrowly missed a wrap-around attempt. Nonetheless, the puck bounced off of the side of the net and into the prime scoring area in the slot. Meloni was somewhat out of position after defending the wrap-around, and sophomore defender Maryna Macdonald took advantage for Harvard, ripping a slapshot into the open net before Meloni could recover. The Crimson would outshoot the Bulldogs 17-2 in the middle frame, and the sustained pressure paid off at the end of the period just as it had at the beginning. On a four-on-four, at the 17:06 mark of the second period, Kat Hughes would rifle a pass through the Yale defense from behind the net to find cutting sophomore forward Anne Bloomer. Bloomer banged the pass into the far-side of the net on the clean passing play for a 3-2 lead.

With their season on the line in the third period, the Bulldogs started the final frame as the Crimson did the second—quickly. Just 2:32 into the last stanza, a familiar figure struck for Yale: Charlotte Welch. With the puck loose in front of Reed, Welch gained inside position to collect and deposit it into the back of the net, earning her the hat trick. Welch’s third goal would be her last, and the last for either team for the rest of regulation. Welch did stay active in the overtime, however, contributing the secondary assist on the Dettling goal. Dalton’s primary assists on the overtime winner would be her third, giving Yale another “hat trick” of sorts.

Along with the back-and-forth nature of the contest, perhaps one of the most notable game trends was the chippiness. The teams skated four-on-four five times, and Yale’s junior defender Lauren Moriyama took a five-minute major with a 10-minute misconduct. Despite the five minutes in the box, Harvard only took advantage of one minute’s worth of power play. The Crimson took two different minor penalties of its own during the five-minute span, almost entirely negating the advantage. All in all, the teams combined for 15 total penalties worth 41 minutes (27 to Yale and 14 to Harvard).

Beyond the scoring and special teams, Yale also relied on the play of Meloni. As mentioned, she made several critical saves in overtime that preserved not only the game for the Bulldogs but their season as well. Midway through the third period, Meloni also contributed a sliding backdoor save that could have easily been the go-ahead goal for Harvard. By the end of the game, Meloni had registered 43 saves, including 30-plus consecutive saves to end the game after the Crimson had knotted it at two in the early second period.

Everything comes down to tomorrow’s game three. Obviously, the game is a winner-take-all for the series, but beyond that, it is a chance to continue towards an ECAC Championship. Moreover, the winner will keep NCAA Tournament hopes alive while the loser will be almost certainly eliminated. The puck drops at 2:00 p.m. at Bright-Landry Hockey Center.