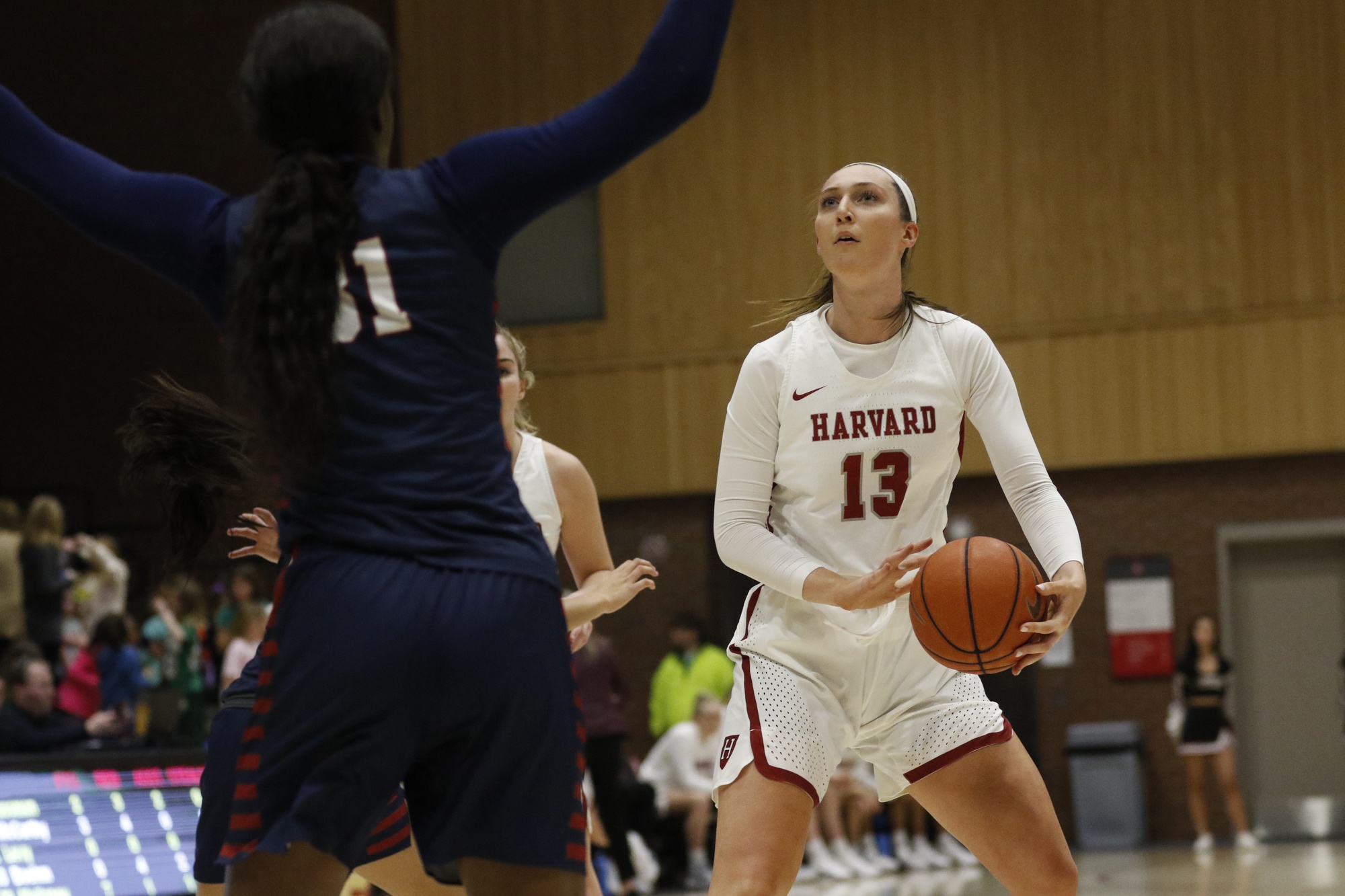 Harvard senior Jeannie Boehm co-led the Crimson in scoring with 10 points during a 60-46 loss to Princeton on Saturday. By Timothy R. O'Meara
By Ema R. Schumer, Crimson Staff Writer

In back-to-back games this weekend, Harvard women’s basketball hosted the two most dominant teams in recent Ivy League history. Since 2010, Princeton and Penn have traded places for first and second place in the league. Though Harvard (11-6; 2-2 Ivy) has not had its share at the title since 2008 – when it tied with Cornell and Dartmouth — the Crimson bested Penn (10-5; 0-2 Ivy) on Friday evening. The following night, Harvard fell to back-to-back defending Ancient Eight champion Princeton (15-1; 3-0 Ivy).

Despite staking out an early 5-0 lead, Harvard could not keep up with Princeton’s marquee players for long.

Princeton came out in a high-pressure woman-to-woman defense, which stifled Harvard’s motion offense. On numerous occasions, Princeton prevented the Crimson from finding opportunities to score, and Harvard was forced to take rushed, last second shots to beat the clock.

“I think that the scout on us is get in our grill,” co-captain and junior forward Rachel Levy said. “I think it's gonna be something we're gonna have to continue to work on...But I think that that's fixable.”

Though Harvard experienced trouble running its offense, the team scored seven consecutive points towards the end of the first frame to cut Princeton’s lead to single digits. Levy called this offensive surge a “crossroads” for the team.

“Our biggest goal is never separate as a team and I think that was a crossroads for us,” she said. “Either they're going to push the lead or we're gonna climb our way back. And we came together and put our heads down and we pushed forward and were able to close that lead, which gave us a lot of gas going in the second half.”

Despite this encouraging run, Princeton senior forward and reigning Ivy Tournament Most Outstanding Performer Bella Alarie responded with a deep three from behind the top of the key to bring her team’s lead back to double digits. Harvard held Alarie, who stands at 6-foot-4 and is being courted by WNBA teams, to 13 points on Saturday night.

Sophomore guard Maggie McCarthy was the lifeblood of Harvard’s effort against Princeton. Leading her team at point guard, McCarthy dished out five assists and shot an efficient three-for-four from behind the arc. Clocking in forty minutes of gametime action, she only conceded two turnovers.

“Maggie McCarthy is my hero,” coach Kathy Delaney-Smith said after Saturday night’s game, in which McCarthy played the entire game after resting for only seven minutes against Penn the night before. “That kid’s got a tough as nails heart.”

In addition to McCarthy, freshman guard Lola Mullaney and senior forward Jeannie Boehm provided needed points to Harvard’s insipid offense. They co-led Harvard in scoring, contributing 10 points each. Both players had inefficient performances, though. Mullaney shot three of ten from downtown, and Boehm went 5 for 14 from the field.

Harvard’s ability to put the ball in the hoop was certainly hindered by the absence of co-captain and senior guard Mackenzie Barta, who went down early in the second quarter after colliding with an opponent. Barta had to be carried off the hardwood by her teammates and did not return for the remainder of the game. Her status is unclear.

In addition to putting the ball in the hoop, Harvard struggled to grab rebounds. Princeton’s starters stood at an average of roughly six feet tall, compared to Harvard’s first five, who average a height of five foot nine. Harvard was outrebounded by Princeton 38 to 23.

Friday evening’s game seemed personal for the Crimson, whose matchups against the Quakers last season were replete with victory, drama, and tragedy.

Harvard’s 29-point loss to Penn at the end of last season was “fresh” on Crimson players’ minds, according to Boehm. In such a way, the win “meant the world” to her and her teammates, she said.

Crimson players were visibly smiling throughout Friday night’s game. They dove on the ground for loose balls, pushed the ball ahead on fastbreaks, and shot with confidence from three-point range.

“I was definitely really excited for this game,” Mullaney, who scored 20 points for the third time in her nascent Ivy League career, said. “Last year they beat us by a lot and we were really ready for this game and it just felt good coming out and getting a lead really quickly.” She scored half of Harvard’s threes, shooting five for eight from behind the arc.

From the post, Boehm put on a dominant performance, recording her fourth double-double of the season. She finished with 16 rebounds and 10 points.

Harvard will continue Ivy League play at home next weekend. The Crimson will face Yale, who is undefeated in league play, at 5 p.m. on Friday. At 4 p.m. on Saturday, Harvard will take the floor at Lavietes Pavilion against Brown, who has yet to pull out a win in conference.