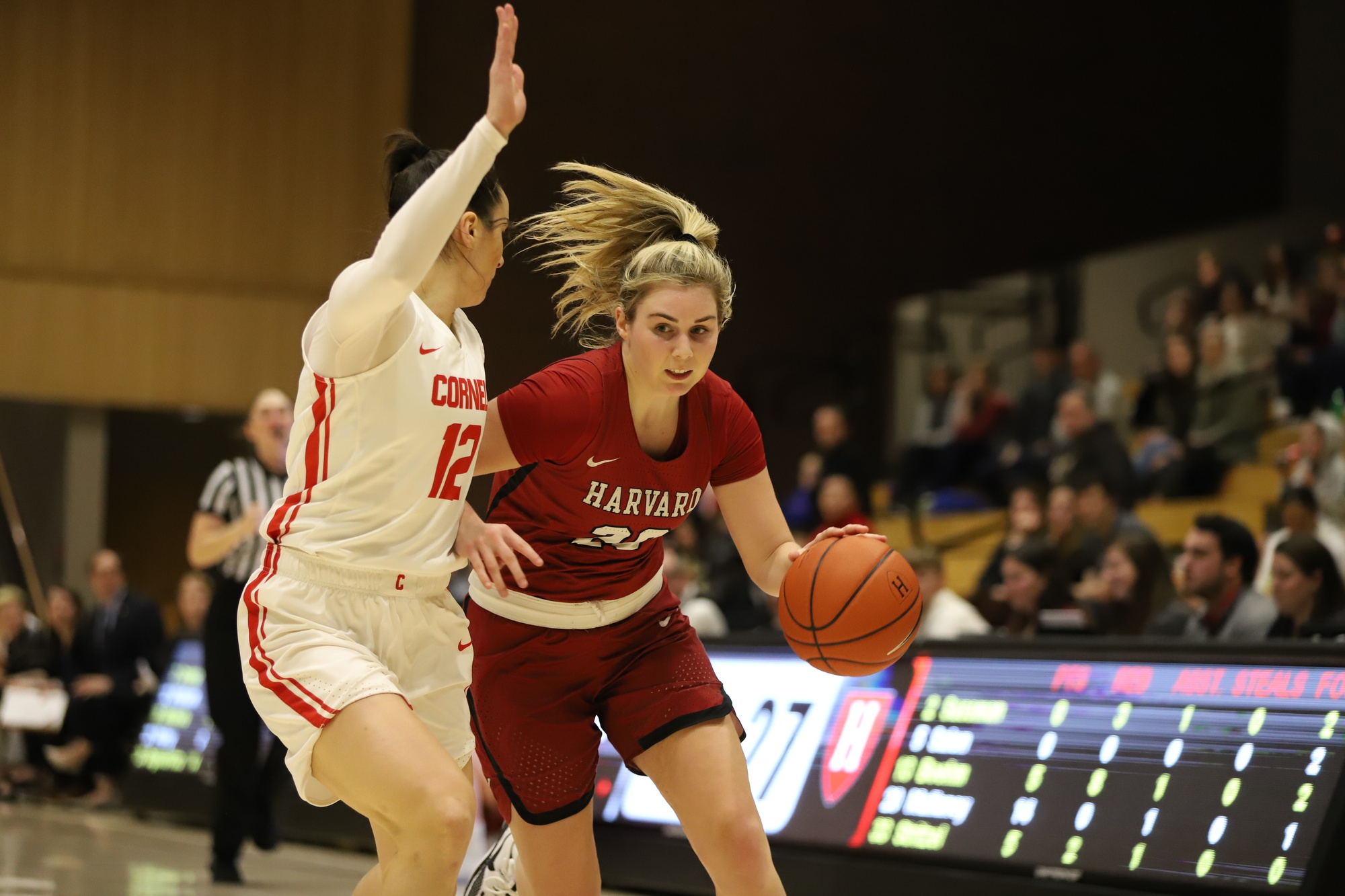 The Crimson fought until the last minute, but could not make up its deficit from a difficult first half. By Owen A. Berger
By Ema R. Schumer, Crimson Staff Writer

In its final home game of the season, Harvard suffered an upset 55-47 defeat to Cornell after losing a decisive game less than twenty four hours earlier.

As the game clock wound down, tears fell from the face of senior forward Jeannie Boehm, who finished with 12 rebounds and seven blocks before fouling out in what will most likely be her last game ever on the hardwood of Lavietes Pavilion. Sitting on the bench with a towel draped over her face, Boehm shared an emotional moment with Coach Kathy Delaney-Smith, who embraced her longtime player.

Also on the bench sat senior co-captain Mackenzie Barta, who sustained an injury in a game against Princeton at the start of the month that forced her collegiate career to an early finish.

Saturday’s loss was rife with significance not only for the two seniors but for the entire Harvard squad.

The defeat extends the Crimson’s losing streak to five games and all but surely excludes Harvard (14-11, 5-7 Ivy) from a berth in the Ivy League Tournament — the first time the Crimson will not qualify since the tournament began three years ago.

This season’s results signify a blip in Delaney-Smith’s illustrious Ivy League coaching career. On Saturday night, she tried coming to terms with the results of the game and of the season more broadly.

Still, Delaney-Smith said her players — many of whom assumed major roles on the team this season for the first time — should be proud of their accomplishments. Highlights of Harvard’s play this season include mounting a comeback against University of California, defeating Ivy League powerhouse Penn, and snapping Yale’s undefeated record.

“This whole season I think we overachieved,” she said. “We had no right doing what we did.”

Given these previous successes, Harvard’s loss on Saturday night was partially unexpected.

Entering the game, the Big Red (10-14, 3-9 Ivy) had only eked out two conference wins all season. The Crimson also had history on its side, having bested Cornell by 15 points only two weeks ago.

Harvard has not won a game since that contest.

The Crimson stepped onto the court Saturday evening still reeling from its devastating loss to Columbia just a day ago. That loss put into serious doubt Harvard’s prospects of competing in the Ivy League Tournament and made Saturday’s game all the more crucial.

From the start, the Big Red ran the Crimson off the court. Cornell attacked Harvard players on offense, repeatedly scoring uncontested breakaway layups. On defense, the Big Red came out in a full court press that forced the Crimson to rush. Though Harvard players had a bevy of opportunities to score, they could not convert on most of those plays. The Crimson amassed a 19-point deficit in the first ten minutes alone. 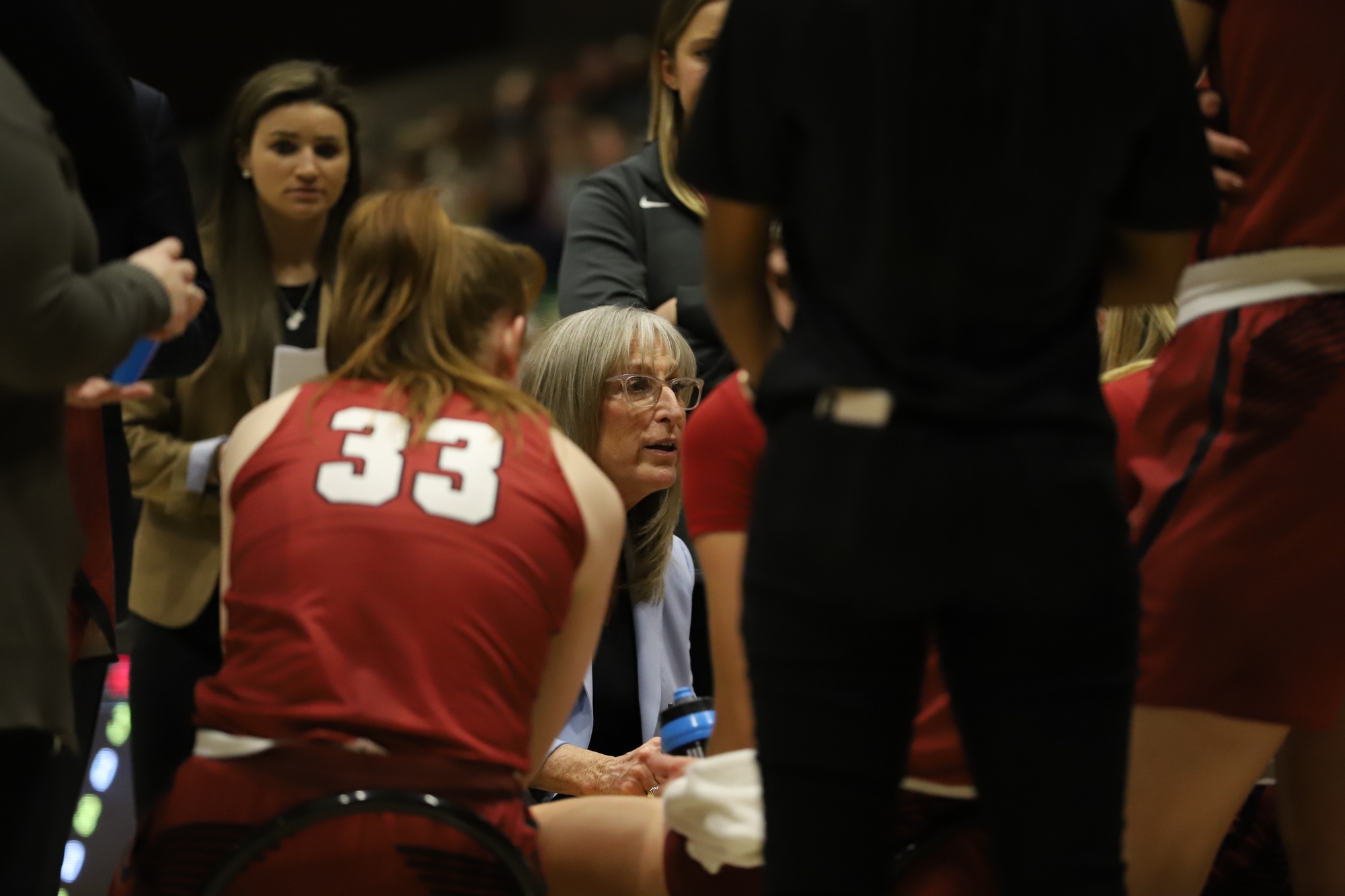 Harvard will likely miss out on an Ivy Tournament berth for the first time since its inception three years ago. By Owen A. Berger

Though Harvard’s loss symbolized the looming conclusion to its season, aspects of the Crimson’s Saturday performance also foreshadow a successful future for the young team.

“It was phenomenal. I thought it was gritty and tough,” she said. “And, you know, ‘nobody can stop me’ kind of mentality.”

Mullaney complemented Stritzel’s play, notching five three pointers in the game herself despite a slow start.

With two minutes remaining, Harvard trailed by 10 points. Still, Boehm gathered her teammates into a huddle. Though by that point the Crimson’s forthcoming defeat seemed inevitable, in this moment — as in many others — the team came together.

“I've never met more girls who will put everything on the line and sacrifice everything for each other,” she said. “I think this team, it's just part of our culture. That's just who we are.”

“And I feel that every time we step on the court together. We win together, we lose together.”

With just over a minute to play, Harvard, still trailing by 10 points, presented a full court press. Stritzel intercepted a desperate Cornell pass, grabbed a long offensive rebound off of a teammate’s missed shot, and shot and sunk a triple. Cornell coughed up the ball on the ensuing play and Stritzel wasted little time. She quickly knocked down another three — this time from NBA range — bringing the game within four points and sending the Harvard crowd to its feet.