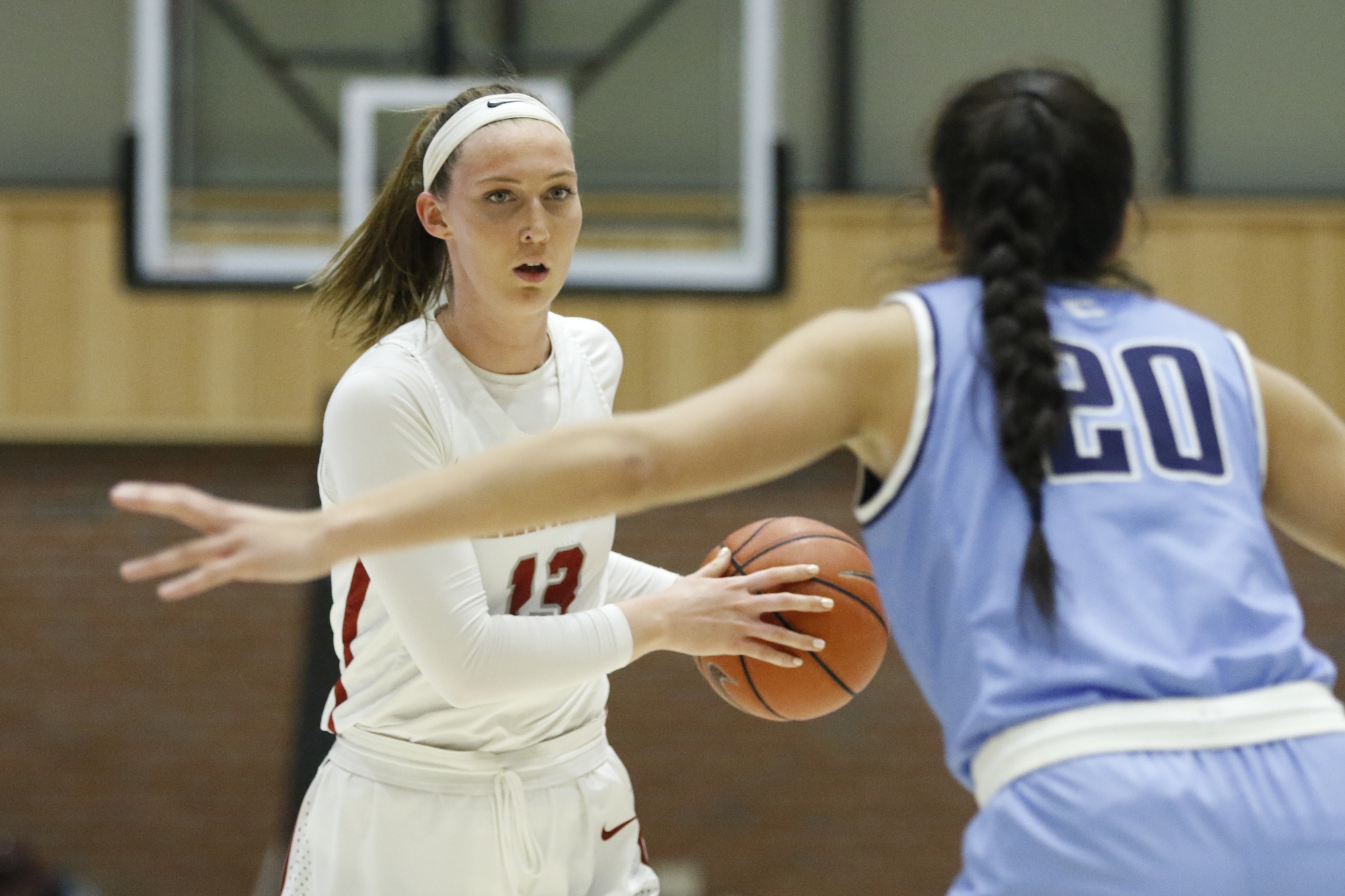 Jeannie Boehm will graduate with a degree in Economics in May. By Timothy R. O'Meara
By Ema R. Schumer, Crimson Staff Writer

Both starters, Boehm and Mullaney led the Crimson to defy expectations that presumed the team would succumb to inexperience after losing three of its top four scorers the previous season. Boehm recorded five double doubles this season, while Mullaney notched 81 three pointers.

Despite decisive victories over Cal, Penn, and Yale, Harvard stumbled in the latter half of conference play and finished in fifth place in the conference. That finish prevented the Crimson from securing a spot in the postseason Ivy League Tournament, which did not take place as a result of the coronavirus.

Though a fifth place finish is rare for Coach Kathy Delaney-Smith, she said she is proud of Boehm and Mullaney for their dedication and selfless play.

“I'm thrilled that Lola and Jeannie were both awarded All-Ivy honors,” she said.

Boehm said the award took on additional meaning to her during a time of confusion.

“We didn't make the Ivy League tournament, which was incredibly disappointing. And then March Madness was canceled altogether,” she said. “It felt really good in the midst of all the craziness. I was super honored to be on that list.”

Over the course of her career, Boehm worked her way to the top of several Crimson leaderboards. She was the second Harvard player in program history to block 244 shots and the fourth to grab 879 rebounds. The Winnetka, Il. native and McDonald All-American also notched 997 points in her 116 career games, all but one in which she started.

This season, Boehm’s experience steadied the otherwise young team. She averaged 9.7 points and 9.1 rebounds per game, nearly a double-double. Boehm grabbed 16 rebounds and scored 10 points in Harvard’s decisive home victory against rival Penn. In her last game sporting a Crimson jersey, she finished with 19 points and 15 rebounds.

Boehm said the highlight of her Harvard basketball career is the relationships she made with her teammates.

“College basketball — it's a really tough thing. It's a really long season, it's a lot of hours, you're there over winter break, you're there most times over spring break,” she said. “And so I think going through that grind and those tough times with other people, and then having this common goal and winning games and accomplishing goals together, I think that was definitely one of my favorite parts of college basketball.”

Though dozens of games and thousands of plays made up her career, Boehm reflected on one moment she shared with Delaney-Smith, who comforted her from the bench after she fouled out of the last home game of her career.

“What I was feeling in that moment is, ‘wow, we've been through a lot together.’ And I wouldn't have had it any other way and really do feel so lucky to have gotten to play under Kathy Delaney Smith,” she said. “We have and will have such a special relationship. I think I've grown so much as a result of her as a coach and as a mentor.”

Boehm, who concentrates in Economics, will work in marketing at L'Oréal in New York City upon graduation.

In her rookie season, Mullaney scored 377 points and became the second player in program history to record more than 80 three-pointers in a season. The Colts Neck, N.J. native evinced confidence from the first game of her college career, in which she shot 15 threes and scored 25 points.

Though she decisively contributed to the Crimson from her first game, Mullaney said the transition to college basketball was significant.

“I didn't really know what to expect, especially coming in as a freshman, getting a lot of playing time. It was so much different than playing in high school,” she said. “Definitely the speed and athleticism had to catch up to me.” 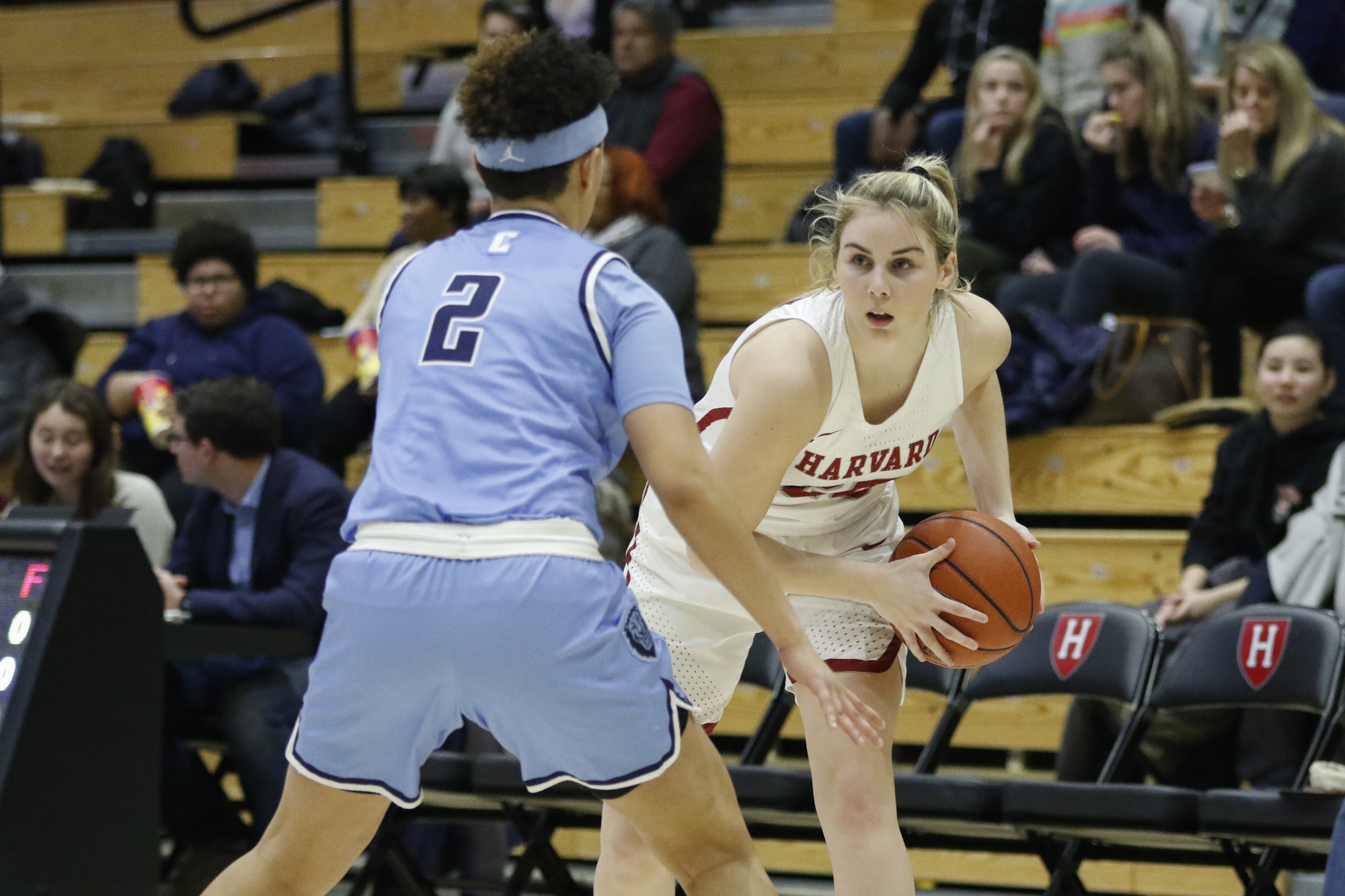 Lola Mullaney led the team this in numerous offensive categories, including points per game and made triples. By Timothy R. O'Meara

And yet, Mullaney led her older teammates by example this season. Against Yale, she scored 12 points in the third quarter to add fuel to the Crimson’s second-half surge. In Harvard’s win against Penn, she notched 20 points off of five for eight shooting from behind the arc.

Mullaney said she was thankful that the Ivy League recognized her with an honorable mention.

“It was an honor to get that award, especially being a freshman,” Mullaney said. “I was just really thankful to be recognized in that way.”

“Individually I think just work on my game and whenever the time comes and we can go back to school and start playing again, just to improve upon myself each season,” she said. “This was a really young team and a rebuilding year so I think next year we even have some more parts that can contribute. And that we’ll be a really strong team coming in next year.”