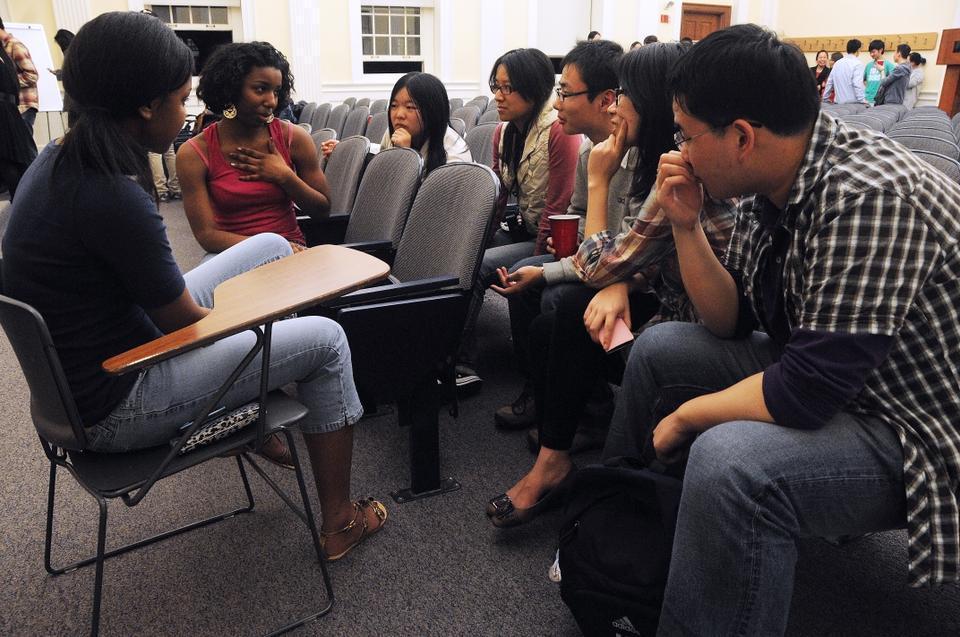 The Harvard College Association for U.S.-China Relations hosts events both in China and at Harvard for Chinese high school students. By Judy Park
Advertisement
Advertisement

Applying to Harvard, One Conference at a Time

In typical years, the conference seeks to export “the Western liberal arts education style at Harvard” to China through its eclectic speaker series and seminars. Though the program prides itself on its range, seminar leaders must ensure that their curriculums do not clash with the stances of the Chinese government on controversial issues. And while the presidents reject the idea that admission to HSYLC improves one’s odds of admission to Harvard, some applicants believe the brief affiliation with its undergraduates will bring them closer to their goal.
By Saima S. Iqbal

For an hour, members of the Harvard College Association for U.S.-China Relations conducted business as usual, clicking through slides of beaming highschoolers and fluorescent city skylines at a March 3 information session promoting the organization’s Harvard Summit for Young Leaders in China.

Then, a question stopped the presenters in their tracks.

Was any of this still possible, a student in the audience asked, given the outbreak of COVID-19 in China?

Each summer, HSYLC sends 100 a hundred Harvard undergraduates to Beijing, Shanghai, and Hangzhou to lead classes and activities for more than 1000 Chinese students. Well-established in China, HSYLC received $73,000 in revenue in 2017 alone; HWeek, an associated program that brings its top students to Harvard for a week, racked up an additional $133,000. Chinese students pay $1,500 to attend the nine-day program, though some receive financial aid.

At the time of the presentation, both the U.S. government and Harvard University had discouraged short-term travel to mainland China. HAUSCR presidents Vivian Y. Zhou ’20 and Caleb A. Ren ’21 hoped that travel restrictions would ease by August.

Now, as the pandemic spreads across the United States, the HAUSCR website cautions seminar leaders against booking flights until “certain that HSYLC will proceed.” According to Zhou and Ren, HAUSCR does not have an internal deadline for cancellation.

In typical years, the conference seeks to export “the Western liberal arts education style at Harvard” to China through its eclectic speaker series and seminars. Though the program prides itself on its range, seminar leaders must ensure that their curriculums do not clash with the stances of the Chinese government on controversial issues. And while the presidents reject the idea that admission to HSYLC improves one’s odds of admission to Harvard, some applicants believe the brief affiliation with its undergraduates will bring them closer to their goal.

While teaching a course on museums, former seminar leader Ava M. Hampton ’21 recalls watching her students “transform” before her eyes. Within nine days, they began speaking up in class and became immersed in topics they once found boring, sometimes even submitting pages and pages of detailed exhibition sketches, she says.

Given the limits of free speech in China, some phrases and topics are necessarily off-limits, Hampton notes. HAUSCR leaders suggested she reframe a class on protests in museums as one on access and activism instead, she says. Zhou and Ren say they rarely intervene in curriculum, though, because seminar leaders are “usually very cognizant of sensitive topics.”

For Yuxuan Shen, a current high school junior, the seminars she attended at HSYLC were a refreshing change from her lecture classes at school. It was her first time in a discussion-style seminar, and she found it “pretty fun talking [about] my feelings and ideas.”

While the Harvard name sparked some intrigue, Yuxuan was initially attracted to HSYLC as a place where she could “make a crazy number of friends” and “discover a new side of [herself].”

Hampton also emphasized the bonds seminar leaders can form with students. She still messages many of her former students on WeChat. Many ask about college life in America and, occasionally, about admission to Harvard.

She acknowledges that for every student like Yuxuan, there are some who view HSYLC as a “feeder program” for Harvard and other Ivy League institutions. Many hope the program reads well on their resumes. Others, Hampton explains, use the “taste of the liberal arts” HSYLC provides to flesh out application essays explaining their interest in American colleges, especially Harvard.

The program’s promotional materials hint at an immersive experience akin to attending Harvard. The website compares HSYLC workshops to Harvard’s freshman seminars and repeatedly claims that many alumni have matriculated at the College and other top institutions.

In addition to advertising its academic similarities with Harvard, the program also emulates the College’s residential system with “houses” of its own, including “Libertas” and “Virtus.”

Ruoshan Jiang, currently a junior in high school, puts it more bluntly: While she did enjoy the program, she says she paid $1,500 to attend the 2019 Summit largely to “help [her] college applications.”

Mainstream Chinese media outlets have only bolstered this impression. A recent People’s Daily article claims that the conference’s selection process is “similar to undergraduate student admission at Harvard University,” and underscores that “many [former attendees] were later admitted to prestigious universities including Harvard, Oxford, and Cambridge.”

Ruoshan chose to attend seminars on her likely college majors — economics and computer science — working hard so she might secure a recommendation from the program.

But her hopes quickly fell apart. Once she realized that the program does not issue recommendations for its students, she began treating HSYLC as a springboard for HWeek, an associated HAUSCR program that brings students to Harvard for a week. The $4,500 program gave her an “insider perspective” on the College and the opportunity to ask real-life Harvard students about her application.

Although Ruoshan notes that few students offered instructive advice, she remains hopeful that her links to Harvard will distinguish her from a crowd of applicants. She recently applied to the Harvard Summer School program with a letter of recommendation from Hampton.

“The harvard.edu email, it just might increase my chances,” she says, with some skepticism.

For now, it remains unclear if the conference will have any student attendees this year at all, dashing the hopes of students like Ruoshan.

Cancellation, however, may come with its own silver lining. According to Ren, the year after HAUSCR postponed the conference due to the H1N1 pandemic, HSYLC had to add a new site to accommodate the surge in interest.

— Magazine writer Saima S. Iqbal can be reached at saima.iqbal@thecrimson.com.