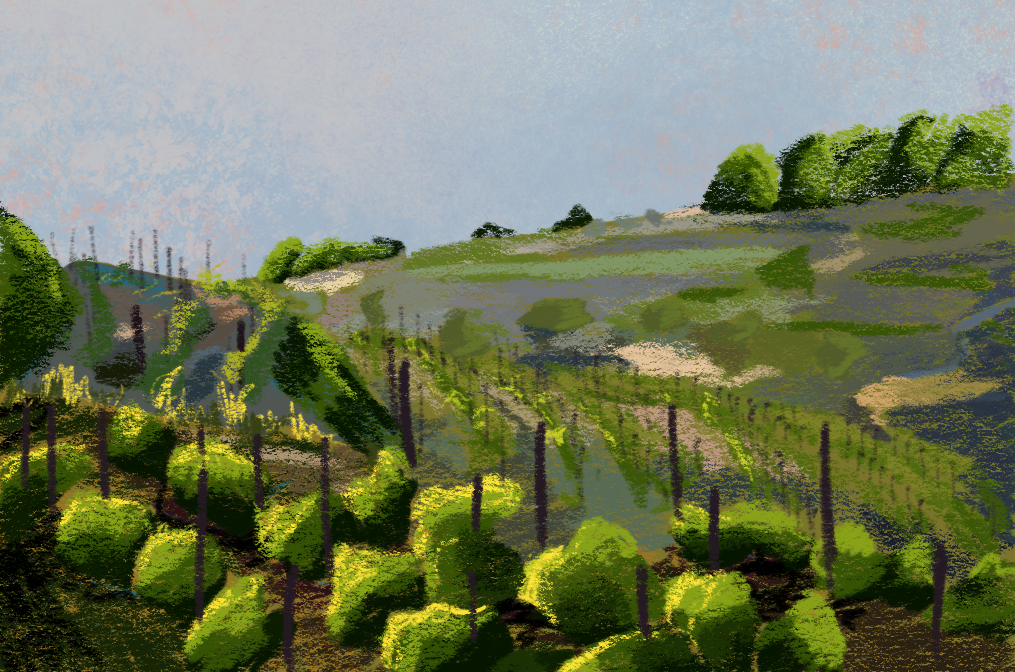 By the time an at-large terrorist was found hiding in Sant Sadurní, it felt like I had been there for months. A fact check reveals the actual time elapsed: one week.
By Amelia Roth-Dishy

It was a sticky June in New York, the city I was supposed to grow out of in two months, when I panicked and deferred my college admission. Instead of the extensive pro-con lists I usually make to combat my chronic indecisiveness, I had some angsty journaling and a single, abbreviated chart, and no plan — just an overwhelming sense that it wasn’t time yet. With 13 unplanned months stretching ahead of me, the fear of crafting a non-optimal gap year was paralyzing. Every option seemed insufficient — too close to home, too far, too voluntourist-y, didn’t pay enough. I spent the rest of the summer wallowing in a deep, indulgent, seemingly self-inflicted depression, terrified that the only impulsive decision I had ever made would also turn out to be the worst.

My reluctance to commit was slowly hardening into regret when someone finally intervened. A former teacher knew someone who knew someone who owned a vineyard in Spain. I spoke Spanish and was clearly miserable. Did I want to go and work the harvest?

I said yes and bought a plane ticket with only a hazy idea of what I had signed up for. I soon found myself under the late August sun in rural Catalonia, dirty beyond the help of a shower, wielding dull shears to wrestle bunches of grapes from thick, endless vines.

These were not just any grapes — I was deep in bubbly country. It was cava for breakfast and cava for dinner and sometimes cava for lunch in Sant Sadurní d’Anoia, a 7.3-square-mile town an hour outside of Barcelona that clings to grandeur as the undisputed cava capital of the world. Harvest time meant that the tiny town swelled with all the pickers that could be mustered. Most made the annual trip north from Andalucía in early August, and would return south, down to the Mediterranean, for the olive harvest in November. This, of course, was not my situation. I was a gringa from New York City, living in the unused flat of someone from the vineyard’s top brass.

After a lonely first few days, I managed to befriend some of the younger pickers from the extended Córdoban family with whom I worked the vines, and we made plans to cook tortilla española. My eighteenth birthday was coming up, and some of the technicians — the people with vinicultural degrees, who oversaw fermentation inside the bodega — were going to take me to the relatively cosmopolitan capital of the region, Vilafranca del Penedés, to celebrate. But I wasn’t sleeping well, still anxious that I had fallen into a series of imperfect choices.

By the time an at-large terrorist was found hiding in Sant Sadurní, it felt like I had been there for months. A fact check reveals the actual time elapsed: one week.

I read about the attack in the New York Times. On August 17, at least 13 people were killed and 80 gravely injured when a white van drove through Las Ramblas, Barcelona’s busy tourist thoroughfare. The Islamic State later claimed responsibility. It was the deadliest act of terrorism in Spain since the Madrid train bombings in 2004.

It wasn’t fear that rippled through Sant Sadurní; instead, it was sadness. We were only an hour outside Barcelona, but this slice of the Catalonian countryside wasn’t like Westchester, where everyone knew someone who lived in the city that they needed to call. This was a rural agricultural town in an archipelago of similar ones.

I explained this fact to the number of concerned people back home who saw the news and emailed me. Yes, I was in Catalonia, but I heard about it the same way you did. Yes, I am sure the country is in mourning, but the town, not quite. Or maybe I don’t know enough people yet to be able to tell. Regardless, my new daily rhythm carried on.

Four days later, my supervisor texted me: Go home and stay inside. I was headed back already; I had walked down into the town square to buy some eggs and jamón for dinner, but I found police vans and yellow ropes blocking the streets. Officers were unloading on the corner as I approached my first-floor flat.

I turned on the local news. It was in Catalán, a language I did not speak but was starting to understand. Van driver found in Sant Sadurni d’Anoia, Subirats district, the banner said. Police in pursuit. Suspect thought to be carrying explosives.

The man had been identified on the street by a local resident of Sant Sadurní, the reporter said. He looked suspicious, the witness told police, because he was wearing a long-sleeved shirt on a hot day.

After the police shot and killed the man, there was talk that he had been living in our town the whole time.

I remembered that the lock to my apartment sometimes stuck and put a kitchen chair in front of my door. With the perimeter secured, I sat cross-legged on the floor and waited, slowly learning the facts through the local news. No one from home was emailing me this time. Later coverage would mention that he was found in the Catalonian countryside, but failed to mention that he might have been down the street from my flat.

I could hear the police swarming the whole town outside. I heard a few gunshots, though they might have been in my head. Given the circumstances, I’d like to think I was relatively calm.

When I was little, my dad always reassured me that our best insurance against death by terrorism was the statistical unlikelihood that we would ever find ourselves anywhere remotely near a terrorist attack. The odds were indescribably infinitesimal, he would say, even living in New York City, in a post-9/11 world, where we’ve resigned ourselves to the easy mortality of crowded streets. That was his argument — something like a twisted but legitimate safety in numbers — and he stuck by it.

But of all the tiny towns in all the world, here I was, and so was the Barcelona van driver, both of us all alone. What was the statistical unlikelihood of that?

I decided to FaceTime my parents.

They picked up the phone wearing eclipse glasses, which were all the rage in 2017 leading up to the so-called “the Great American Eclipse.” The premise of the cheap square plastic lenses was that you could look directly at the momentous event without being blinded. My parents had donned them because the eclipse was about to happen.

It was very windy on their end. I explained that the van driver from the Barcelona terrorist attack was on the run in my 7.3 square mile town. They couldn’t hear me. They in turn explained that they were waiting for the eclipse, which I had deduced.

I explained again. I could tell they heard me this time because my mom took her eclipse glasses off. They told me not to panic and I said that I was not panicking and that I would keep them updated but that they should go watch the eclipse.

I don’t remember how our conversation resolved itself. The eclipse happened; the shelter-in-place lifted. One of the other pickers WhatsApped me asking if I wanted to come over to play cards. The mayor of Sant Sadurní issued a statement thanking the Catalán police force for their swift response and noted that her town had always been “a safe and peaceful place.”

It had been seven days in Spain. Another week passed; I started sleeping. The harvest season continued and I turned 18. I stayed in Sant Sadurní another month before coming home, once again without a plan. Optimizing the gap year no longer felt totally within my control.

“It’s been a strange few days, what with there being a terrorist on the loose and all and my missing of [unintelligible] coming in at an all time high. I am quite tired. Perhaps tomorrow I will write more, but I suppose we’ll see.

The days are, thankfully, starting to blur together.”