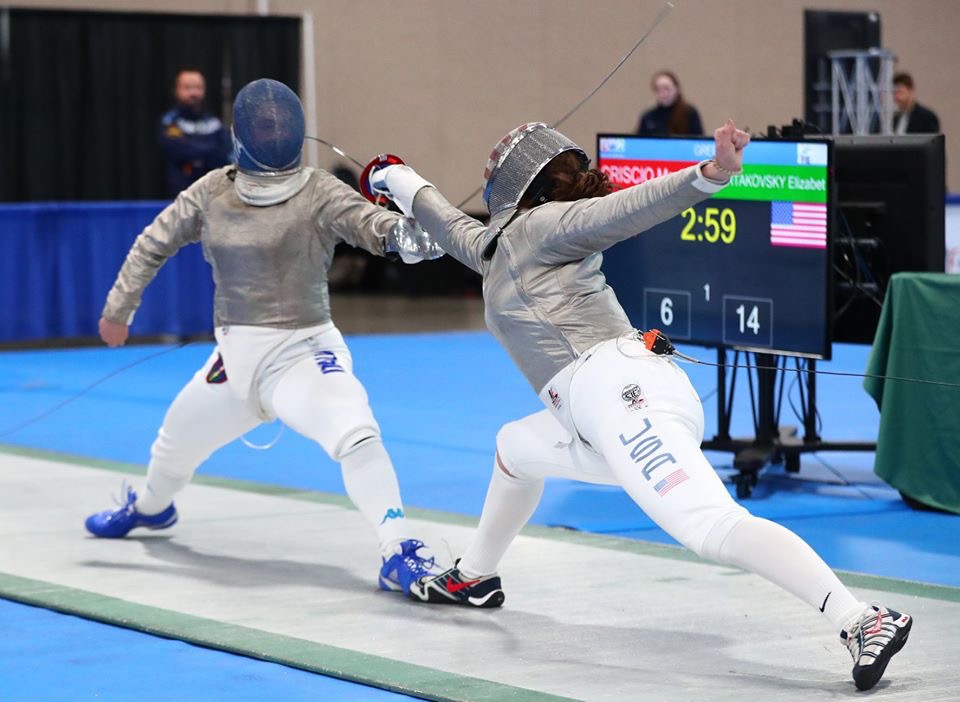 Tartakovsky avenged her previous loss to Criscio with a 15-6 win in Salt Lake City — the bout pictured — defeating the Italian Olympian. By Courtesy of Elizabeth Tartakovsky
By Ema R. Schumer, Crimson Staff Writer

On November 22, 2019, in Orléans, France, Harvard fencer Elizabeth Tartakovsky competed in her first world cup competition since deciding to withdraw from the College for the 2019-2020 academic year to qualify for the 2020 Summer Olympics.

After fencing successfully in the first round of the competition, Tartakovsky, 19, faced world cup gold medalist and Italian Olympian Martina Criscio, 26, in the second round. Tartakovsky fell to Criscio 15-11 and as a result was eliminated from the competition.

“It was a huge victory for me to beat such a high-level fencer and to overcome my fear of fencing this opponent that I had just lost to,” Tartakovsky said.

Though she won the bout on American turf, Tartakovsky attributed her victory to more than a possible home-court advantage.

“The beauty of that moment for me was that I was able to leverage my loss as a way to win my bout,” she said. “I was just surprised that I was so focused. I took away the pressures of doing well at the competition and instead just focused on what to do next.”

Tartakovsky pointed to that bout as the highlight of her eight-month-long journey vying for one of four female saber spots on the United States Olympic fencing team. Since August, she has traveled to Russia, Canada, Italy, France, and Greece to compete in world cup tournaments, which provided her with an opportunity to boost her aggregate score to qualify for the team. As of early March, Tartakovsky was ranked eighth in points in the U.S. standings and was one of only two fencers under 21 years old to score in the top 10.

The global coronavirus pandemic has disrupted Tartakovsky’s dream to compete in the Olympics, however. The three remaining tournaments that would have finalized the rankings were canceled, and on March 24, the International Olympic Committee delayed the Games by a year due to the public health crisis.

Tartakovsky said she believed she was going to qualify for the Olympics before the outbreak occurred. She said she thinks she could have clinched the decisive fourth spot in the rankings if she had placed in the top 32 at one of the three remaining competitions.

“Just based on my abilities, based on how much my coach believes in me, and the way I know when I fence my best, I really believe that I can beat anyone. So I did think I could make it,” she said. “As the competitions progressed, I was slowly learning how to deal with external pressures.”

Now that the Games are postponed, Tartakovsky has the chance to train for another year. Competing in a circuit that boasts veteran fencers in their 30s, Tartakovsky said gaining an extra year of experience would pay dividends. But at the same time, her sophomore year at Harvard awaits her.

‘I KIND OF LOST MY PURPOSE’

Just as it has for people all over the world, the coronavirus outbreak has altered Tartakovsky’s daily life and challenged her sense of purpose.

When she found out that no one would compete in Tokyo this summer, Tartakovsky said she felt lost.

“I kind of lost my purpose,” she said. “I used to wake up and the main event of my day was fencing and preparing to have a productive day, constantly working on something to move me a step closer to qualify for the Olympics and doing well at the Olympics,” she said.

Tartakovsky said she has structured her days for the past eight months around physical and mental preparation for the Olympics.

She said she would begin her day attending an early morning spin class at a nearby studio and end her day at fencing practice that went into the night. In between physical training, Tartakovsky said she honed her mental agility by meeting with a sports psychologist to simulate high-pressure situations and setting aside time daily to meditate, play piano, read, and brush up on her calculus.

Tartakovsky described those mental exercises as providing her not only with a respite from training on the mat, but also with a method to improve her fencing. She quoted one of her teammates who compares fencing an opponent to solving a math problem.

“It helps me clear my mind from just fencing, but also it just helps your mind stay sharp,” she said. “People call it physical chess because there’s a lot of tactics involved and a lot of thinking involved because you’re kind of playing against another brain.”

‘VERY LUCKY TO BE IN THE SITUATION I’M IN’

Tartakovsky is trying to maintain structure in her daily life amid the upheaval of COVID-19. She said she makes a list of goals for herself every day and that she still wakes up at around 8 a.m. Since the public health crisis has forced Tartakovsky’s fencing club in New York City to shutter, she said her coach has been conducting training sessions on Zoom that she logs onto from the basement of her house in Livingston, N.J. She practices against a makeshift opponent, which she created out of a boxing bag adorned with a white jacket and fencing mask.

In addition to virtual training sessions, Tartakovsky said she fills her days by going on runs outside, playing piano, taking an online math class, and reading. She said she and her teammates are currently reading ‘The Alchemist,’ a fitting tale that follows a boy searching for his purpose in life and chasing his dreams.

Though the coronavirus outbreak has postponed her dream, Tartakovsky said she feels fortunate.

“I’m spending a lot of time with my family. Everyone’s healthy for now and we have the right resources and everything to quarantine ourselves,” she said. “I know there are a lot of people that are struggling a lot more than us right now. And I think I’m still very, very lucky to be in the situation I’m in.” 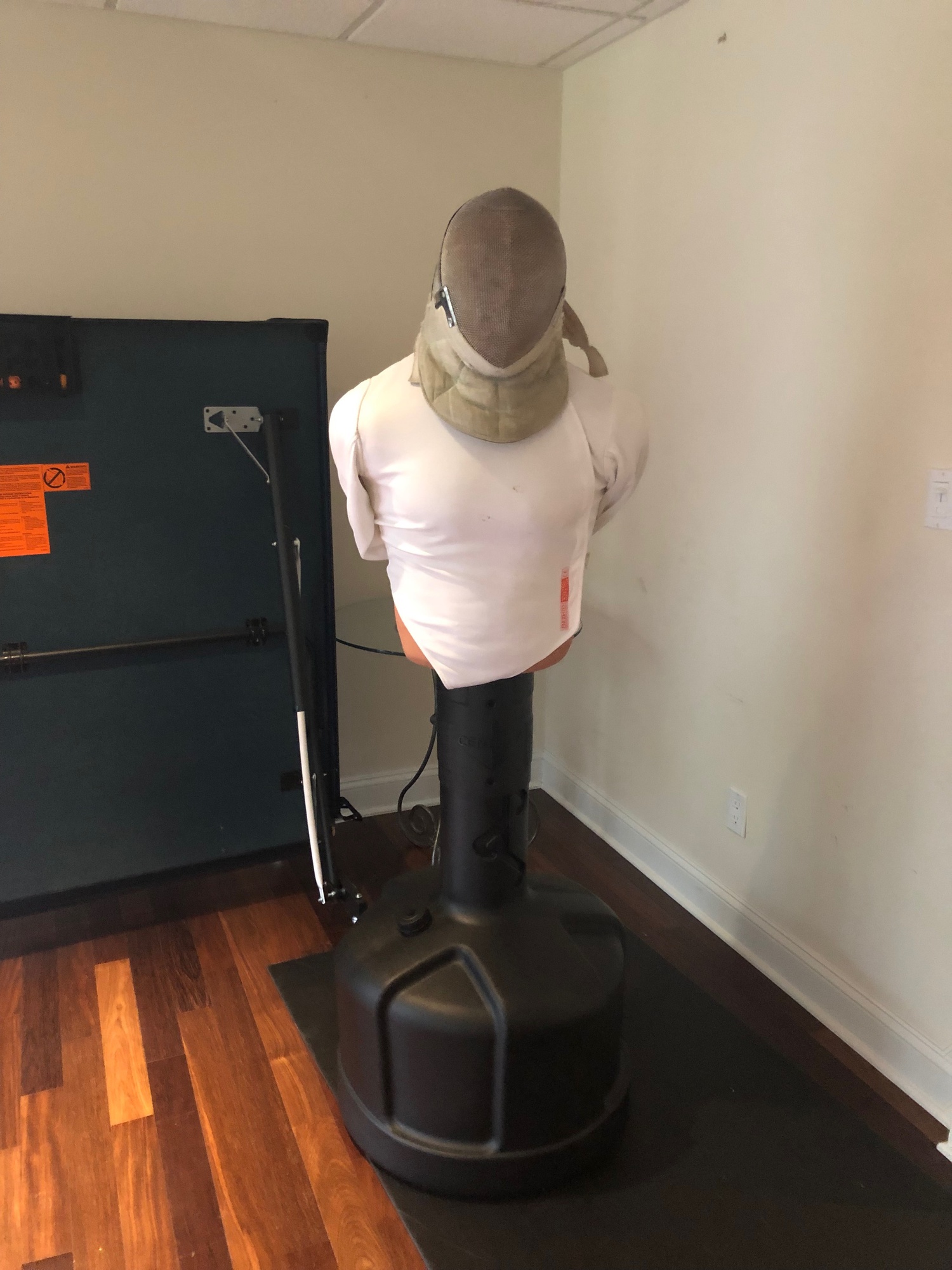 Due to the COVID-19 health crisis, Tartakovsky has had to get creative with her home training. By Courtesy of Elizabeth Tartakovsky

Soon, Tartakovsky will have to decide whether she wants to spend the following year at Harvard or training for the Olympics. When asked about her forthcoming decision, Tartakovsky let out a sigh.

“Ahh, it’s tough. I've honestly been avoiding thinking about it,” she admitted.

“I told myself going into this that — it’s scary to take a year off from school and to make such a big commitment — but I told myself, ‘it's only a year, my friends won't go anywhere, you know, whatever.’ So I never accounted for taking two years off.”

Tartakovsky said she misses college and has academic and professional goals that she would like to pursue at Harvard.

“I do really miss school. I miss my friends. I think I have a lot of academic and career goals too, not necessarily in a rush to start on them but you know there’s more to my life also than my fencing goals.”

Still, Tartakovsky said she worries that discontinuing her training will render her accomplishments this past year moot.

Tartakovsky said she is waiting for the International Olympic Committee and the International Fencing Federation to announce the official dates for the 2021 Olympics as well as the qualifying competitions. She said she plans to make her decision within the next month.

The three-time world cup medalist also noted that making decisions in high-pressure situations is not new to her.