As faculty head to the polls today for Super Tuesday alongside other Massachusetts voters, the first installment of The Crimson’s 2020 faculty survey series explores the political beliefs of Harvard professors in a highly contentious and consequential election year.
By James S. Bikales and Jasper G. Goodman 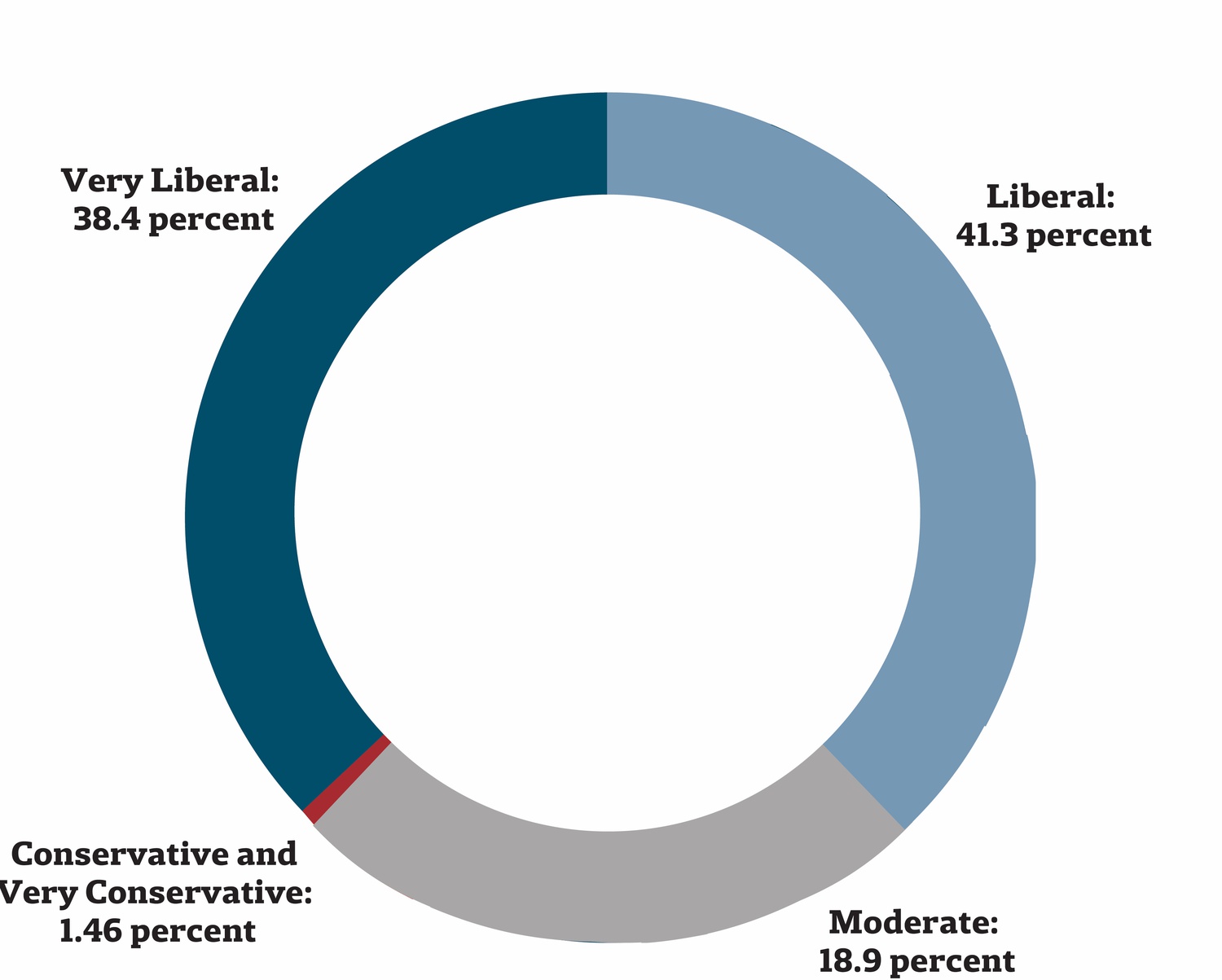 Hundreds of faculty reported their political leanings in a 2020 Crimson survey. By Camille G. Caldera

Harvard’s Faculty of Arts and Sciences strongly favor United States Senator Elizabeth Warren (D-Mass.) over other 2020 Democratic presidential hopefuls, according to a survey of FAS faculty conducted by The Crimson.

Forty-four percent of faculty members who took the survey said they back Warren, a former Harvard Law School professor. The tally is far higher than any other presidential hopeful. U.S. Sen. Bernie Sanders (I-Vt.) boasted the second-highest level of support among surveyed faculty at 20 percent.

A mere three of the 260 respondents said they support President Donald J. Trump in his re-election campaign.

The Crimson distributed its faculty survey to more than 1,000 members of the FAS in late February, polling Harvard’s flagship faculty on key University policy decisions, pressing issues on campus, and challenges they face as academics. Emeritus, tenured, tenure-track, and non-tenure-track faculty all received the survey.

The 74-question survey garnered nearly 500 responses, though not all respondents answered each question. The anonymous survey, a link to which was emailed to nearly every member of the FAS, was open from Feb. 20 to 27. The Crimson did not adjust the data for possible selection bias.

As faculty head to the polls today on Super Tuesday alongside other Massachusetts voters, the first installment of The Crimson’s 2020 faculty survey series explores the political beliefs of Harvard professors in a highly contentious and consequential election year.

Beyond the top-line results, The Crimson’s survey provided insight into the faculty’s political views along a variety of demographic lines.

According to the survey, Sanders is less popular among the top and bottom faculty income brackets. The longtime Vermont senator has support from just 9.7 percent of faculty members who earn north of $250,000 per year from the University. He holds the support of 9.1 percent of those who earn $40,000 per year or less from Harvard. He finds his strongest support among faculty members who earn between $41,000 and $65,000, with 37.8 percent of respondents in that income bracket expressing their support.

Warren and Sanders received strong support among surveyed faculty aged 25 to 35, at 41 percent and 35 percent, respectively. Fifty-one percent of respondents aged 36 to 45 favored Warren, while Sanders came in second in that age bracket at 21 percent. Support for the pair of progressives waned among faculty over 65, with Warren at 38 percent and Sanders at a mere 8 percent. Buttigieg, meanwhile, placed second among the oldest age bracket, receiving 19 percent of respondents’ support.

In addition to indicating support for Warren on The Crimson’s survey, FAS faculty also backed her with their wallets more than any other candidate in 2019, according to an analysis of Federal Elections Commission data conducted by The Crimson.

The Crimson cross-referenced all faculty members with FAS in their title in the Harvard Connections database with contributors who listed Harvard as their employer in 2019 FEC filings. According to that analysis, Warren received at least $19,666.59 from at least 28 Harvard faculty members. In 2019, Buttigieg — who dropped out of the Democratic race Sunday night — came in second with at least $7,091 in donations from FAS faculty.

An overwhelming majority of faculty members who took the survey broadly characterized their political leanings as “liberal” or “very liberal” — forty-one percent of faculty responded they are “liberal,” and 38 percent said they are “very liberal.” Just four professors identified themselves as “conservative” or “very conservative.”

A similar survey of the faculty in 2018 also found that the vast majority of respondents identified as “liberal” or “very liberal,” and a similarly large majority reported that they voted for Hillary Clinton in the 2016 presidential election.

Despite indicating in large numbers that they planned to vote for Warren, faculty survey respondents were divided over which Democratic candidate they believe is most electable. The plurality of respondents, 30 percent, ranked Sanders as the “most likely to beat candidate President Donald Trump” on a question which garnered 246 responses.

A combined 53 percent of faculty believed one of the candidates on the left wing of the ideological spectrum — either Sanders or Warren — would be most likely to win in the general election. Former New York City Mayor Michael R. Bloomberg, who will appear on Democratic primary ballots for the first time Tuesday, ranked third on electability among surveyed faculty at 17 percent, followed by Biden at 11 percent.

Nationally, Democratic primary voters say electability is one of the most important factors in selecting a nominee to face Trump in the general election. Just four major candidates — Warren, Sanders, Biden, and Bloomberg — remain in the Democratic race ahead of today’s pivotal Super Tuesday contests.

For its 2020 Faculty Survey, The Crimson collected electronic responses through Qualtrics, an online survey platform, from Feb. 20 to 27, 2020. A link to the anonymous survey was sent to 1,341 FAS and SEAS faculty members through emails sourced in October 2019 from Harvard directory information. The pool included individuals on Harvard’s Connections database with FAS titles, including emeritus, tenured, tenure-track, and non-tenure-track faculty.

Of those faculty, 476 accessed the link to the survey. A total of 416 participants answered at least one question, while 263 participants completed every question in the survey.

Of faculty who were sent the link to the survey, 127 — or 9 percent — are affiliated with SEAS. In comparison, of respondents who indicated their divisional affiliation on the survey, 7 percent reported an affiliation with SEAS.