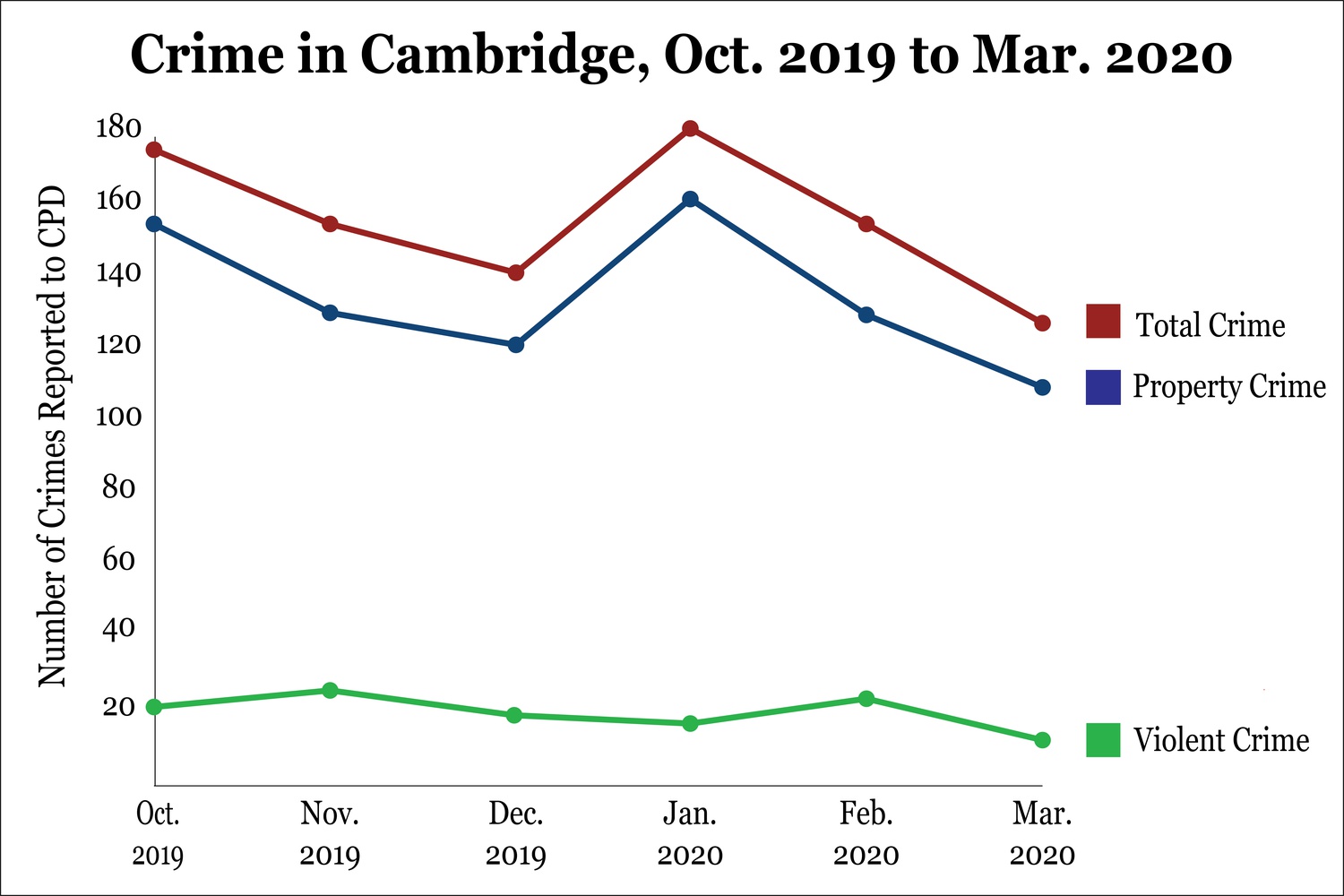 Cambridge saw a decrease in reported crimes, both from February and from March 2019. By Camille G. Caldera
By Ema R. Schumer and Charles Xu, Crimson Staff Writers

As government and public health officials implore people to stay home, serious crime in Cambridge declined 17 percent in March compared to the previous month, according to the Cambridge Police Department’s monthly crime report.

Last month’s decrease in crime more or less coincided with the outbreak of the novel coronavirus and a series of precautions taken to curb its spread. By late March, university campuses had largely closed and non-essential businesses had shuttered. Governor Charlie D. Baker ’79 announced a stay-at-home advisory, which took effect on March 24.

As of April 12, Cambridge reported 256 confirmed cases of COVID-19 in the city and one death from the disease.

Local police and courts have also shifted their operations in response to the crisis.

CPD moved many of its services over the phone and restructured officers’ work hours, while courts throughout Middlesex County transitioned to remote hearings for emergency matters and postponed hearings that were already underway. The Middlesex District Attorney’s office also oversaw the release of prisoners to reduce crowding.

While CPD’s crime report notes it is too early to determine how the public health crisis will affect crime in Cambridge, Middlesex District Attorney Marian T. Ryan said in a March 27 interview that she believes social distancing guidelines are responsible for a drop in crime throughout the county.

“Arrests and criminal activity are down,” Ryan had said. “People are not out and about in ways that just lead to lots of interactions that might go awry.”

As many Cambridge stores closed their doors, shoplifting plummeted by 46 percent with only 21 reports of theft in March compared to 39 in February. Person-to-person theft also reached its lowest yet in 2020, with only two cases in March.

Though CPD’s domestic violence unit has prepared for an increase in domestic assault incidents as a result of people staying in, CPD received nine reports of aggravated assault this past month — down 44 percent from 16 in February 2020.

Despite a decrease in overall crime, unattended bikes and packages left on doorsteps were frequent targets of theft. The number of bike thefts rose from 10 thefts in February to 22 in March — a trend that CPD spokesperson Jeremy Warnick explained is common when the weather gets warmer. Theft from residences increased 50 percent from 16 to 24 cases, which Warnick attributed to a rise in package thefts.