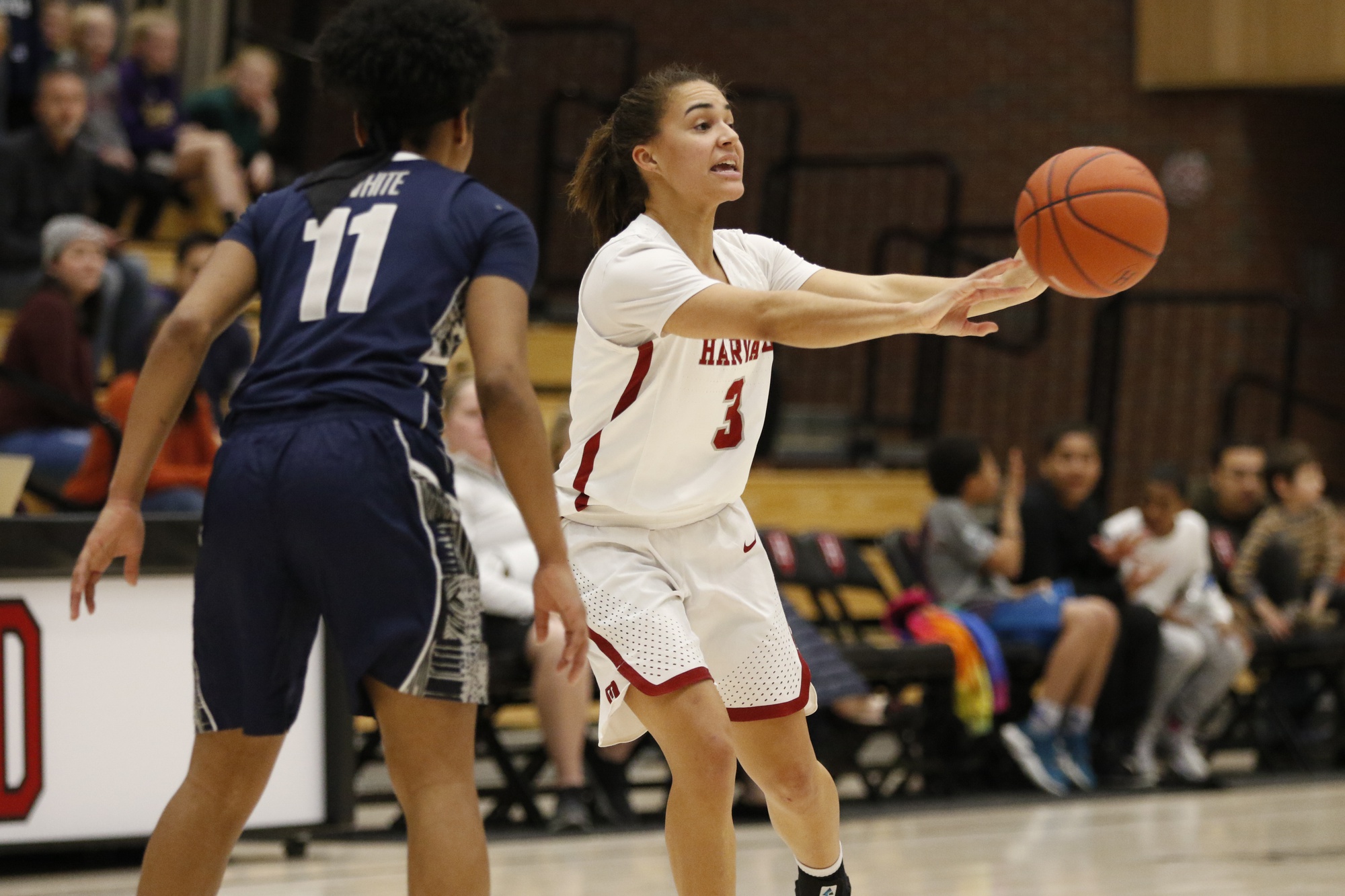 Benzan’s 13-point performance against Georgetown in the 2019 Women’s National Invitational Tournament would prove to be her last appearance in a Harvard uniform. By Timothy R. O'Meara
By Ema R. Schumer, Crimson Staff Writer

Benzan, who led Harvard in points and assists during her three seasons on the team, sat out her senior year for the Crimson to preserve a season of NCAA eligibility. In October, Benzan announced that she would suit up for the Texas Longhorns as a graduate transfer for the 2020-2021 academic year.

Since then, Benzan wrote in a message to The Crimson on Wednesday that she reconsidered her decision after learning at the beginning of the month that Texas would undergo a turnover in head coaches. Benzan added that she had previously been “extremely torn” between joining Texas or Maryland’s program.

Last week, Benzan called Maryland’s head coach Brenda Frese to tell her that she wanted to finish out her NCAA career in College Park, Md.

“Maryland has a competitive and winning culture and tradition. Starting with Coach Frese, the coaching staff and the players embody that love and passion for basketball,” Benzan wrote. “I am extremely excited to play for her and to be a part of the Maryland Terrapins women’s basketball program.”

Maryland, a member of the Big Ten conference, has a history of winning. The team has clinched a birth in the NCAA Tournament for the past ten consecutive years, and it is the defending conference champion.

Benzan will bring much-needed experience to the Terrapin program, though. The team saw three of its players enter the transfer portal this month and will likely not welcome back any returning full-time starters.

Frese told The Washington Post earlier this week that she expects Benzan to assume a leadership role on the team next season as both a scorer and facilitator.

“Katie is a proven winner and possesses all the leadership qualities you would want on your team,” Frese said. “She is extremely versatile in her skill set with her ability to knock down an open three and she can utilize her basketball IQ to make a play for her teammates, can rebound and get to the free-throw line.”

In just three seasons at Harvard, Benzan eclipsed the previous program record for three-pointers made, notching 287 shots from behind the arc for the Crimson. Harvard came in third place in the Ivy League during Benzan’s three seasons on the team, finishing behind Princeton and the University of Pennsylvania each season.

Benzan’s departure from the Crimson left the team without a traditional point guard this season. Though several players stepped up to try to fill the role, Harvard finished fifth in the Ivy League — its worst performance in the 21st century to date.

Benzan, who will graduate from Harvard in May with a degree in Psychology, wrote that she plans to pursue a graduate program in either criminal justice or clinical psychology at Maryland.

Basketball may take Benzan, a native of Cambridge, Mass., further than College Park. She wrote she is interested in playing professionally in the United States or overseas after she finishes up her season with the Terrapins.