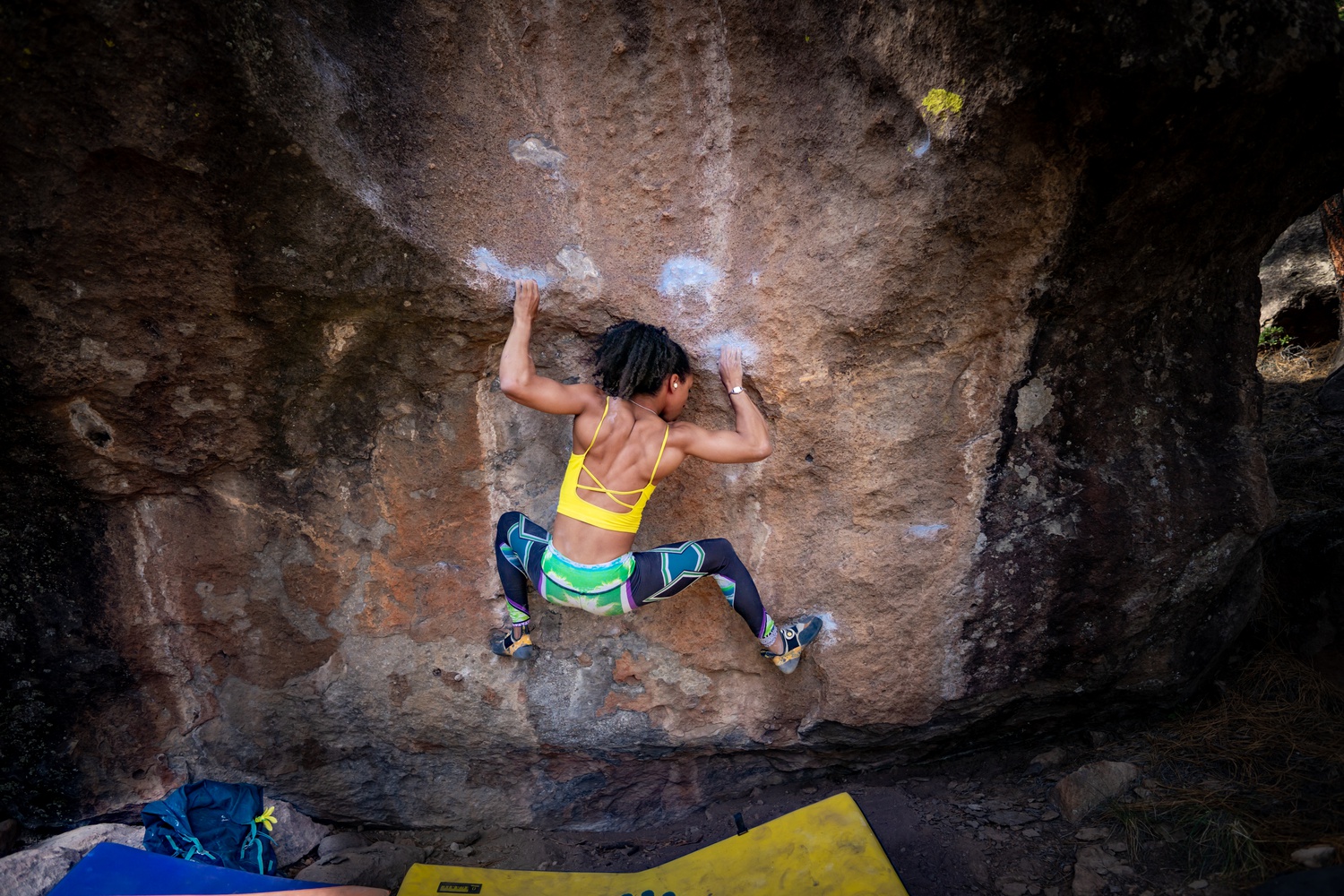 In bouldering — the variation of climbing Dubyk prefers — a climber does not have any support from ropes or harnesses. By Courtesy of Favia Dubyk
Advertisement
Advertisement

Following the Cairns to a More Inclusive Outdoors

From her first trip into the backcountry, Dubyk knows just how important having a guide can be: “If someone doesn't explain to you what that stack of rocks means, you could get lost out there.”
By Marka F. X. Ellertson and Harrison R. T. Ward

“I remember the first time I saw a cairn,” Favia C. Dubyk ’09 recalls. She remembers asking herself: “Why is there a stack of rocks out here in the woods?” Dubyk was in the backcountry, on her first hike with some friends she met at her climbing gym. One of her companions explained that what she was looking at was a cairn, which mark trails and keep hikers from getting lost. Today, Dubyk is another kind of guide to the wilderness, an advocate to make the outdoors more inclusive and accessible to all.

Dubyk wasn’t always interested in the outdoors. She was born in Durham, N.C., where she lived for seven years before moving to Nashville, Tenn. At the time, her mother was a graduate student at Vanderbilt University, and the two of them moved into on-campus family housing.

When her mother was unable to find a babysitter, she would take Dubyk with her to class and occasionally to her lab on the weekends. Growing up around the “brain neural labs of Vanderbilt,” Dubyk considered pursuing higher education to be “an assumed thing.”

In a high school science fair project, Dubyk found that the arsenic levels in her town’s drinking water exceeded EPA guidelines. This, combined with her childhood experiences in her mom’s lab, encouraged Dubyk to pursue a concentration in Environmental Science and Public Policy at Harvard.

Dubyk kept busy while at Harvard, a member of both the Black Students Association and Unite for Sight, an organization which helped conduct eye tests and distribute glasses to communities with barriers to accessing eyecare. But Harvard’s Track and Field team was her most significant extracurricular commitment.

Despite studying ESPP and setting a school record for the 100 meter sprint, Dubyk remembers that during college, she was far from a fan of the rugged outdoors. “You will not catch me outside. I like[d] being inside and air-conditioned,” she says. Her fondness for exploring the wilderness didn’t develop until graduate school, when she joined a climbing gym.

One day, another member of her gym approached her about joining an outdoor climbing trip. “What is this outside you speak of? But sure, take me there,” she recalls thinking.

Initially, she felt out of place climbing outdoors. Dubyk remembers receiving a lot of ridicule because “some people didn’t understand why I was afraid of the things I was afraid of. Because for them, these are just things that exist in nature. But for me, it was overwhelming.”

Dubyk vividly remembers the fears that dominated her first few climbing excursions: the spider that lurked in a climbing handhold, the pitch-black nights. She remembers that the first time she had to pee in the woods at night, “my friend had to hold my hand.”

While Dubyk soon found her footing in the backcountry, she faced another major obstacle: a diagnosis of advanced-stage lymphoma.

She had identified as an athlete for her whole life. “That was where I got most of my self-confidence from,” she explains. But illness and chemotherapy made her lose the strength she had so identified with.. Yet she was determined to come back from her illness stronger, both physically and mentally.

Now, she says, she’s not afraid of very many things: “I do not let fear dictate my life. I say yes.”

As a current pathology resident at the University of New Mexico, Dubyk explains that she has "so much life in my hands all day every day.” She appreciates climbing as an outlet separate from the intensity of her day job.

In some forms of climbing, climbers are supported by ropes and other climbers. But in bouldering — the variation of climbing Dubyk prefers — a climber does not have any support from ropes or harnesses. While bouldering, Dubyk isn’t responsible for the life of another climber at the other end of a rope. She can relax and focus on just reaching the top.

Dubyk is a firm believer in the importance of community and mentorship when introducing people to the outdoors.

“It is crucial, and it’s dangerous out there!” she explains. Community can serve as a “guide,” she says, city rules “don't quite apply in the woods.” Rock climbing specifically is “inherently dangerous if you don’t have some mentor to show you exactly what to do,” she says.

Having a mentor can remove some barriers to outdoor sports participation, even those outside the realm of safety, like cost. The first time Dubyk went climbing, she ended up spending thousands of dollars on equipment. A mentor, she explains, could loan a new climber gear and prevent them from having to spend what is essentially an entry fee.

For people of color, cost is not the only barrier to the outdoors, Dubyk says: There is a perception that it is only white people who participate in these sports. As part of her dissertation, Carolyn Finney, a scholar-in-residence at Middlebury College, found that only 103 people out of 4,602 included in photos from Outside Magazine were African American.

As a black woman, Dubyk explains that she is sometimes assumed to be a novice climber, despite her clear experience. “Racism doesn’t stop in these sports,” she says.

Dubyk’s mission to get more people into the outdoors is intertwined with an effort to overcome these misperceptions about people of color and the outdoors. She is a featured athlete with Melanin Basecamp, an organization founded by Danielle Willams ’08, which seeks to “increase the visibility of adventure athletes of color.” Dubyk blogs about her experiences as a climber of color on Melanin Basecamp’s website, which, she explains, helps to foster inclusive spaces online for people of color in the outdoors community.

“If you’re new to a place and there with your male climbing partner,” she begins in a paragraph on her Melanin Basecamp profile, “people might only ask the man for beta but not the girl.” Beta is information on the routes one could take when scaling a face, whether it be outdoors on a real boulder or inside the gym.

Dubyk says she finds a particular comfort in sharing her stories online. Oftentimes, she doesn’t have to “explain why [an experience] I endured is racist; I just tell them the story and they’re supportive. I don’t have to defend myself.”

“When you see someone who kind of looks like you, you think, ‘Oh, I could do that, too,’” Dubyk says. Growing up, she idolized Dominique Dawes, an African American gymnast, and had aspirations to follow in her footsteps.

“If young girls and boys can have that type of role model in other sports, it can open a whole new world to them,” Dubyk explains.

Perhaps Dubyk will now be a visible role model for many young kids today; she was on back-to-back seasons of American Ninja Warrior in 2018 and 2019, has her own climbing blog, is an ambassador for the outdoors brand La Sportiva, and posts climbing content for her more than 8,000 Instagram followers.

And from her first trip into the backcountry, Dubyk knows just how important having a guide can be: “If someone doesn't explain to you what that stack of rocks means, you could get lost out there.”

— Magazine writer Harrison R. T. Ward can be reached at harrison.ward@thecrimson.com and on Twitter at @H_Dubs10.