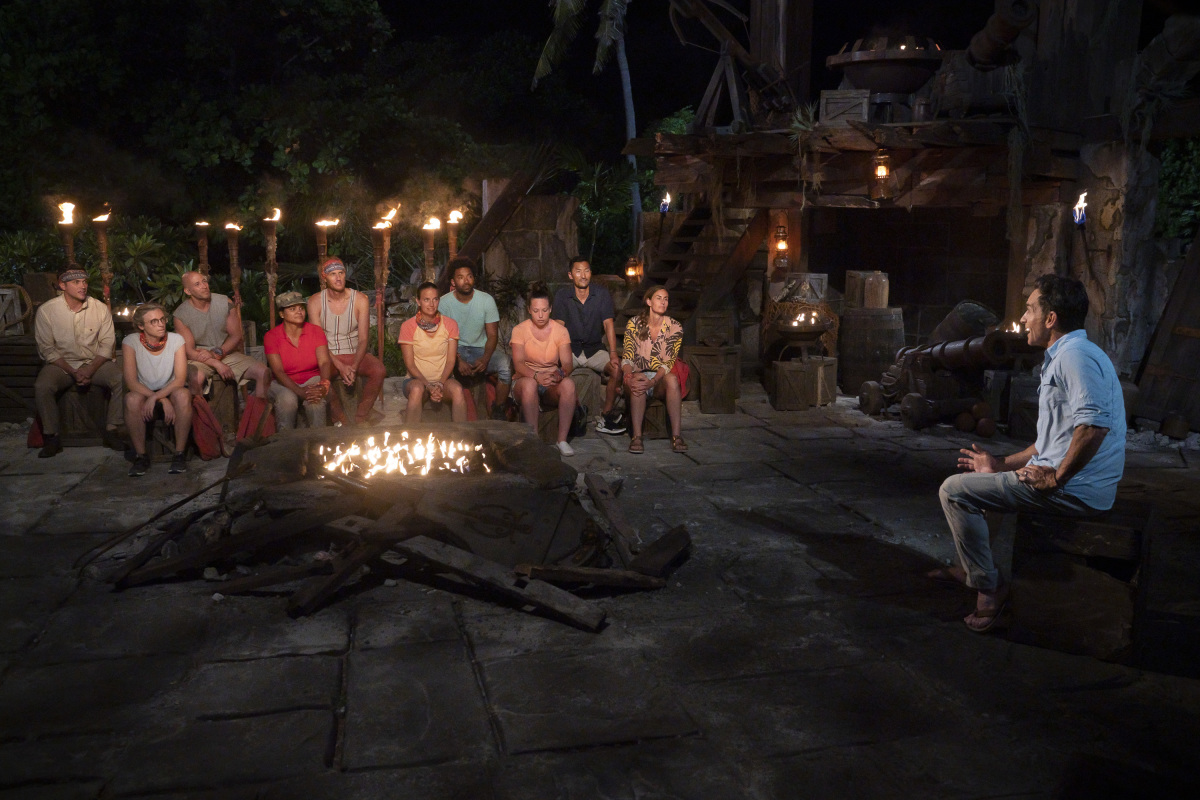 The Tribal Council on Survivor: By Courtesy of CBS
By Amelia Roth-Dishy, Crimson Staff Writer

“Survivor” is a game of elaborate, televised rituals.

One such ritual, known as the “loved ones visit,” occurs when six or so contestants remain. After 30 days of grueling challenges, chronic malnourishment, and demanding strategic play, “Survivor” flies out one loved one per player, usually a family member or spouse. Jeff Probst summons the visitors onto the beach one at a time from behind the trees. The clean loved one and the dirty, smelly player embrace, briefly, before the player (and occasionally the loved one) must compete in a challenge to win more time with each other. The winners traipse back to camp to enjoy a feast together. The losers get nothing; their loved ones wave goodbye and blow tear-stained kisses before disappearing back into the forest. Families across America are left verklempt.

The loved one’s visit is premised on a simple idea, one that Probst propagates freely in his pre-challenge banter: The mere experience of being held by someone who knows and loves you, of sharing a conversation with a person you can actually trust, is not just restorative but physically and emotionally energizing. It’s a reward that can sustain a player through the final nine days of the game, like peanut butter (an oft-referenced and highly treasured energy booster on “Survivor”) on steroids. It’s Day 30’s eleventh-hour savior.

So imagine the genuine surprise of “Survivor” devotees when, on April 15, they tuned into the 10th episode of this season — at which point ten players still remained — only to hear these words from Probst: “Even in a war like this, it’s important to lay down your weapons and remind yourselves what, and who, you’re playing for.” In came the loved ones, four weeks ahead of schedule.

The visible shock on the players’ faces, followed immediately by convulsive, joyful sobs and a fair bit of confusion, reflected my precise emotions. It was too early for this, I thought. The players weren’t truly exhausted yet, their emotional and physical resources insufficiently depleted. Not to mention, what would sustain them in the final days? Actual peanut butter?

Of course, the unusual visit fits the unusual season. “Survivor Season 40: Winners at War” is the first in show history to bring together a full cast of past winners. Each of these players has won the million; some have played the game two, three, even four times. They all owe their fame, desired or not, to “Survivor.” Some owe their entire careers, or formal lack thereof, to the show. But more importantly, “Survivor” owes them — their stars, the fan favorites who permit themselves to be sprinkled among seasons like viewership fairy dust — big time.

It felt cosmically fair, then, that CBS would fly out the players’ entire families for these most epic of competitors. Gaggles of young children poured out of the woods, some barely recognizing their parents and others running full-force into their arms. I couldn’t help but grimace at the thought of these kids being dragged back towards the waiting Fiji Airlines jet when their beleaguered parent inevitably lost the challenge.

But in an unprecedented first, there was no challenge. The players and their spouses and kids were sent back to camp to eat and be merry in one giant reality/“Survivor” crossover cookout. This is all not to mention the simultaneous loved ones’ visit to the castaways on the Edge of Extinction, a second beach where the very famous and popular players who have already been voted out are fiddling away the hours in televised purgatory rather than their homes. There — in a particularly heartwarming moment — Amber and “Boston” Rob Mariano, who met 20 years ago on “Survivor,” embraced their four children under the merciful auspices of the maniacal show that brought them together in the first place.

The resulting episode — a maximalist waterworks show covering a whopping 19 different family visits at once — wasn’t good, per se. There was little of the dramatic momentum that catapults the best episodes towards Tribal Council. Fully half of the episode was plotless — a sort of stylized Bring-Your-Kids-To-Work Day for “Survivor”’s royal families — filled with shots of cute kids frolicking in the Fijian waters. As such, all of the gameplay was squeezed, tepidly, into the back half of the hour.

But none of that mattered.

Much like the existence of the Edge of Extinction, the post-filming press junkets have indicated that the full-family loved ones’ visit was an important condition of return for some winners. “Survivor” wanted them back; they came, but with stipulations.

Herein lies the evolution of the twisted, loving push and pull between the game and its players. Imagine any “Survivor” contestant in the show’s first 10 years making public demands in exchange for their return. The show controlled them; it would have been inconceivable. Even today, the producers are the gods. Once on the island, players can do nothing but adapt to whatever’s thrown at them.

Yet in this episode, with its early and aggressively generous loved ones’ visit, “Survivor” bowed to gods of its own creation — literal totemic deities, even — as they finally dictated their own rituals.

These are the people’s gods. Nothing is more thrilling to us, the viewers, than an increasing sense of collective control over the game. It’s less a power struggle than a strong-willed crew of fans, players, and producers growing together into a real “Survivor” family where we get the kids on weekends.

I enjoyed every minute of this episode, melodramatic as it was. It might have had a little something extra to do with the sight of loved ones, kept far apart for an extended period of time, finally getting to hug and kiss each other again.

There’s no way the show could have predicted that this episode would strike a painfully relevant chord today, as many of us pine for a loved one’s visit of our own. And yet — with “Survivor”— anything’s possible.