Celebrities and Health Care Workers Come Together for ‘One World: Together at Home’ 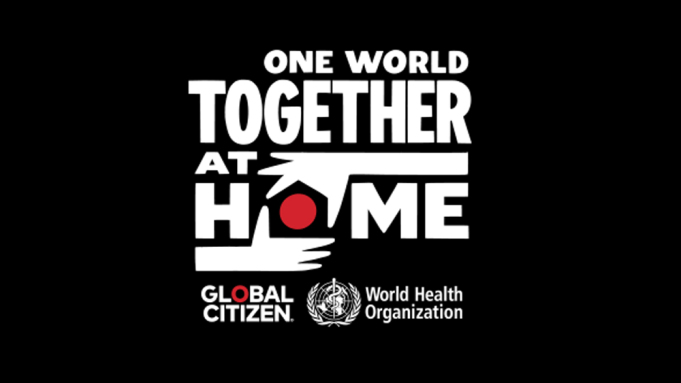 A promotional poster for 'One World: Together At Home.' By Courtesy of Global Citizen
By Sofia Andrade, Crimson Staff Writer

“Tonight is not a fundraiser, so put your wallets away,” Lady Gaga said to her viewers prior to the start of the World Health Organization and Global Citizen’s “One World: Together at Home” event, hosted by Jimmy Kimmel, Jimmy Fallon, and Stephen Colbert. “It is our love letter to the world.”

The two-hour event was broadcast on every network and platform under the sun, including NBC, ABC, CBS, YouTube, Prime Video, and Twitch. It was curated by Lady Gaga herself. The event also raised $127.9 million through commitments by corporations and philanthropists for the COVID-19 Solidarity Response Fund for the World Health Organization, but it urged its viewers not to donate. Instead, Lady Gaga suggested they take the time to thank essential workers, and to take certain actions online instead — such as calling a representative or signing a petition.

Before the broadcast, Global Citizen (an organization that works by rewarding “global citizens” for taking actions on their platform, such as signing petitions or posting on social media) streamed six hours of additional performances and celebrity calls to stay strong and to continue to practice social distancing. “One World: Together at Home” featured musicians of all genres and from all parts of the globe, from Paul McCartney to Burna Boy. In between the short, filmed-from-home performances, celebrities and major figures, such as Bill Gates, who Colbert introduced as “Melinda Gates’s husband,” and Dr. Tedros Adhanom Ghebreyesus, the Director-General of the World Health Organization, would give thanks to essential workers and health care professionals while urging viewers to stay home as much as possible.

“We got to take care of our health care workers and frontline by buying them time, by taking care of ourselves,” Matthew McConaughey urged during the event.

Lady Gaga kicked off the show by saying, “I care so much about all of the medical workers…. I think of them every day, I pray for them everyday, and I’m thinking of all of you at home…. What I want to do tonight, if I can, is to give you permission, just for a moment, to ‘smile, if your heart is breaking.’” Then she started singing Nat King Cole’s “Smile” from her piano at home. As with many of the performances, Gaga’s felt incredibly intimate as she sang directly to the camera and directly into her viewers’ living rooms.

The broadcast, along with its dozens of celebrity hosts and performers, drove its message of gratitude home by including individual stories of healthcare workers around the world. Among them was Dr. Sanam Ahmed from Mount Sinai Hospital in New York City, who attempted to give hope to viewers whose loved ones were currently suffering from Covid-19.

“I want people to know that if you can’t hold your mom’s hand, I’m there to hold her hand, and to tell your family that you love them and you care for them,” she said.

These sentiments were echoed by all the health care workers featured, who all cited their sense of responsibility to their communities and their families as a driving factor in their fight against the coronavirus. Other experts, too, were brought in to discuss the intersectionality of the pandemic — such as intersections with homelessness, class, mental health, race, and ethnicity — thus exemplifying a critical choice on the part of Global Citizen to include viewpoints that stem beyond the middle and upper-class narratives that dominate coronavirus coverage and policy.

Still, the program featured some questionable choices. Amid the performances and testimonies from heroes on the front lines were pathos-driven messages by major corporations like Coca-Cola and Verizon. Though the messages depicted their efforts to aid in the coronavirus pandemic, they felt out of place, detracting from the event’s focus on the heroes on the ground.

The Rolling Stones’ performance of “You Can’t Always Get What You Want,” too, was interesting. Though musically, it was flawless— with Mick Jagger, Ronnie Wood, and Keith Richards all on guitar — drummer Charlie Watts was placed in a rather peculiar circumstance, made to air drum on screen rather than play live. While this may be attributed to concerns of keeping tempo while streaming a performance, it made it so that once one noticed, one could do little else but pity Watts for having to pretend he was playing a cymbal and not the arm of his blue couch.

Highlights of the night included Stevie Wonder’s touching tribute to his “friend, the late Bill Withers,” Lizzo’s heartfelt rendition of “A Change Is Gonna Come,” and Keith Urban’s performance of “Higher Love,” in which he played with a “band” made up of different videos of himself in different parts of his large studio space — reminding viewers of the dramatic changes that the pandemic has necessitated of the music industry. Jimmy Fallon and The Roots, too, shared an uplifting re-writing of Men Without Hats’ 1982 hit, “Safety Dance.” “We can dance, everybody’s washing their hands,” Fallon sang, as videos of health care workers dancing and singing along took up the screen. In a broadcast which had focused, rightly, on the pain and challenges wrought by the pandemic, the playful performance was refreshing and hopeful.

The last performance of the night was especially touching. Vocal powerhouses Celine Dion and Andrea Bocelli were joined by Lady Gaga and concert pianist Lang Lang for an emotional performance of “The Prayer” in both English and Italian. The performance — for its combination of the musicians’ skill and perfect song choice — was stellar. The star-studded performance, shown on the screen as four different live-streams, was reminiscent of the 1985 USA for Africa performance of “We Are the World,” which also made use of the celebrity status of its singers to raise awareness.The performance was the perfect way to end a night of music and solidarity, no doubt leaving its viewers awestruck at its beauty.

“On behalf of myself and the thousands of Jimmy’s hosting tonight, we want to thank Global Citizen for making this show possible,” host Stephen Cobert said at the end of the event.

“And thank you for brushing your teeth. You didn’t need to do that but we appreciate it,” Jimmy Kimmel added. With that, the screen went black, a proverb glowing in the place of the three comedians: “For tomorrow belongs to the people who prepare for it today.”