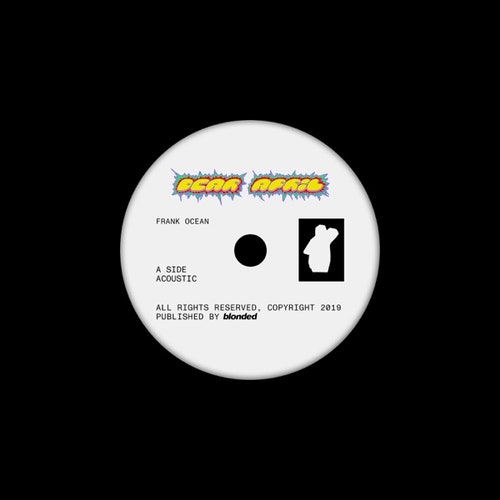 Frank Ocean, notorious for long stretches between his albums, occasionally appeases fans by dropping singles just when they need them the most. It wasn’t entirely surprising, then, when the elusive, beloved singer released two new songs, “Dear April” and “Cayendo,”earlier this month.

“Dear April” has compelling, enigmatic lyrics and a pleasing melody, but is not necessarily a standout ballad in Frank Ocean’s discography. Alongside relatively simple synth and guitar, Frank Ocean’s vocals helm the song. Perhaps the most captivating part is in the beginning, when Ocean breaks an extended synth chord with his emotive tenor and subtle vibrato, singing slowly and with yearning, “Dear April / The only face in the crowd that I know.” Though the role and identity of the titular April remains unclear, he immediately evokes a universal feeling with this first line — one person can be a comforting anchor in moments of unfamiliarity or uncertainty. Other lines are harder to figure out; “If you could take two strangers / Lead them left and right / At a certain place and time,” he leads up to the chorus, with lyrics that are almost frustratingly vague but somehow still meaningful.

Though the lyrics are thought-provoking, the song is melodically repetitive. This, coupled with a lack of progression in emotional intensity, makes it easy to like, but not love, “Dear April.” Without a memorable chorus, the homogenous ballad is an earnest attempt that falls short of its potential. To his credit, Frank Ocean’s vocals are never without raw emotion. “Dear April” is a vulnerable tribute to a deeply appreciated loved one; “Just like you made me new / Just like you took me through / Just like you woke me up,” he sings in the chorus at the end, but with more veneration — or perhaps more heartache — than before. Although lyrically ambiguous, “Dear April” ultimately evokes rebirth and renewal. In spite of its shortcomings, it’s still a song worth listening to this spring season.

“Cayendo” is another emotive ballad, but it establishes itself as tonally different from “Dear April” with the lonely landscape of a singular electric guitar backing Frank Ocean’s lyrics. Partially sung in Spanish, listeners don’t have to speak the language to comprehend the melancholy mood, which is conveyed by the tender and soulful lilt of the melody. Still, the lyrics are insightful and poetic, especially the verses. The third line, “Si esto no me ha partío', ya no me partiré nunca”, translates to “if this hasn’t broken me yet, I will never break,” hinting that “Cayendo” is a ballad for the brokenhearted. This is confirmed in the chorus, when the lyrics switch to English and he alludes to the pain of unrequited love with the well-crafted lines, “You stood me up, you lay me down / You know too much, I can’t be proud.”

In the chorus, interpolating Sade’s 1988 song “Love Is Stronger Than Pride,” he croons “I still really, really love you” twice over. Deviating only slightly from her original melody, the line is a definite ode to the musical prowess of Sade, one of the many influential R&B singers that paved the way for Frank Ocean’s career. A simple but effective line in 1988, it remains that way today as it plainly states that feelings don’t disappear as quickly as we want them to. After this interpolation, the delicate guitar melody underscores a repetition of the first lines of the song, but sung an octave higher and ringing with flamenco-tinged emotion. While “Cayendo” may at first seem unexciting in terms of musical range, this moment midway through highlights the gradual build up to a more moving moment that showcases Ocean’s vocal range.

The word “cayendo,” meaning “falling” in Spanish, comes up just before the chorus in a line that translates to “If I can stand what I feel, why am I falling?,” and again at the end of the song with the particularly beautifully sung line “acaso voy cayendo,” meaning “maybe I’m falling.” Even if the hook leans too much on the line of a Sade hit, it’s hard to ignore the evocative nature of the rest of the song, and how it seems to perfectly capture the painful vulnerability of being in love.

Although his 2019 single “In My Room” might be a more applicable song to listen to in COVID-19 quarantine, both “Dear April” and “Cayendo” are thoughtful and dreamy enough to gratify us until the long-awaited third album comes out.