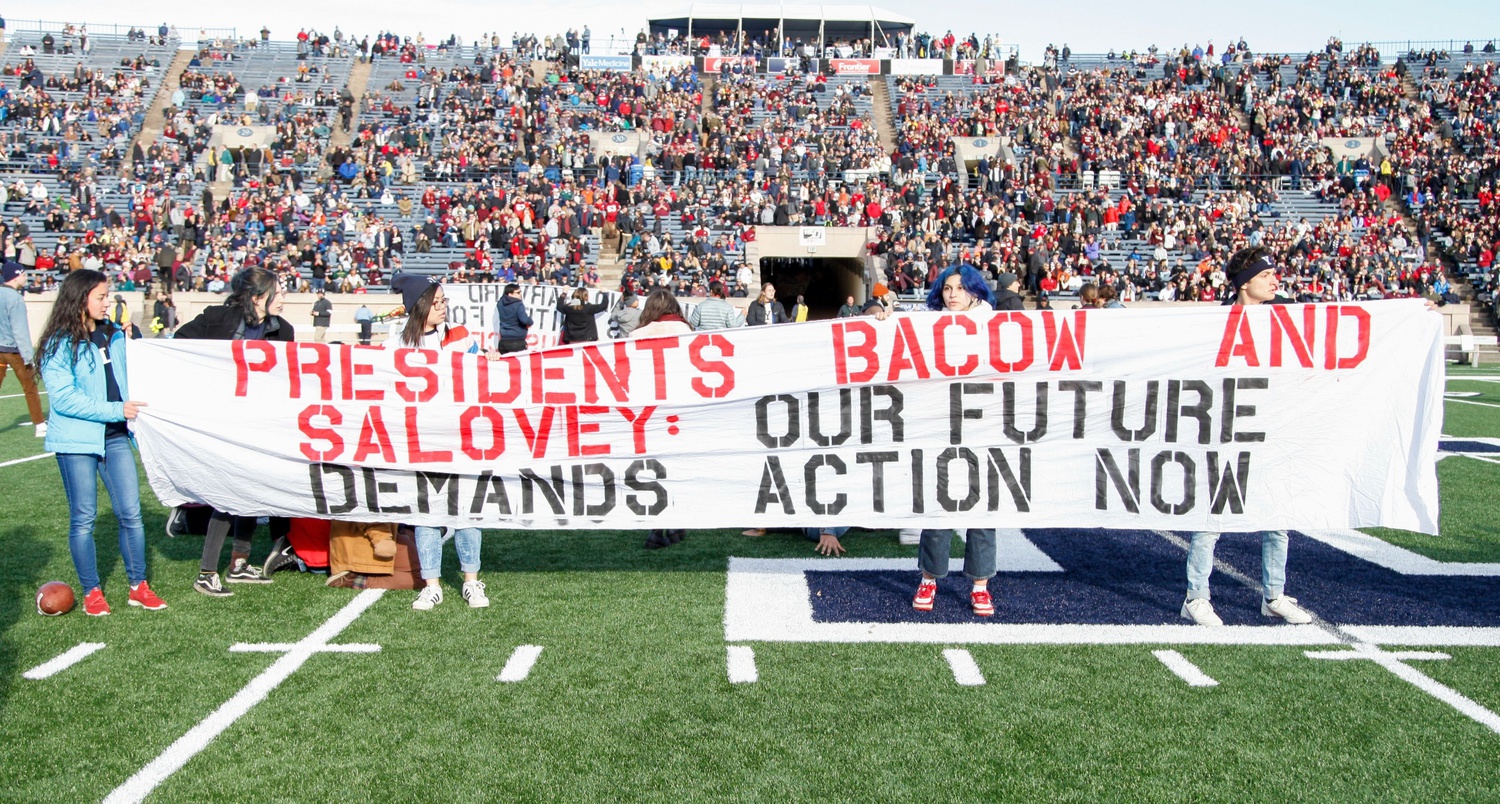 As protests against police brutality unfolded in the middle of a global pandemic, Divest Harvard and Harvard Forward convened a livestreamed discussion Sunday afternoon to ask what Harvard's responsibility is to a world in crisis. By Timothy R. O'Meara
By Ellen M. Burstein, Crimson Staff Writer

As protests against police brutality unfolded in the middle of a pandemic that has claimed over 373,000 lives globally, representatives from Divest Harvard and Harvard Forward convened a livestreamed discussion Sunday afternoon to ask what Harvard’s responsibility is to a world in crisis.

The event was originally billed as a discussion of crises related to “consequences of humans’ treatment of the natural world,” including climate change and pandemics. However, speakers frequently touched on the ongoing demonstrations following the murder of a black man, George Floyd, at the hands of a white Minneapolis police officer last week.

Chloe S. Maxmin ’15, a co-founder of Divest Harvard and a member of the Maine House of Representatives who moderated the event, began the event with a moment of silence for both the victims of the pandemic as well as victims of white supremacy and police brutality.

“Other leaders can speak far better than I can to police and prison reform. But I do now have a three-day old degree in environmental policy, so I’ll try to speak to that today,” Schwartz said.

“With every defense of the industry, Harvard normalizes its supposed imperative to profit from the things that are destroying us,” Schwartz said.

“We appreciate that advocates for divestment from fossil fuel companies may not be satisfied with this approach, but we believe that divestment paints with too broad a brush. We cannot risk alienating and demonizing possible partners, some of which have committed to transitioning to carbon neutrality and to funding research on alternative fuels and on strategies to decarbonize the economy,” Bacow wrote at the time.

“This Sunday, the smoke that’s troubling us most comes not from wildfires or even from power plants, but from cities, where people are rising up for some kind of justice,” McKibben said.

“When the threat becomes recurring and persistent, the survival process, the hormone response becomes dangerous and causes rapid wear and tear on body organs,” McKibben said. “The same communities that deal with wretched policing deal with coal-fired power plants sitting in the neighborhood, or refineries — they’re the communities that are always at risk, and they’re the same ones that have been paying the toll from coronavirus.”

McKibben said that Harvard’s resources place the University in a position of responsibility to address these crises.

“Harvard is the greatest example of establishment that we have in our country, the purest example of money, and power conferred on an institution and the people conferred on it,” McKibben said. “It is way past time that Harvard started trying to do something with all of that accumulated power and prestige.”

The panelist closed their portion of the event by discussing the role of academic institutions in relation to ongoing “structural crises,” including climate change and COVID-19.

McKibben praised research and activism by Harvard’s faculty and students but condemned the University’s financial ties to the fossil fuel industry.

“There is a trillion dollar industry whose business model demands that we not take climate change seriously, and it's that business that Harvard’s chosen to partner with over and over and over again,” he said.

Hollis said that academic institutions should talk to and engage with communities to find out what they need and to tangibly improve their circumstances.

“Communities are no longer willing to allow universities the behavior that they’ve had in the past, where they come to a community, and do something to them, and then take those results, publish them or whatever, and the community never hears from them again. Now it’s about what the community needs,” Hollis said.