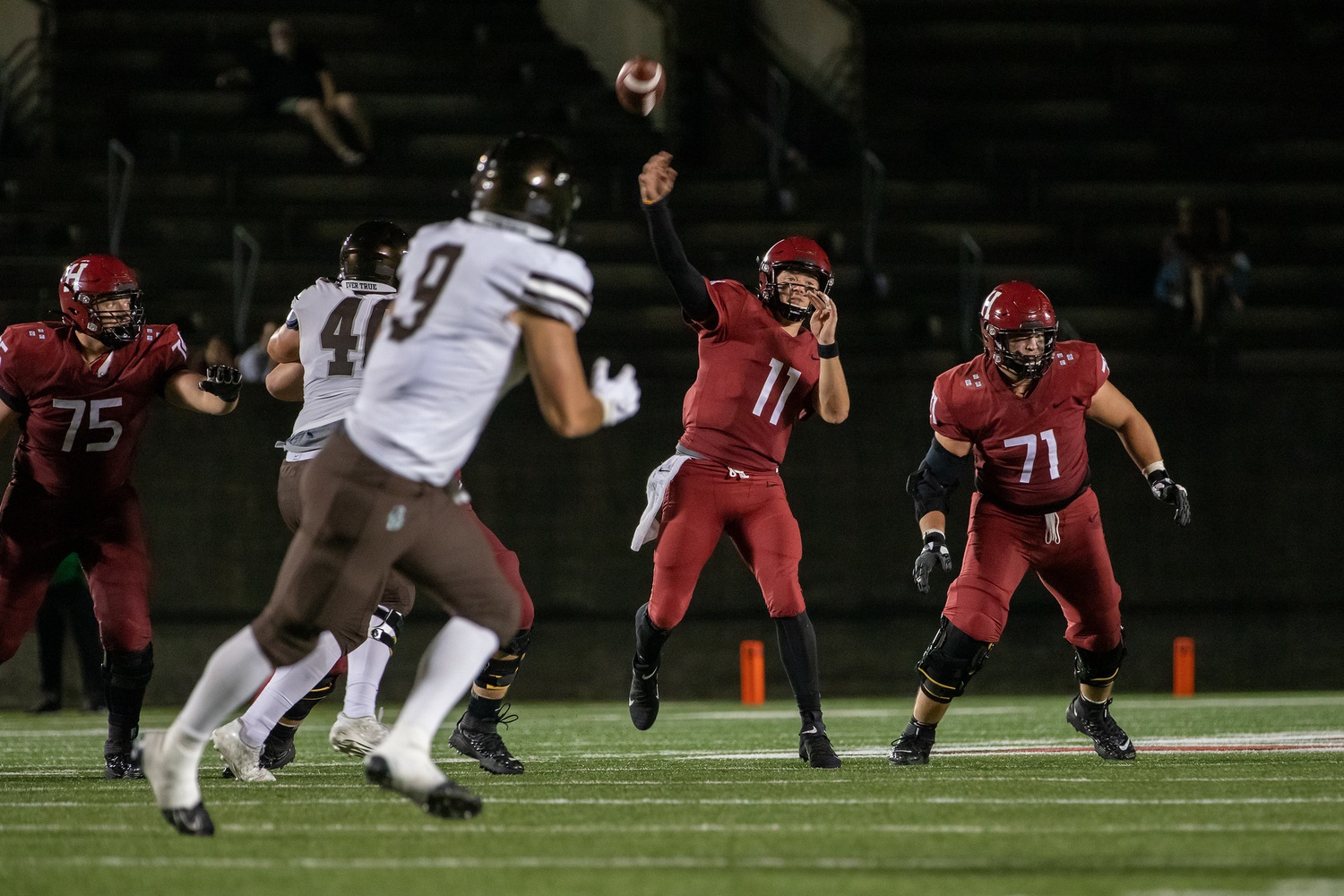 To be the best, you have to beat the best. For the first time this season, Harvard (2-0, 1-0 Ivy) will play a team ranked higher than it in national Football Championship Series (FCS) rankings polls, when it travels to Worcester, Mass. to play Holy Cross (3-1, 0-0 Patriot League). Holy Cross, after a 45-15 win over No. 19/20 Monmouth last week in West Long Branch, N.J., rose to No. 24/RV headed into Saturday’s game, which will be played at the Crusaders’ Fitton Field at 1:30 p.m..

Holy Cross’ win over Monmouth marked its second victory over the Hawks in school history and just Monmouth’s second loss in its new home stadium, Kessler Stadium, which opened in 2017. Defensively, the Crusaders managed to find success both through the air and on the ground against Monmouth, limiting them to 121 rushing yards on 36 attempts (3.4 yards per carry) and intercepting quarterback Tony Muskett while holding him to just 133 yards and a touchdown on 16/27 passing. Meanwhile, their offense ran smoothly and efficiently, with sophomore quarterbacks Marco Siderman and Matthew Sluka and junior punter Patrick Haughney combining for 308 passing yards, three touchdowns, and no interceptions. Their rushing attack, led by senior Peter Oliver (10 carries for 64 yards), racked up 199 yards on 32 attempts (6.2 YPC). Holy Cross surely hopes to keep up some of its momentum against the Crimson.

But Harvard is coming off a similarly impressive victory over its Ivy League rival, Brown, and currently sits in first place in the Ivy League. In its 49-17 win at Harvard Stadium on September 24, the Crimson held the Bears to just 14 yards rushing on 26 attempts (0.5 YPC), and, although it allowed 2019 All-Ivy First Team quarterback EJ Perry to pass for 346 yards, sophomore defensive back Khalil Dawsey returned one of his passes 77 yards to set up a touchdown. On the offensive side of the ball, sophomore quarterback Charlie Dean looks to continue his solid play from last Friday’s contest, when he completed14 of his 24 passes for 156 yards and a trick-play score on a 44-yard pass to junior wide receiver Kym Wimberley.

After rushing for 335 yards against Georgetown, Harvard’s offense again relied on its talented trio of running backs, with sophomores Aidan Borguet and Sone Ntoh and junior Aaron Shampklin combining for 189 of the Crimson’s 243 rushing yards in the victory. Shampklin was particularly efficient; after contributing 121 yards in his 13 carries against Brown, he leads the country with 152 yards per game and 11.26 yards per carry. Overall, Harvard’s rushing attack is ranked second in FCS, with 289 yards per game. Only perennial powerhouse North Dakota State has rushed for more, for the Bison have averaged 348.3 yards per game over three contests.

“Number one is the [offensive line]. They’ve been doing a great job up front, opening holes. They make our lives easier,” Borguet explained. “And lastly, I think it’s our brotherhood in the room. We all love each other. We all wish the best for each other. There’s no selfishness. We see each other in the game and we’re rooting for each other. So I just think all that collectiveness between us is something that we’re all proud of and something that we look forward to come game day.”

Borguet has fond memories of his last game against Holy Cross, a 31-21 victory in Worcester on October 19, 2019, when he turned his 14 carries into 75 yards (5.4 YPC) as part of an exceptional debut season that saw him win the Ivy League Rookie of the Year award. In fact, the whole organization does; overall, in their 71 meetings on the gridiron since 1904, Harvard holds a 44-25-2 record. The Crimson have emerged victorious in 7 of their last 10 games against Holy Cross, including a 52-3 trouncing in 2012. 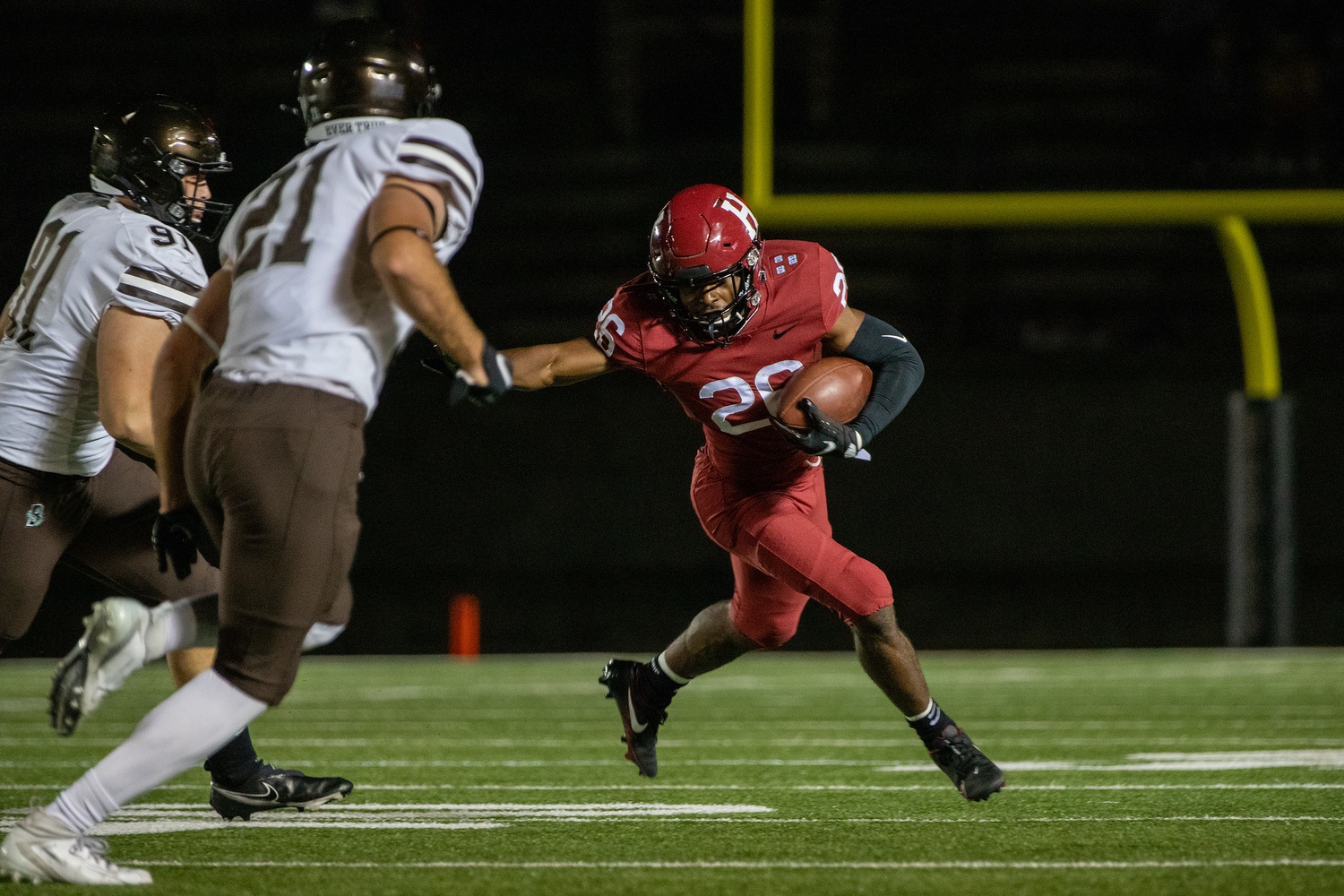 However, this is a new Crusaders team, now nationally ranked, and recent history matters little as Harvard readies for Saturday’s matchup. First-year defensive lineman Thor Griffith said that in practice, the defense has been watching film and preparing for specific play calls. Griffith predicted that the physicality of Holy Cross’ offensive line would prove to be the biggest challenge that his defense had faced thus far this season.

“As a defense, we’ve been looking up Holy Cross’ scheme and just being able to recognize plays and their different formations and what we’re going to do from their alignments,” he explained. “They’re a pretty standard offense, but their O-line: they’re big, they’re strong, they’re going to be the best O-line we face so far, so it’s going to be a challenge, but I think we can handle it.”

Despite praising the offensive line, he subsequently noted that Holy Cross head coach Bob Chesney and offensive coordinator Justin Roper rarely call for double teams, allowing their offensive linemen to be matched up one-on-one against a Harvard defender, an opportunity that he hoped to take advantage of.

Another unique feature of the Crusaders offense: it features a dual-quarterback threat, with both Siderman and Sluka contributing against Monmouth. Each quarterback attempted 15 passes -- Siderman contributed 181 yards and two touchdowns, while Sluka added 86 yards and a score. Additionally, although they both struggled on the ground against Monmouth, each quarterback is mobile. Siderman racked up 426 yards and 11 touchdowns on the ground as a high school senior at Westlake in Thousand Oaks, Calif., while Sluka actually led Holy Cross in rushing in his Patriot League Rookie of the Year campaign in 2021, totaling 268 yards and four touchdowns in four games during the shortened season. The quarterbacks’ favorite target is senior wide receiver Tenio Ayeni, who was an All-Patriot League second teamer in 2019.

Holy Cross boasts the 25th-strongest rushing attack in the FCS, averaging 188.5 rushing yards per game. Oliver, its senior running back, was named to the All-Patriot League second team in spring 2021, racking up 226 yards on 32 rushes, good for 7.1 yards per carry. He shared his second team bid with teammate Tyler Purdy, who also contributed on special teams. If they are to keep up their good form against Harvard, though, they’ll have to face an equally formidable opponent.

Griffith and the stout Harvard defensive line have allowed just 20 total rushing yards across its two games, the second fewest in FCS so far, behind only Ivy League rival Princeton, which has not yielded a net rushing yard. Standout junior linebacker Chris Smith leads the nation in forced fumbles per game (1.0) after punching out two against Brown, and overall, the Crimson is also second in sacks (4.5 per contest). In addition to Smith’s contributions, Griffith got through for a strip sack on Bears quarterback EJ Perry, allowing senior defensive lineman Justin Mitchell to scoop up the loose ball and score from 13 yards out.

“First off, we have a great senior core. We get a lot of good guys that are good leaders, then also we have a lot of younger guys like myself coming up that are really pushing the program along. And also, we have great coaches, great staff that’s really bringing us together,” explained Griffith.

On offense, sophomore quarterback Charlie Dean has done a great job protecting the ball, for Harvard has not lost a single turnover all season. For the season, Dean has completed 24 of his 43 passes for 250 yards and three touchdowns while rushing seven times for an additional 24 yards. Wimberley has been the most frequent beneficiary, hauling in eight passes for 101 yards and a touchdown. Sophomore quarterback Jack Bill, with his 59 yards on three catches, ranks second on the Crimson in receiving yards.

The high-powered Crimson offense will face Holy Cross’ defense, led by captain Jacob Dobbs, a junior linebacker who was named to the All-Patriot League first team in spring 2021. He amassed 41 total tackles, including 25 solo tackles, in his four games, and was named FCS Defensive Player of the Week after his 12-tackle performance against Fordham on March 27. Dobbs has started the season where he left off, contributing three sacks as the Crusaders managed to slow down the Monmouth offense. Overall, Holy Cross sports the 43rd-ranked rushing defense in FCS, allowing 128.2 yards per contest. Borguet recognized the threat that the fast and physical Crusaders posed, but remained confident in his team’s game plan.

“They’re a great team, all around. All-American linebackers, great D-linemen. We’re just looking to play our game at the end of the day. It’s less about how well they’re going to play us, and more about how well we can execute our own schemes and our own plans,” said Borguet. “I think sticking to our reads, trusting our o-line, and just making the most out of the runs we can get. Not expecting the big one early, take what we can get and just continue to chip and chip until the five-yard gains start to turn to ten-yard gains.”

If the Crimson win at Fitton Field, located just 38 miles away from Harvard Stadium, its 3-0 record would mark its best season-opening stretch since 2016, when it won its first four games. After a lively crowd of 20,748 helped propel his team to victory, Griffith was hopeful that some Harvard fans would take the one hour, 30 minute train ride to Worcester.

When asked if he hoped to recreate a home atmosphere at the nearby away game, his answer was simple: “Oh yeah, definitely. Can’t wait.”

For fans who can not make it to the game, it will be streamed live on ESPN+ and broadcast on 95.3 FM by WRHB.

-Staff writer Griffin Wong can be reached at griffin.wong@thecrimson.com.