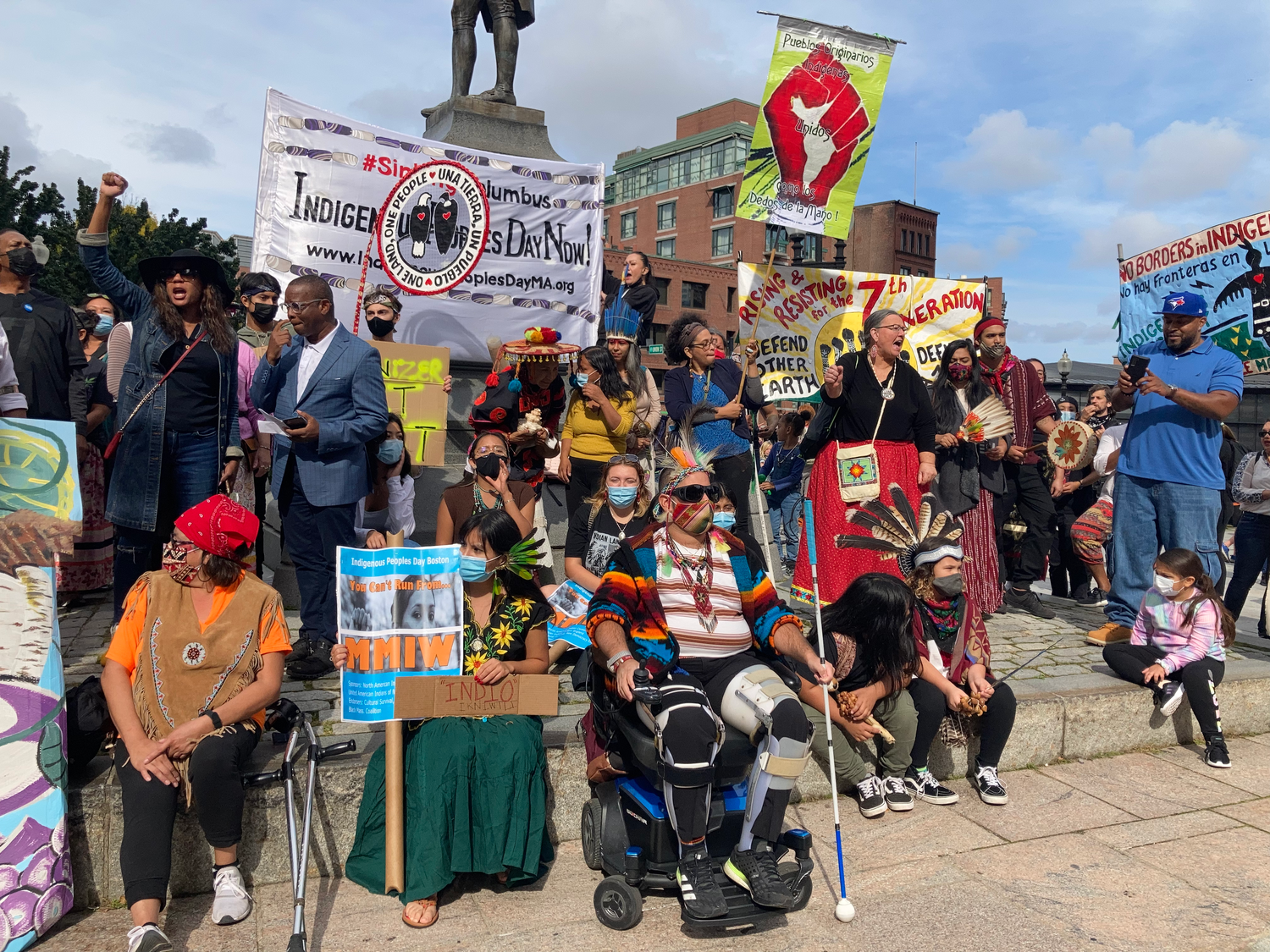 The Anger and Joy of Boston’s Indigenous Peoples’ Day March

"The people at the march span the spectrum of race, age, and gender. One speaker, Rebecca Lodgepole, a member of the Chippewa Cree, expresses gratitude for the turnout: 'Finally, today, I see everybody is listening,' she says. 'It brings joy to my heart.'"
By Benjy B. Wall-Feng

Beacon Street smells like sweat and burnt sage, and the crowd has quieted enough to hear Jean-Luc Pierite finish telling a story. “The sun plucked a feather from the eagle. She kissed it and she scorched the tip black. She said you will give this back to the Indians and you will tell them to wear it,” he says. “And you will tell them: As long as there is a sun, there will always be Indigenous peoples.”

It’s Saturday, Oct. 9. Pierite is a member of the Tunica-Biloxi Tribe of Louisiana and president of the board of directors for the North American Indian Center of Boston, one of several organizations hosting today’s march in support of Indigenous Peoples’ Day, for which hundreds of people have gathered at the edge of Boston Common. Behind Pierite looms a large tablet commemorating the sale of the park from a British-educated reverend to the Puritan inhabitants of the city.

The Saturday march has been designed in part to call for Massachusetts, a state steeped in colonial history, to officially recognize Indigenous Peoples’ Day. “One land, one people,” reads one attendee’s sign. “Una tierra, un pueblo.” Another says: “You are on stolen land.” Buffy Sainte-Marie’s “Bury My Heart At Wounded Knee” is playing from the speakers.

Indigenous Peoples’ Day falls on the second Monday of October — the same day as Columbus Day, which it was designed to replace. Native activists have rallied for recognition of the holiday for decades; on Oct. 6 of this year, Boston Acting Mayor Kim M. Janey officially established it in place of Columbus Day. The decision brought Boston in line with other nearby cities, including Somerville and Cambridge, and with several states across the country. On Oct. 8, President Joe Biden became the first U.S. president to recognize the holiday at a federal level. Biden also continued to recognize Columbus Day, which the organizer Mahtowin Munro dismissed as “talking out of both sides of his mouth.”

But in some ways the recognition of a holiday is the least substantive of the organizers’ goals for the march. Munro, a member of the Lakota nation and a leader of United American Indians of New England, calls for the passage of a series of bills currently before the Massachusetts legislature. In addition to establishing a statewide Indigenous Peoples’ Day, they would ban Native American mascots in public schools and teach indigenous history in classrooms. Munro and Pierite also demand the abolition of Immigration and Customs Enforcement, reparations for Black Americans, and the end of development on indigenous land “without free, prior and informed consent.”

The people at the march span the spectrum of race, age, and gender. One speaker, Rebecca Lodgepole, a member of the Chippewa Cree, expresses gratitude for the turnout: “Finally, today, I see everybody is listening,” she says. “It brings joy to my heart.”

But a kind of anger accompanies that joy.

She notes that the march is more than just a symbolic reclamation of colonial history. Instead, the importance lies in how the march provides the time and space for conversation about otherwise overlooked issues.

“We want you guys to stand up and spread the word,” she says, emphasizing that word of mouth is the only avenue for the news to get around the media’s “complete block on [them].”

“They will not report on us,” she says.

Lodgepole asks the attendees not just to recognize the importance of renaming Columbus Day to Indigenous Peoples’ Day, but also to acknowledge the goal of this action: for people to reorient their priorities, attention, and energy toward the movement for indigenous rights.

The march moves east on Market Street to Christopher Columbus Waterfront Park, where the crowd gathers around an empty pedestal. A statue of Christopher Columbus used to stand there, until June of 2020, when it was removed and decapitated. Three children whom Lodgepole identifies as Taíno climb up the marble slab.

“We’re standing here today because of the strength of our ancestors,” Lodgepole says. “They fought, they struggled, and they made sure that we made it out alive. We are fighting for the seventh generation, my children, all of our children.”