Strong Second Half Sends No. 12 Field Hockey Past Yale 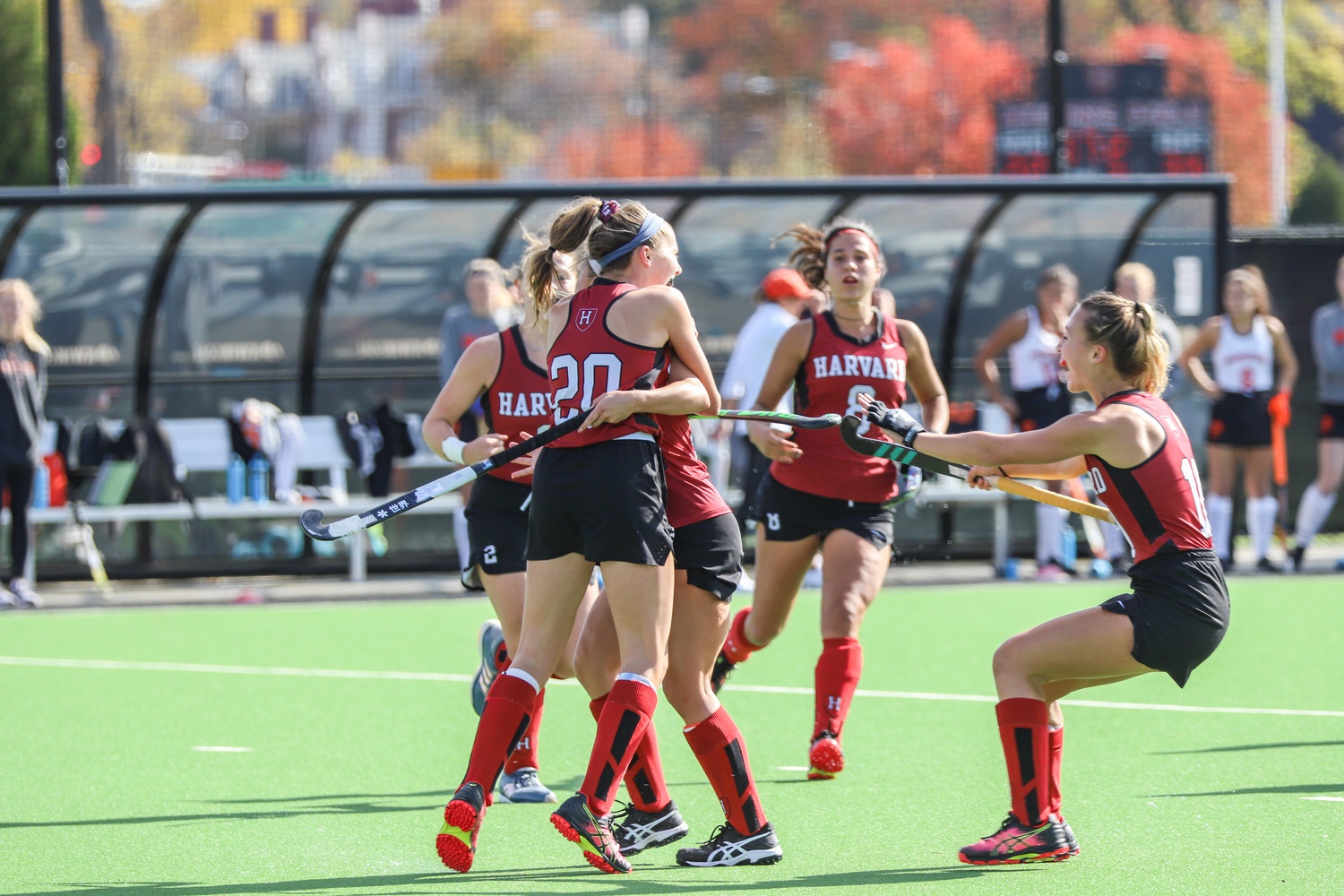 Harvard field hockey (pictured celebrating in 2019) has defeated Dartmouth (Oct. 16) and Boston University (Oct. 18) since its 3-1 win over Yale on Oct. 9. By Quinn G. Perini
By Maddie B. Barkate

As is expected of Harvard-Yale games, it was a close and intense contest.

“Harvard-Yale in every single sport is such a traditional, competitive game with a little rivalry between the two teams,” head coach Tjerk van Herwaarden remarked. “I think we headed down there with the same expectation that [Yale was going to] do whatever [it] could to take it to us.”

An early goal in the first quarter by sophomore defender Mazarine Broze put the Crimson up 1-0. However, after this strong start, Yale surged back in the second quarter off a corner goal by junior midfielder Théodora Dillman.

“[From there, it was a] typical Havard-Yale Ivy League energy-driven game with some back and forth turnovers and some opportunities on both sides,” van Herwaarden said.

The score was to remain at 1-1 through halftime until Harvard came roaring back, scoring two strong corners off the stick of first-year forward Megan Joel.

“[We] did a really good job of trusting the process, our structure, and importantly each other, which I think is what contributed to the change in our game to take the lead in the end,” senior back Hannah Pearce said.

Joel has had a strong season so far and was joined on the stat line by Pearce, who leads the team in points with nine goals and two assists. With such a strong corner unit, the Crimson was able to capitalize on opportunities against the Bulldogs.

Van Herwaarden mentioned that Joel’s skill and Harvard’s commitment to the game plan allowed them to use Joel’s second goal as a planned corner.

“We knew that there was a weakness on that side, so we abused it to an extent and got the goal for 3-1,” van Herwaarden said.

Although Harvard’s offense certainly did its part to propel the team over Yale, its defense also held its own. The Crimson held the Bulldogs to no shots on goal in the second half. There has not been a team that has scored more than one goal against Harvard.

“We understand that we can bank on a very solid defense,” van Herwaarden said, “[even if it] is [not] something that we play for.

Although the services of junior goalkeeper Ellie Shahbo were not needed in the second half, she was able to make two saves in the first and is a large contributing factor to the strength of the Crimson’s defensive unit.

After another win this past weekend at home against Dartmouth, 4-0, followed by a non-conference victory against Boston University on Oct. 18, 1-0, Harvard’s next in-conference game will be a battle at home on Oct. 23 against the Princeton Tigers (8-5, 5-0) to determine which Ivy League team will remain undefeated in-conference.