On Anderson Cooper’s ‘Vanderbilt’: Extravagance and the American Elite 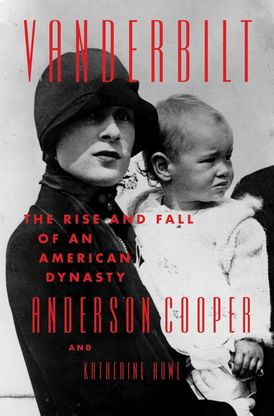 Cover for "Vanderbilt: The Rise and Fall of an American Dynasty," written by Anderson Cooper and Katherine Howe. By Courtesy of HarperCollins
By Karen Z. Song, Contributing Writer

On Sept. 24, viewers from around the country gathered in a virtual space with Anderson Cooper and novelist Katherine Howe to discuss their co-written new book, “Vanderbilt: The Rise and Fall of an American Dynasty.” Organized by the Miami Book Fair and bringing together 22 independent bookstores across the United States (including our very own Harvard Book Store), the hour-long Zoom event gave attendees the chance to hear from the authors themselves and ask questions.

The book tells the tale of Cooper’s heritage, tracing back to his great-great-great grandfather, American railroad baron Cornelius Vanderbilt (also known as “the Commodore”). The Vanderbilt name is now synonymous with high society, and in “Vanderbilt” Cooper and Howe explore the story of how the Vanderbilts became one of America’s most iconic families. Details are divulged about generations of lavish wealth, eccentric aunts and grandfathers, and the life of the “last Vanderbilt,” heiress and fashion designer Gloria Vanderbilt — Cooper’s late mother.

In talking about their motivations for working on this novel, Howe and Cooper both shared the preconceptions they had about the life of Cornelius Vanderbilt and the legacy of his family.

Cooper spoke to how his impressions of Cornelius Vanderbilt changed before and after writing the book.

“I knew the Commodore only cared about money, I knew [that] he had been terrible to his family members, that he seemed disconnected from those around him in many regards,” he said. “But once I saw how the others dealt with the money, I came to at least appreciate his work ethic.”

Cristina Nosti is the Events and Marketing Director for Books and Books, a chain of independent bookstores in Florida. Nosti, along with a team from bookstores all across the United States, joined forces over the pandemic to bring these virtual book events to readers across the world. As with many other industries, the pandemic forced bookstores to adapt to a virtual space and to figure out how to bring their customers with them. However, with the barrier of physical travel removed for both authors and attendees, new possibilities opened up.

“What the virtual world did was make things a lot easier for people to say ‘yes’ from all over the world,” Nosti said. She also credits the pandemic for the partnerships that arose amongst independent bookstores.

With the event’s virtual format, attendees benefited from the accessibility.

Jennifer E. Lawyer Wilson attended the event from Temple, Texas. “Obviously being from a fairly small community, I don't have as much access to a lot of the book events or authors speaking so it was nice to be able to see something like [this book event] and not have to travel to a big city,” she said.

The event’s chat box was filled with one-liners from an engaged audience. Some attendees were there based on their own familial connection to the Vanderbilts. Ariel C. S. H. Ehrlich, a 15-year-old student from the Upper West Side of Manhattan, found out that he was a descendant of the Vanderbilt family through genealogical research.

“It was really interesting to hear this different narrative [of] the Vanderbilt dynasty: how Cornelius ‘the Commodore’ really rose to power, how brilliantly he did that, and the eventual collapse of Gilded Age wealth,” Ehrlich said.

He was excited to attend an event hosted by Cooper, who Ehrlich looks up to as a role model for young gay men.

“I think it’s really monumental that the true story of the Vanderbilt family is being rewritten by a gay man, a single father,” he said.

Many audience members were interested in Cooper and his role as a major figure in American media, while others were drawn in by the life and character of his mother.

“I think the thing that fascinated me the most was [Cooper’s] discussion on these individuals who were affluent yet had squandered their lives,” Josephine A. Bulkley, a psychotherapist based in Washington, D.C., said. “And I think that was telling for Anderson who by all accounts has done everything to help people in spite of his wealth and [personal] tragedies.”

Another attendee found Cooper’s openness to criticism unique. “He mentioned that he received responses that poked at his rich privilege in inspecting his ancestry at a time where people are dying of Covid, losing their jobs, and are struggling to make ends meet,” said Manveer Dulay, a content writer based in British Columbia, Canada.

Cooper’s takeaway on the Commodore after working on the book?