What the Hell Happened: X Æ-12's Parents’ Partnership comes to an ‘End.’ Grimes Turns to Marx. 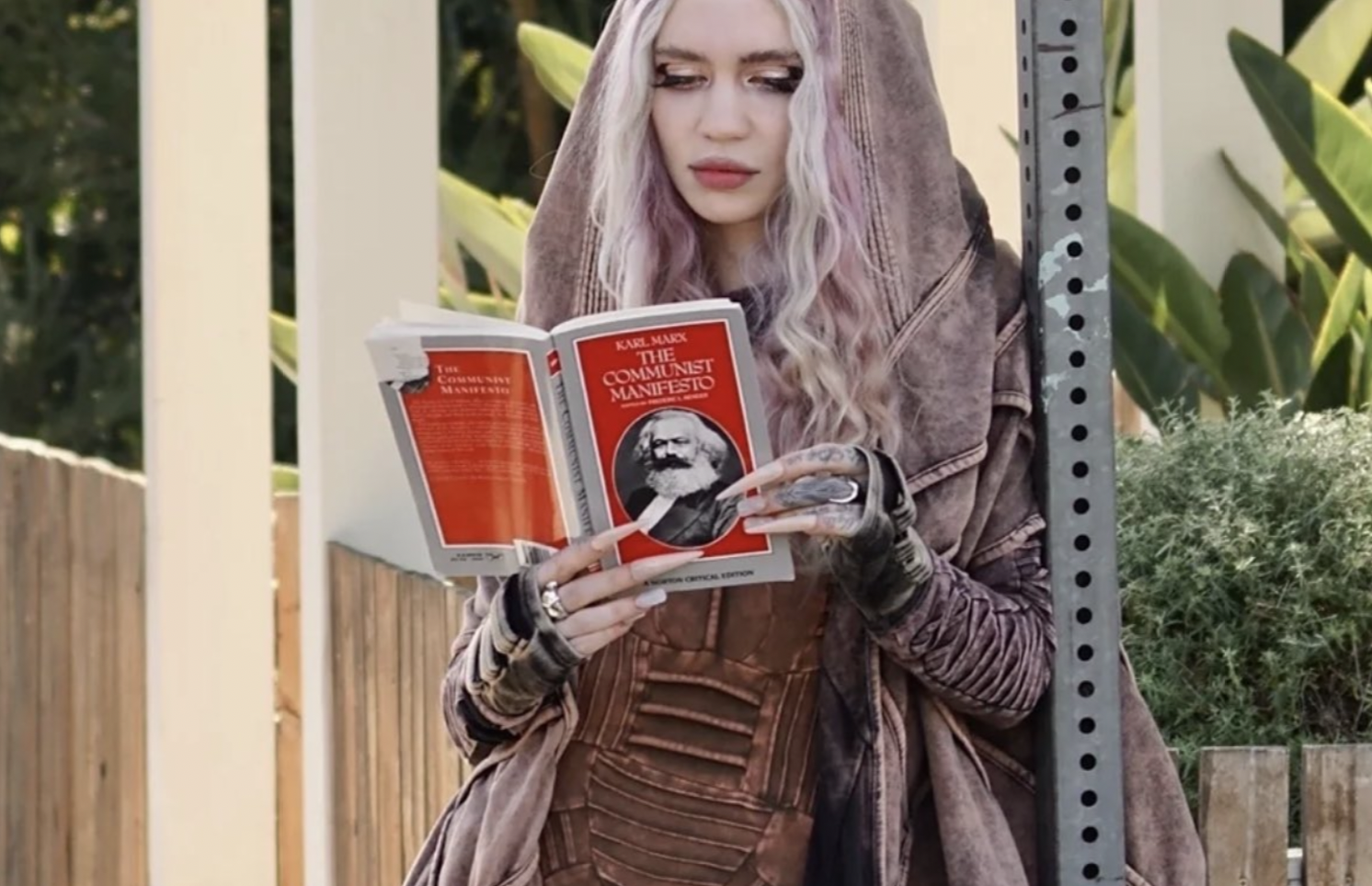 Grimes was spotted reading "The Communist Manifesto" earlier this month. By Courtesy of Grimes @Grimezsz
By Abigail A. Golden, Contributing Writer

If you’re at all acquainted with Instagram or Twitter, you’ve likely stumbled across the image of a contemplative Grimes, in a getup straight out of “Dune,” leaning against a street sign and reading “The Communist Manifesto.” The pictures began circulating after Grimes, born Claire Elise Boucher, “semi-separated” from Tesla founder Elon Musk, with whom she had been in a three-year romantic partnership until September. They also welcomed a son together in 2020 with a name so absurd it violated California state law.

The “semi-separation,” which one would be hard-pressed to call a formal break-up considering the two are on good terms and still live together, was confirmed by Musk to Page Six and comes after copious trolling and several public disputes between the pair, including a heavily meme-ified Twitter exchange between the two regarding pronouns. It’s amid the chaos surrounding this split that these pictures of Grimes’ acquaintance with Marx and Engels surfaced.

Unfortunately for some, the stunt was not the hilarious double back on Musk that stan Twitter hoped it would be: On Oct. 3rd, Grimes revealed on Twitter that she had posed with the book to troll paparazzi, and on Instagram affirmed that she is not a communist while stating, “I’m more interested in a radical decentralized ubi [sic] that I think could potentially be achieved [through] crypto and gaming but I haven’t ironed that idea out enough yet to explain it.”

Despite the claim that she does not identify as a communist, she published a TikTok seemingly aligned with communist beliefs just 4 months ago on June 6, captioned “A.I. Is the fastest path to communism.” In the video, she issued a vague and sometimes laughable rant arguing tha A.I. could essentially weed out political corruption and ensure the general population’s basic needs are met. Many celebrities claim to abstain from participating in any political discourse so as not to unfairly influence or misguide fans, but Grimes’ inability to commit or articulate any concrete political stance is not due to her humility. It’s also important to note that despite her alternative style and music releases, Grimes is apparently a product of circumstance: a woman born to wealthy parents who, even without being attached to the richest man in the world, has a net worth of about $3 million from her career. Her privilege allows her to don socialism at will to appeal to her target demographic — a primarily young, democratic, and LGBTQ-identifying fanbase — and discard those ideas when accused of hypocrisy because of her choice in exorbitantly wealthy, occasionally transphobic partners.

At the end of the day, Grimes is a pop culture figure first, and a political philosopher somewhere around twelfth or thirteenth. No matter how much incoherent theory Grimes deploys via various social media platforms, the reception on social media appears to range from amusement to exasperation, scarcely touching serious consideration of her ideas. It’s a potentially worrying trend to see unqualified celebrities dishing out unsolicited advice on policy, but if all the people trolling her are any indication, we have nothing to worry about.