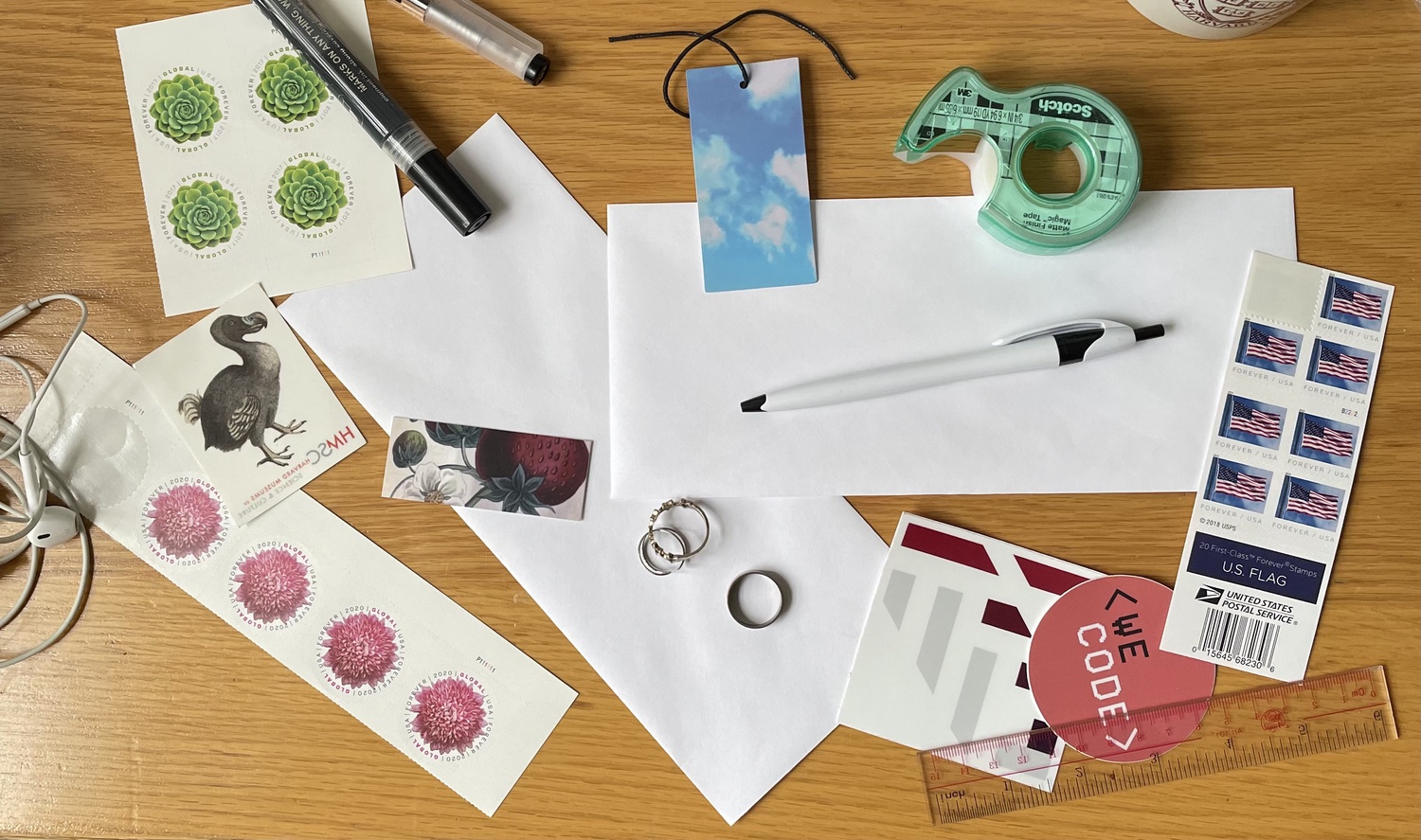 From Me, in Cambridge, with Love

Letters sent by mail are outdated, yes. But they are snapshots of time, the culmination of a friend’s life between the day they mailed their last letter and the moment they sat down to write this new one.
By Christina M. Xiao

Throughout the week, I collect wilting leaves from plants, scraps of colored paper, and tea bags with names like “Honey Chestnut Bonfire” and “Marigold Hibiscus Wonderland” — all the detritus of a world in a constant cycle of use-discard-grow-outgrow-buy-sell.

On Saturdays or Sundays or even the rare Tuesday afternoon, I sit down and write, first in my chicken scratch handwriting and then transcribed onto my laptop in whatever point font means I’ll only have to pay for one page of printing: “Hi.” “I miss you.” “It’s so nice to hear from you!” “How are the roommates?” “As always, I am running out of time.”

The recipients of these words and trinkets are, in no particular order: a girl in France who is the only person I’ve ever trusted without thinking. A boy from Somerville who shares a name with my favorite actor and goes to my school; I haven’t seen his face so anyone I pass by on campus could be him, but I’ll never know. The most lesbian lesbian I’ve ever met. My best friend from pre-k whom I lost and then found again, just a couple miles from home.

We swap poems and custom playlists and bad drawings of fruits and handfuls of stickers. They cannot parse my handwriting. They understand what it’s like to feel like you’re constantly running out of time. They wish things were different but can’t pinpoint exactly why. I love them all, and I try to tell them in the best way I know how: by sending letters into the sprawling system of the United States Postal Service and hoping they reach my penpals.

As much as I cherish my penpals, the average lifespan of this kind of relationship is only three to five letters. Life simply moves on faster than the postal system — it’s why we call it snail mail. By the time I read a letter, it’s already outdated, an anachronism like the very medium it was sent through. I moved three times last year in the time it took Somerville Boy to send me his first letter. I sent a letter to French Girl when she was my girlfriend, and when she received it she was already my ex-girlfriend.

I could text these people. I have their numbers. I do text some of them, sending my miscellaneous thoughts on the limits of sleep deprivation and pictures I can’t be bothered to print in color. There’s nothing in the letters themselves that I can’t replicate in text: e-gift cards to local cafes instead of bags of tea, pictures of my baby plants instead of their dead snippings, actual photos instead of crude drawings.

In fact, there are more things I can send by text than mail: GIFs and emojis and clickable links to funny tweets, to name a few. Not to mention the obvious speed of texting compared to mailing letters — they call it “instant messaging” for a reason, too. Why wait weeks on end for an outdated letter that might never come? Why put faith into the United States Postal Service when cell towers and satellites are so much more dependable? We don’t even mail important documents anymore; we email or e-sign them.

Still, I keep sending mail. The physicality of letters is valuable to me. In our digital world, texts and DMs and phone calls get buried and eventually deleted when phone storage reaches its limit. Conversations move faster than we can process, and there’s no way to save it all. The world spins, and data is lost.

Meanwhile, the letters I’ve received sit in carefully-crafted piles on my desk, organized by send date and author. They are few and far between enough for me to know them all by heart.

The letters are tangible manifestations of effort and intent. They say, “I sat down and put pen to paper for you. I sat down and thought about what I wanted to tell you and narrowed it down to these two or three pages. I wanted to tell you exactly this and I did.” Talk is cheap — especially under T-Mobile’s unlimited data plan. Limited by pen and paper, letters force us to distill every line into the most concentrated version of what we want to convey. They make us more honest, less standoffish. There are things you can only write when you know the response will take weeks to contemplate and pen.

Letters sent by mail are outdated, yes. But they are snapshots of time, the culmination of a friend’s life between the day they mailed their last letter and the moment they sat down to write this new one. This temporal distance allows each letter to be embedded with the weight of several weeks, or even months. Time flows from the broad past into a sharpened point marked by the send date. The future remains an amorphous unknown to be filled in by the next letter.

As I write every one of my letters, painstakingly condensing thoughts into the crux of the issue and folding origami paper swans, I think about what my penpalling friend might be doing at the same time. Even with the texts we’ve exchanged regarding newly-started TV shows and anecdotes about neighborhood animals, we don’t really know how the other is doing at the moment. I will send out my letter, the culmination of me at this moment, without knowing who they really are in this same moment. And I will wait weeks on end for the letter sent in return, to know them back.

— Staff writer Christina M. Xiao can be reached at christina.xiao@thecrimson.com.