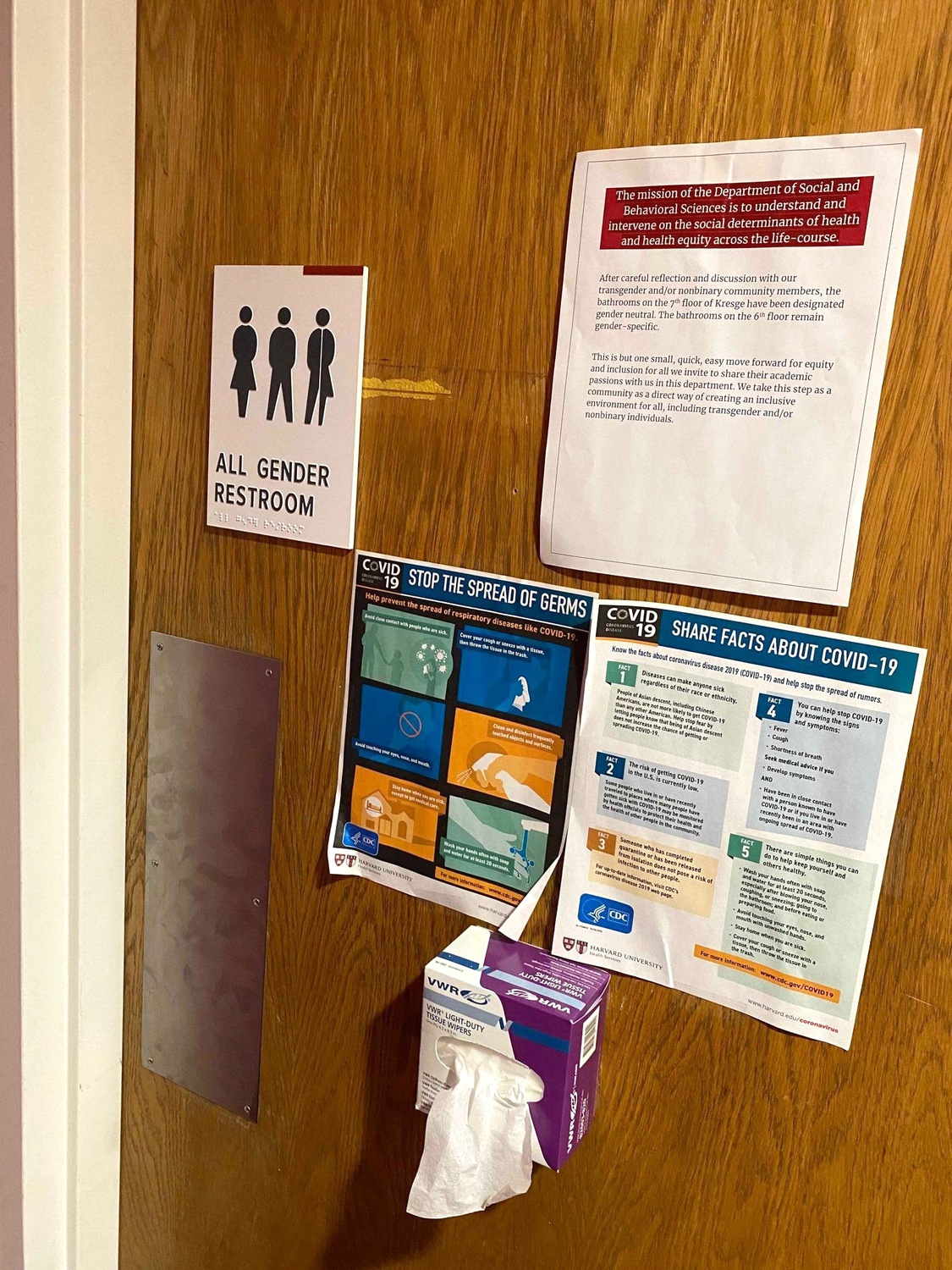 After public advocacy, the Harvard T.H. Chan School of Public Health has designated several of its bathrooms in the Kresge building as gender-neutral. By Courtesy of Jennifer L. Cruz
By Ariel H. Kim, Crimson Staff Writer

The School of Public Health designated two additional gender-neutral restrooms in its Kresge building on Oct. 26, following student activism and widespread faculty support for the measure, per a Social and Behavioral Sciences department-wide email last week.

Prior to the change, HSPH had 19 all-gender restrooms across its four main buildings at the Longwood campus since June 2017, but only one was located in Kresge on the ground floor near its entrance.

Sam R. Mendez ’14, a PhD candidate at HSPH studying population health, said the all-gender restroom was the only one they felt “most comfortable” using. Mendez added the bathroom had long wait times due to its convenience and roominess.

Even Paglisotti, another PhD student in Population Health Sciences, said it takes them “far longer than most students” to find the nearest bathroom they can use.

“Especially in the middle of the day, in the middle of a class when you’re given a five-minute break, I’m guaranteed to miss lecture time while I’m running across the building to the nearest bathroom,” they said.

Mendez said difficulty using the singular all-gender restroom reminded them of their ongoing struggle with their gender identity.

“Every day it kind of felt like I was reminded just of that process of figuring that out,” they said.

Paglisotti said they noticed the dearth of all-gender restrooms as soon as they arrived on campus in September, and immediately raised their concerns at a Social and Behavioral Sciences department-wide meeting the same month.

“What was said was, ‘We can’t change the facilities. They’re physical structures and we would have to go through the University,’” she said. “Our department has two floors, so it’s an easy fix, and it could just be a community decision.”

When more all-gender bathrooms were not designated in Kresge by late October despite overwhelming faculty support, Mendez said they decided to take matters into their own hands and change the signs themself.

“If everyone supports it, if we have the resources, it could be as simple as just saying that these are now gender neutral bathrooms,” they said.

Starting Oct. 22, Mendez took down a series of gendered bathroom signs on the 3rd, 5th, and 7th floors of Kresge and posted homemade signs designating them all-gender. They also put up flyers directing people to reach out to HSPH administration with any feedback.

Michelle Williams replied to Mendez on Oct. 26, informing them that all-gender signage had been installed on the 5th and 7th floor bathrooms in Kresge.

David Williams sent out a department-wide email about the updated signs on Nov. 2, though a school-wide announcement has yet to be sent out.

Social epidemiology professor Nancy Krieger, who was present at the September department-wide meeting, wrote that she believes the change was made “relatively quickly.” She added that designating more all-gender bathrooms in Kresge is a “concrete, physical demonstration of a willingness” by the institution to be more gender-inclusive.

HSPH Master’s student Merida Brimhall said she hopes to see “all of the bathrooms” made gender-neutral and the removal of signs with images of gendered dress.

Jarvis Chen, a lecturer in the Social and Behavioral Sciences department, wrote in an emailed statement that HSPH must continue to work to improve the inclusivity and belonging of students, faculty, and staff identifying as part of sexual and gender minority groups.

“It should be noted that designating bathrooms as ‘all gender’ in no way removes facilities for use by cis-gender women and men in the community,” Chen wrote. “What does change is that trans and non-binary members of our community can feel comfortable using public accommodations and not feel excluded or unwelcome.”

HSPH will form a working group including non-binary and trans individuals to expand inclusive practices related to gender identity and access to gender-inclusive restrooms across campus, according to the school.