‘Go 1-0 This Week’: Harvard Football, Needing Two Victories and Some Help for a Conference Title, Grounds Itself in the Present 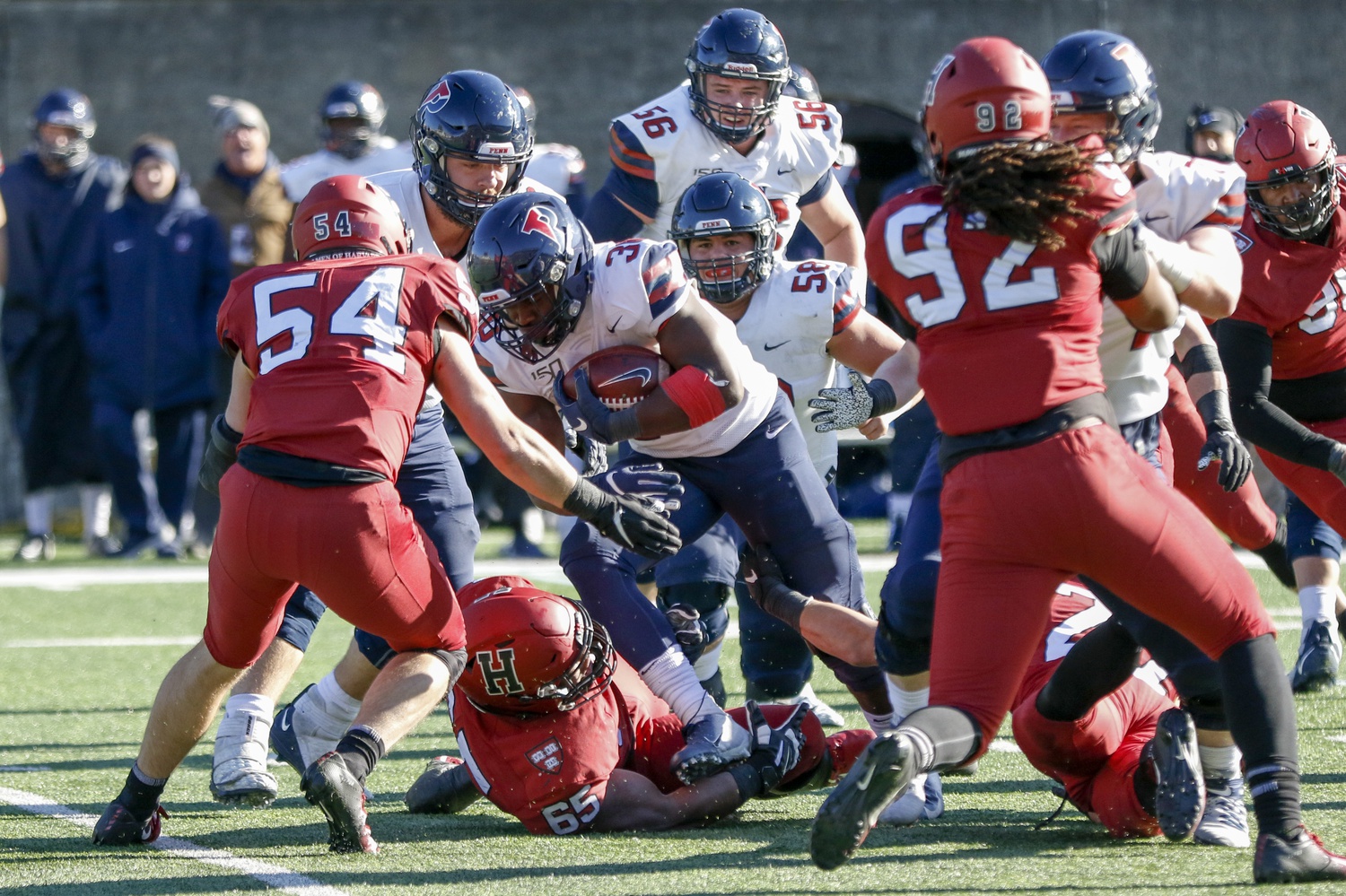 The Crimson and Quakers last squared off on Nov. 16, 2019, when Penn emerged with a 24-20 win. By Timothy R. O'Meara
By Griffin Wong, Crimson Staff Writer

When Harvard (6-2, 2-2 Ivy) welcomes Penn (3-5, 1-4 Ivy) to Harvard Stadium on Saturday afternoon, it will mark a celebration and an ending. The matchup is the Crimson’s last home game of the season, for next week the team will travel away from its friendly confines, where it has gone 456-227-34 (.660) all time. On Saturday, Harvard will celebrate the 18 seniors on its roster as the squad plays on Soldiers Field for the last time.

The Crimson is coming off an underclassman-led effort in its last game, a 49-21 victory over Columbia on Nov. 6. Junior quarterback Luke Emge threw for 205 yards and three touchdowns, sophomore running back Aidan Borguet and junior running back Aaron Shampklin each found the end zone twice, junior wide receiver Kym Wimberly became Harvard’s first 100-yard receiver this season, and first-year defensive tackle Thor Griffith led the defense with seven total tackles, including three for a loss and a 12-yard sack. But it is the team’s senior captain, linebacker Jordan Hill, whose leadership has helped keep the Crimson grounded and hungry coming into the Penn matchup.

“We didn’t finish the game the right way,” said Hill after Harvard allowed three touchdowns in the second half against the Lions. “You need to be able to finish in the games that really matter. And against Penn and Yale to finish out the season, those are going to be good games. So the fact that we won by such a margin isn’t even something that we’re really talking about — it’s more the fact that we gave up three scores in the [second half].”

Senior linebacker Andrew Irwin, who has made 62 tackles over his four-year career, embraced Hill’s message. In 2019, Harvard was statistically worse in the second half, being outscored by opponents 144-130 after halftime after winning the first two quarters, 166-84. So far this season, that trend has held: in the first half, the Crimson has scored 187 points and allowed just 35, and although it is winning second halves as well, the margin is considerably thinner: 100-76. Irwin was hopeful that his team would be able to come out of halftime with more fire against the Quakers.

“As a unit, defensively, we just know that was unacceptable. We’ve looked to finish out games,” he said. “Especially when we have a lead, we want to make sure that we play to the end of the whistle in the fourth quarter and not let [up] some late scores.”

For Harvard to come away with a victory against Penn, it will have to contend with a balanced offense that mixes speed with size and youth with veteran savvy. The star of the Quakers’ offense is a graduate student, running back Isaiah Malcome, who, despite standing just 5’5”, broke out for 201 yards and a touchdown against Lehigh on Oct. 9. Overall, Malcome has gained 642 yards on the ground this season, which ranks third in the Ivy League behind Columbia’s Dante Miller and Shampklin, in addition to five scores.

“He’s a tremendous athlete. He’s got amazing quickness. He’s a shifty kid, can get east and west very well, and then, when he has to, get north and south,” Irwin said. “It’s going to be a challenge, and it’s going to take the whole defense to bring him down. We pride ourselves on getting everyone to the football, so it’s not just going to be one-on-one. It’s going to be all eleven Crimson coming after him.”

Penn balances its undersized running back with a large receiving corps, with three wide receivers standing over six feet tall. Although senior receiver Ryan Cragun did not play in Penn’s loss last week to Cornell, the Quakers possess the size to threaten Harvard’s defensive backs, who allowed 5’9” Princeton receiver Jacob Bermelin to high-point the football for the game-winning conversion in an 18-16 5OT loss. Penn’s leading receiver this season is Cragun, who has hauled in 31 catches for 463 yards and two touchdowns. It also mixes its veteran leaders with a first-year quarterback, Aidan Sayin, who took over for senior John Quinnelly after the upperclassman completed just 24 percent of his passes in a loss to Columbia on Oct. 16. Sayin’s best game came against Brown on Oct. 30, when he completed 68.8 percent of his passes for 97 yards and two touchdowns in the 45-17 Quaker victory.

“He’s a very talented young player, and he’s going to be a great Ivy League quarterback in the years to come. I think he’s got great arm strength. He’s a decent athlete,” Irwin commented on Sayin. “For us, it’s going to be getting after him, using our veterans to try and outsmart him a little bit, but he’s a great player and it’ll be a challenge playing against him.”

On Saturday, however, Sayin and Malcome will face their most difficult opponent yet. Aided by its strong front seven, the Crimson rushing defense is the best in the country, allowing just 55.5 yards per game and 1.75 yards per carry. Additionally, Harvard allows among the fewest conversions on third down, fourth down, and in the red zone, ranking third, third, and fifth, respectively. Because of its strength in clutch situations, Harvard has allowed just 130 first downs in its eight games, the fifth fewest in FCS.

“I think it starts with the game plan with [defensive coordinator Scott Larkee ’99] and the rest of the defensive coaches. They put us in a great situation,” Irwin explained. “First and second down matter just as much as third and fourth down. So if we stop them for minimal yards on first and second down, it makes third and fourth down a lot easier.”

The Crimson relies on the strength of its defensive line, which has gotten through for 33 sacks this season, good for second-most in the country. It is led by junior defensive lineman Jacob Sykes, who has racked up seven sacks, sophomore defensive lineman Nate Leskovec, who has contributed 5.5 of his own, and Griffith. Griffith, who was named to the 2021 Stats Perform FCS Jerry Rice Award Watch List on Oct. 27, putting him on the national stage as one of the best first-year players in the country, has brought down the quarterback four times and has 7.5 tackles for a loss. The Portsmouth, N.H., native is supplemented by talented linebackers like Hill and Irwin and a secondary that has intercepted 11 passes this season, good for a tie for thirteenth nationally. 6’2” sophomore cornerback Alex Washington, who intercepted two passes against Lafayette on Oct. 16, and 6’0” senior cornerback Khalid Thomas, who snagged two of his own against Holy Cross on Oct. 2, give Harvard plenty of size to combat the Quakers’ trio of receivers.

On the other side of the ball, head coach Tim Murphy will present a relatively unfamiliar look. After sophomore quarterback Charlie Dean was lost for the season with an injury after the Princeton loss and senior quarterback Jake Smith was benched, Murphy turned to Emge, who, in his first career start, helped the Crimson execute its most aggressive offensive game plan this season last Saturday against Columbia. Emge repeatedly threw downfield, finding Wimberly seven times for 111 yards, including a touchdown. The junior is Harvard’s leading receiver this season, having caught 29 passes for 357 yards and three scores. Senior wide receiver James Batch was also the beneficiary of two deep throws, one by Emge and one by sophomore wide receiver Gavin Sharkey on a trick play.

“[Wimberly and I] have a great chemistry, and I think that same chemistry is something that is had between me and all of the receivers, and same with our other quarterbacks and receivers,” Emge said. “I think that comes from spring ball [and] in the summer, throwing with these guys up here, it’s just a lot of reps together. … Our quarterback room and our receiver room, as a whole, just has really great chemistry. I think we’re able to build on that on game day and lean on that.”

The Crimson offense, however, is led by its running backs, who each ran for nearly 100 yards and two touchdowns against Columbia. Shampklin leads the Ivy League with 94.1 rushing yards per game, and ties Princeton’s Collin Eaddy with 10 total touchdowns. Meanwhile, Borguet is not far behind, having rushed for 530 yards and seven touchdowns this season. Together, the pair helps Harvard boast the 31st best rushing attack in the country, averaging 173.4 yards per game to pace the defense-oriented Ancient Eight.

“We have an extremely talented running back room, whether it’s [Shampklin], [Borguet], [sophomore running back Sone Ntoh], really talented young guys too. It really just takes a lot of pressure off the quarterback, when you know you can hand it off to those guys and they’ll get you five, six, seven yards a pop,” Emge said. “I think a lot of it also comes down to our [offensive line]. Our o-line has done a great job this year, opening up holes for them and protecting the quarterback.”

Led by senior offensive lineman Spencer Rolland, a projected All-Ivy League First Team selection, the unit will have to come prepared against a Penn defense that plays aggressively. Although the Quakers were unable to manufacture a sack last Saturday against Cornell, they have totaled 21 sacks this season, good for fifth in the Ivy League. Their frequent blitzes have allowed them to concede just 140 first downs this season, tied for the 12th fewest in the country. Linebacker Jake Heimlicher has contributed six sacks, defensive back Jaden Key and linebacker Brian O’Neill each have 51 tackles, and defensive back Jalen McCleod has three picks to pace the team.

“They have players with high motors. They get after it [and] fly to the ball. They take a lot of pride in their defense,” Emge said. “Their defense as a whole is extremely talented. Talented [defensive backs], front seven, specifically their down linemen, are really talented. Every week, I think the big focus for us as a team is focusing on what we can control and preparing ourselves as [well] as possible to execute our offense.”

A Harvard victory on Saturday would improve its record in the rivalry to 50-39-2 (.560) and give it a 4-2 conference record headed into the 137th playing of The Game in New Haven, Conn., on Nov. 20. The Crimson currently sit just one game behind Princeton, Dartmouth, and Yale, although the Bulldogs play the Tigers this weekend in Princeton, N.J. If Princeton and Dartmouth each lose a game and Harvard wins each of its remaining two games, the Crimson is guaranteed a share of the conference title, which would be Murphy’s tenth since taking over as head coach in 1994. After the Yale contest, the Tigers will finish out their season on the road against Penn. The Big Green, meanwhile, will face Cornell before traveling to Providence, R.I., for its finale against Brown. However, as they have all season, Harvard players are taking it one game at a time.

“[You] can’t focus on the past and you can’t dream about the future,” Irwin said. “All you can control is the present, so we’re going to go 1-0 this week and then see what happens.”