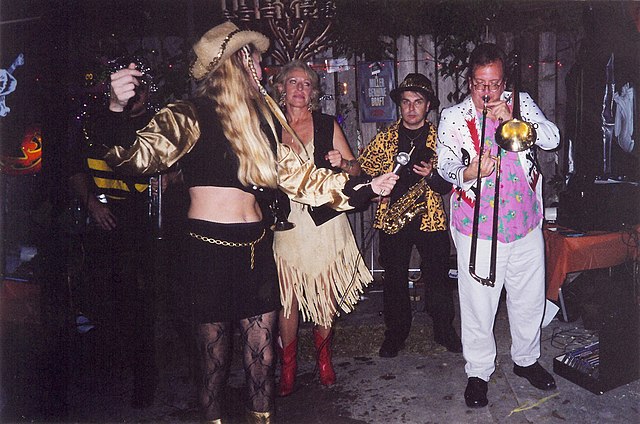 The weather is getting colder. Fake skeletons, pumpkin patch Instagram photos, and Spirit Halloween stores have started popping up everywhere. It’s clear that fall is here, and what better way to embrace it than with an expertly-curated playlist? Read on for ten songs that are perfect for getting into a Halloween mood.

“This Is Halloween” by Danny Elfman (from “The Nightmare Before Christmas”)

Starting with a classic, the opening song of Tim Burton’s “The Nightmare Before Christmas” is perfectly creepy. In the movie, “This Is Halloween” serves to introduce the perpetually frightening Halloweentown and its residents, including Jack Skellington, the Pumpkin King.

This is an ’80s rock song that pays homage to the horror TV show “The Twilight Zone.” Its upbeat tune and eerie lyrics are a great way to get a room of people into the Halloween spirit. When you listen to this song, you’ll feel like you’re stepping into the Twilight Zone.

“Walking On Air” by Kerli

Inspired by scary children’s stories of the “In a Dark, Dark Room” variety, “Walking On Air” is a little, creepy song about a little, creepy girl. This song would have been on my playlist in middle school, and even a decade later, it still holds up as a quirky, atmospheric Halloween song.

“The Fine Art of Poisoning” by Jill Tracy

This one is frightening to the extreme. In the song, the narrator describes the various ways to poison an enemy and gloats about getting away with it. With a haunting voice, Jill Tracy sings, “Misfortune will flow / But who will know?” Play this one during a dinner party for added effect.

“Mx. Sinister” by I DONT KNOW HOW BUT THEY FOUND ME

iDKHOW’s “Mx. Sinister” is about a stalker obsessed with making their victim fall in love with them. In this creepy and vaguely disturbing (but gender-inclusive!) song, lead vocalist Dallon Weekes sings, “I’ve got to make you mine / Just know I’m not the sinister type.”

Skeleton memes aside, you cannot deny that this song is a perfect Halloween tune. Specifically, the remix — as opposed to the original song — is on this list because of its increased danceability and fabulous beat drop. And while over half of the words are either “spooky,” “scary,” or “skeletons,” what else do you really need on Halloween?

If you’re trying to refine your Spotify Unwrapped at the last minute while simultaneously enjoying the spirit of the fall season, this is the song to play on repeat. While not exactly about the holiday itself — it’s about a couple trying to pretend they don’t have problems — the song technically takes place on Halloween. And hey, dying relationships can be scary too!

Speaking of Halloween songs that aren’t actually about Halloween, Rihanna’s “Disturbia” always seems to get placed in the “Halloween” category despite never mentioning the holiday during the song. Still, the imagery of “a thief in the night to come and grab you,” along with the song’s generally disturbing sound, makes this a Halloween staple.

K-pop girl group Red Velvet’s best song was released alongside a horror-inspired music video in which the five members lure an unwitting pizza boy into their house to be killed. The whole song has a mysterious aura, with an addictive “peek-a-peek-a-boo” hook that will get stuck in your head.

This is the quintessential Halloween song. You cannot go to a Halloween party without this song playing at least once. This instantly recognizable song has everything — a dancing mad scientist, ghostly sound effects, and a band of coffin-bangers called the Crypt-Kickers. It is, indeed, a graveyard smash.