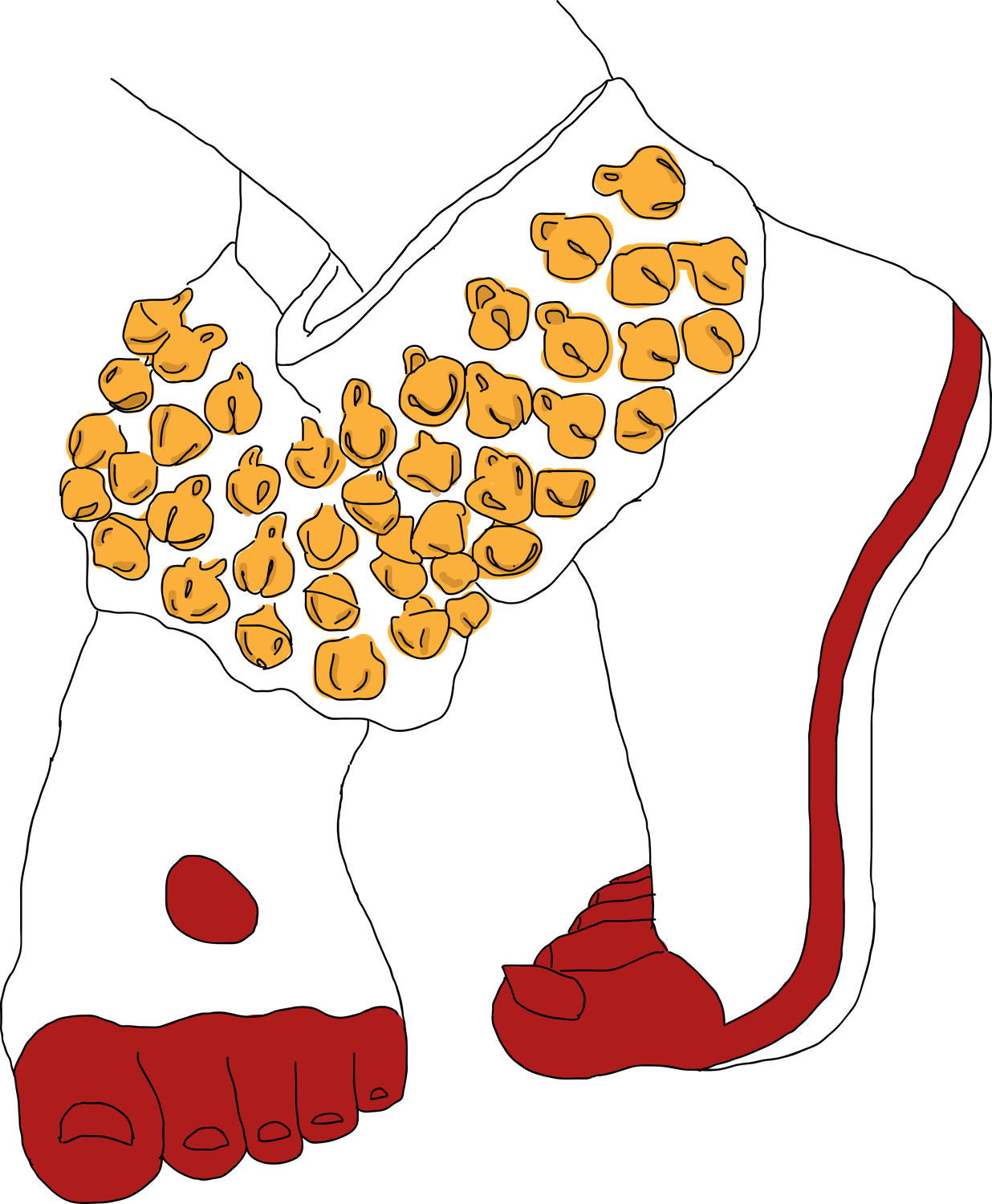 What Cannot Be Said in English

My salangai, red anklets with three rows of bells, chimed through our apartment as I danced Bharatanatyam, anIndian classical dance. Nearly every day for the past 16 years, I practiced rhythmic tattu mettus until my feet became calloused and our downstairs neighbors filed a complaint about the “incessant basketball thumping.”
By Akila V. Muthukumar

My salangai, red anklets with three rows of bells, chimed through our apartment as I danced Bharatanatyam, anIndian classical dance. Nearly every day for the past 16 years, I practiced rhythmic tattu mettus until my feet became calloused and our downstairs neighbors filed a complaint about the “incessant basketball thumping.”

As my dance classes intensified, we rented a garage a short walk from our apartment building. Through most of high school, I carried a fan to this makeshift studio and practiced with the door slightly ajar until the moon crept out or I began to feel bug bites on my sticky arms.

During these long nights, I learned Nee Manam Irangi Varuvai, the only varnam — a type of Carnatic musical composition — that my dance teacher taught in pure Tamil, my native tongue.

I was born in India and raised speaking only Tamil for the first five years of my life, so when I moved to the suburbs of Dallas, I was placed into the English as a Second Language program at my elementary school. I was shy — not in an endearing way, but a concerning one. One of my teachers asked my parents if I had a speech or language disorder when I still rarely spoke up at the age of seven.

In reality, I was just at a loss for English words. During show-and-tell, my classmates shot ugly glares at me when I couldn’t respond to their electronic gadgets and colorful toys. When it was my turn, I held up a battered stuffed dog my aya, maternal grandmother, had given me.

“This is Thangam,” I began. I was interrupted by classmates calling out, “What does that mean in English?” and “Can she even speak English?”, both curious and cruel. I stopped and switched languages, thinking for a moment before mumbling, “It means ‘Gold.’” My face was flushed and I didn’t know how to continue, so I returned to my seat. I didn’t have the words to defend myself.

After that, I stopped dragging Thangam with me everywhere, and much to everyone’s relief, I learned English. My parents drove me to every library within a 30-mile radius of our home, and they began to walk out of parent-teacher conferences with beaming smiles instead of hushed whispers. With each blue summer reading challenge ribbon that went up on my wall, I lost a bit of my Tamil, until I even exchanged amma for “mom.”

Over the coming years, my mom and I bonded over 40-minute car rides from Irving to Plano for dance class. We would play 106.1, Kiss FM, and I was content to listen to the same five or six hit pop songs on repeat. I loved when I could decipher Ariana Grande’s fast-paced lyrics for my mom, for whom all the words blurred together. Even when I forgot to practice and was more excited by post-class shopping trips than the dancing itself, my parents still loved that I was learning a part of their culture. Our car rides remained a weekly tradition even after I got my own license.

As I walked into my dance studio, the bright sounds of 106.1 music were gradually replaced by the classical flute interlude playing through my teacher’s speakers. From the ages of 15 to 17, I learned the varnam Nee Manam Irangi Varuvai, which loosely translates to “You [Lord Muruga] Show Compassion and Come [to Me].” Growing up, my parents told me stories about Lord Muruga riding his peacock around the world, and I read comic books about his battles against asuras, or demons. However, I was stumped when it came to the abhinaya, or expressive portions of the dance, about his domestic life with two wives, Devasena and Valli.

How was I to showcase, even celebrate, the intimacy of an arranged marriage awarded to Devasena after years of penance? My peers at school opposed the idea of women giving up parts of their autonomy for a man. In my history textbooks, I read about arranged marriages as slippery slopes to forced marriages, rife with concerns about colorism and casteism in the South Asian community. After reading these articles and circling the big words in colorful Sharpies, I concluded this was a backwards practice.

I couldn’t adopt Devasena’s character when I disapproved of her actions. Each movement felt ridiculous, graceless, and exaggerated. I bounced on my feet, clearly distracted each time I adopted her demure stance. I angrily stumbled through the mudras, or hand gestures, that showcased Lord Muruga with his two consorts.

In these moments where I could not change how confused I felt, I listened to the varnam on repeat. The language that I had tried so hard to replace with English came back. I began to love how the dancer, the devotee, addresses Lord Muruga with nee, a colloquial “you” that would normally only be used among friends, instead of the more formal neengal that I use to address strangers, parents, or elders. I felt each nee sink through layers of practice saris and align perfectly with the chimes of my salangai. Nee was a sign of intimacy that I could understand.

I tried to lose myself in the Tamil words themselves, instead of ascribing my American judgement to the story. The song uses “mayangi, tedi, alainda” to describe how the devotee was “fainting, searching, and wandering” before Lord Muruga appeared before her, but the literal translation with three gerunds doesn’t do justice to the tense of Tamil verb forms and to the song’s meaning. Rather than simply seeking, in Tamil, the heroine is searching with desperation and weariness.

I’m sure linguistic scholars could analyze what is lost in translation with far more precision than I could, but just understanding that “mayangi, tedi, alainda” had no English equivalents was liberating. I stopped thinking I had to dance in a way that made sense to my peers. I started to hear and imagine a stand-alone storyline in Tamil without substituting English into every turn of the narrative.

The marriage became exciting because each time I performed, I could give Devasena the stage I wished she had. I rotated my wrists in a lasso motion and stood with my feet in a wide squat to portray Devasena’s life as a huntress; then, I allowed myself to fold inwards to depict how she covered her face with a soft veil when accompanying Lord Muruga.

Enacting the love story gave me room to negotiate with myself. I could believe in liberation for women while also cherishing traditions of familial connection through marriage. I could recognize the structural inequalities associated with arranged marriage in contemporary South Asia while appreciating the mythological story of two divine forces developing an inseparable tie over time. Why should a union governed by astrological whim be any different than one governed by human fancy or algorithmic chance?

Dancing as the devotee and as Devasena gave me a stage to subvert society’s unjust assumptions about my heritage and to simply focus on the beautiful Tamil nee each time I addressed Lord Muruga onstage. I crowded around other girls from dance class, singing along to Kiss FM’s hit singles in our dressing room before going onstage to portray wives who travel the universe for their husbands. I danced in my open garage despite curious stares from passersby.

In doing so, I learned all the things that cannot be said in English.

— Staff writer Akila V. Muthukumar can be reached at akila.muthukumar@thecrimson.com.