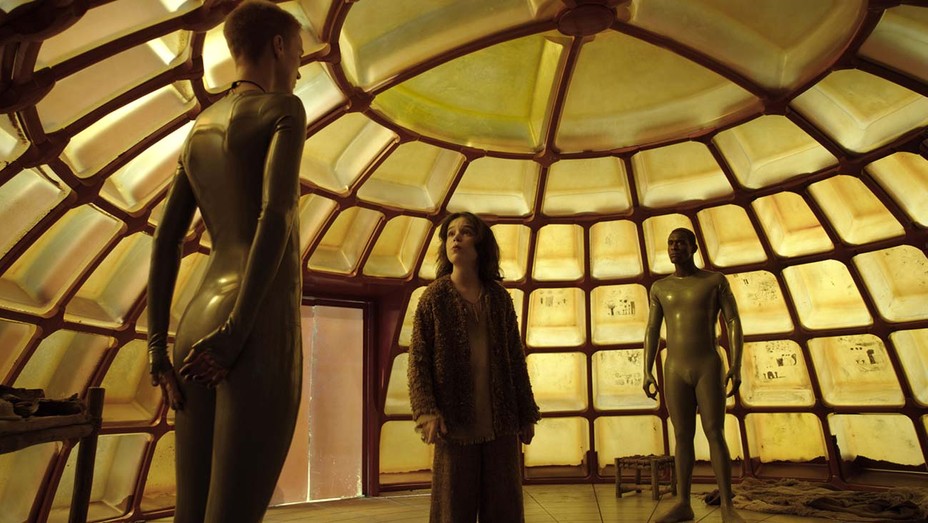 Amanda Collin as Mother, Winta McGrath as Campion, and Abubakar Salim as Father in "Raised by Wolves." By Courtesy of HBO
By Harper R. Oreck, Crimson Staff Writer

Before there was “Raised by Wolves,” there was Ridley Scott’s “Prometheus.” Of course, before “Prometheus,” there was “Alien,” the seminal body-horror thriller in which the iconic Ripley (Sigourney Weaver) and a group of unlucky astronauts face off against bloodthirsty extraterrestrials. The extensive “Alien” cinematic universe, unfolding through decades of filmmaking, focuses on the conflict between humans, the aforementioned evil aliens, and Engineers (technologically advanced ancestors of humans), tracing the downfall of humanity to the battle between species. Yet with “Raised by Wolves,” Scott and his contemporaries put forth a new, fresh vision of a future in space — one which continues to probe questions of ethics, religion, artificial intelligence, and survival in nuanced ways but departs from Scott’s highly influential space franchise.

From its first episode, “Raised by Wolves” is bizarre, stark, and engaging, with cold visuals reminiscent of “Westworld” and spacecraft-espionage intrigue recalling “Battlestar Galactica.” The show opens on two anthropomorphic androids — aptly named Mother and Father — who are sent with six human embryos to a hostile planewhere they are supposed to start a human colony and birth a new society. It is tough, painful going for Mother, Father, and their children, who are not left alone in the new landscape for long. As the story unfolds and they fight to survive, we see they are still affected by the religious civil war which tore Earth apart. As the conflict lands on the new planet, the show interrogates the way we understand, talk about, and spread religions, presenting an existential conflict between a restrictive but mostly humane religious sect and the cutthroat, calculating atheist androids.

Of course, while the show delves into deep philosophical questions, it’s also just a roller-coaster ride of wild technology, terrifying robots, reimaginings of genre tropes, and ridiculous sci-fi costumes. Plus there are people falling into terrifying geothermal holes, a pair of all-powerful eyes that are kept in a bag, cool plastic surgery robots, and captivating performances by Amanda Collin (Mother) and Abubakar Salim (Father.) It’s “Alien” meets “Westworld” meets “Battlestar Galactica,” with a hint of “Game of Thrones” — not great for a mindless binge-watch, but perfect escapism, cerebral and fantastic in equal measure.

“Raised by Wolves,” created by Aaron Guzikowski with Scott attached as an executive producer and director of several episodes, premiered on Sept. 3. on HBO Max. The show seems to have benefitted from word-of-mouth hype on a wider scale, as its ratings climbed throughout its first season. Despite this success, the show still seems to be mostly missing from conversations about the year’s best and most interesting TV— from its absence in yearly rankings to minimal media commentary and zero Golden Globe nominations. Yet “Raised by Wolves” offers nuanced, useful explorations of social issues and conflicts, and deserves recognition for the innovative work it’s doing to examine human nature through a novel sci-fi premise.

Season One of “Raised by Wolves” is available on HBO Max. The “Hidden Gems” series features Crimson Arts writers weighing in on their favorite under-rated shows and why they’re worth checking out.

— Staff writer Harper R. Oreck can be reached at Harper.Oreck@thecrimson.com