‘I am once again asking’: The Adoring Memeification of Bernie Continues 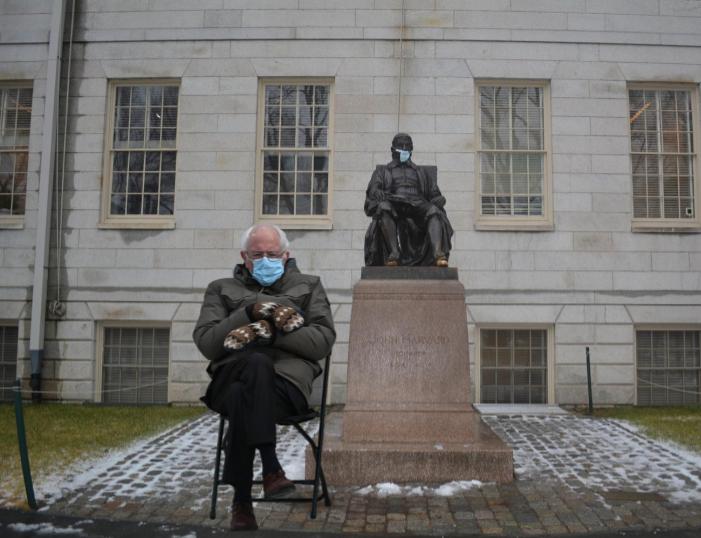 I found the Bernie meme (™) very innocuously: Instead of writing my senior thesis, I was scrolling through Twitter. This discovery happened very early in the meme saga — what one might call the before times. The memes had not yet been made: All I saw was Bernie Sanders sitting in a hunched-over, pensive position (he really might be “The Thinker” of our century), right leg crossed over the left, brown knitted mittens matching his shoes (worn at the soles, of course) and contrasting enough to chromatically fit with his jacket. This jacket seems to appear in another Bernie meme, the one in which he is “once again asking.” There were some tweets contrasting Bernie Sanders and Janet Yellen, who had also dressed for the weather, but — of course — it was Bernie who stole the show. Soon another photo of him with a manila folder suggesting a lengthy to-do list appeared, sealing the deal. That photo did not get meme-ified, but it did provoke laughs, commentary, and burning ardor for the Vermont senator.

Today, the subject at hand is not universal health care, but rather Bernie and his uncanny ability to become a meme in addition to unpacking why this phenomenon exists in the first place. In the two formats already mentioned, his posture is iconic and easily manipulable, as is the text accompanying the first one. “I am once again asking for your financial support” can be co-opted by college students bemoaning the existence of Zoom breakout rooms (they’re awful), people asking for love, or literally anyone thinking about the dumpster fire that was 2020.

But Bernie in the chair at the inauguration blew any past memes out of the water, spawning endless tweets that have slowed to a trickle, but, crucially, have not stopped. The posture, the jacket, the mask slightly askew — we’re visual creatures, and it’s impossible to not feel how he feels while sitting there in the cold at a distance from everyone else in Washington, D.C.

Of course, if any other political figure had made this pose, the resulting image would not have become a meme. Bernie’s status as a politician, figurehead, and icon is key; for millions of people, he is a champion of human rights in a country that all too often denies people dignity, financial recourse, and the much-vaunted “life, liberty, and the pursuit of happiness.” Bernie wants to finance direct payments to alleviate the crisis stemming from Covid-19 — and wants to do it now. He has donated the funds from the merchandise branded with this very meme to Vermont charities, and is pushing to raise the federal minimum wage. All this comes in addition to his years-long fight for universal health care — a fight made even more urgent by the ongoing public health crisis (I’m sure you’ve heard of it?).

Many people feel that Bernie sees them and their struggles, and, moreover, does things in the senate to alleviate their suffering. The ardor for Bernie is real — it is not a stretch to say that these memes were made in some kind of homage to him and his genuinely-felt efforts to help the American people.

There are many ways to celebrate cultural figures, but in the internet age, memes reign supreme. Why? They combine the visual with the textual, if text is even needed, to convey an emotion that immediately feels universal to many or is otherwise relatable. They’re comic relief, though many are dark. Yet they instantly and clearly communicate what animates and preoccupies us, poking fun at or elevating the subject. Bernie fits into this online culture because of his tirelessness, his honesty, and his passion for the causes that matter to him. These causes, should they come to pass, would help millions — and the people watching him and participating in the creation and amplification of memes know this. Politics aside, however, Bernie — especially in the latest inauguration meme — is relatable, and the endless spinoffs only augment the relatability of his posture. Sitting in a chair, hunched over: The effect is priceless. I myself have bookmarked many iterations on Twitter. It’s important to keep records.