‘In & Of Itself’ Review: Derek DelGaudio Casts a Cathartic Spell on His Audience 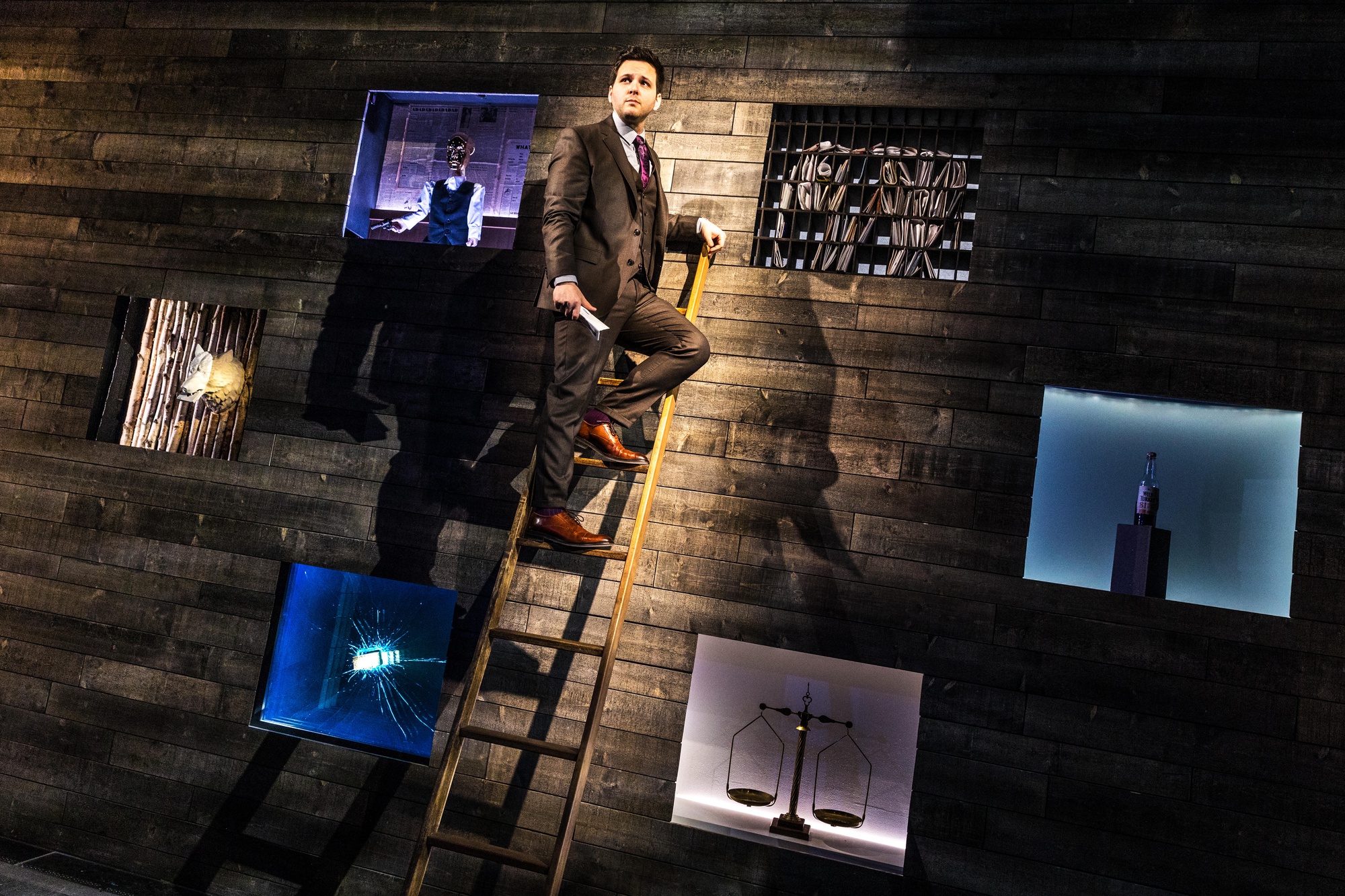 Derek DelGaudio takes his introspective magic show "In & Of Itself" (2020) from off-Broadway to Hulu.
By Samantha J. O'Connell, Crimson Staff Writer

Magicians are known for their uncanny ability to trick the mind, pulling off elaborate illusions whose mechanics remain an enticing mystery to the audience. They are decidedly not well known, however, for eliciting tears from their spectators or leaving them with deep existential questions about the nature of truth. And yet Derek DelGaudio, the storytelling mastermind behind the off-Broadway production “In & Of Itself,” now streaming on Hulu, managed to pull off all of the above.

In a performance that is part magic show, part confessional monologue, and part interactive theater, DelGaudio manages to cast an addictive spell on all audience members, both in-person and virtual. The sheer force of his stage presence, equally charismatic and vulnerable, takes the often disparate and ambiguous elements of the show and transforms them into a surreal, hypnotic, and ultimately satisfying quest into the query: “Who am I?”

After running from May 2016 to August 2018 onstage in New York City, “Derek DelGaudio’s In & Of Itself” has reemerged in streaming form. Frank Oz, the director of the original stage production, returned to create the film version on Hulu, featuring recordings directly from the original performances as well as home video footage from DelGaudio’s childhood and compelling animations to accompany his lengthy storytelling. A beloved entertainer himself, known for his puppeteering on “The Muppets,” Oz told Rolling Stone that both he and DelGaudio “like to break things, to break form.” That certainly holds true for “In & Of Itself,” a show that seems to defy standard classifications. Delving into deeply personal anecdotes from his life, each represented by an alcove on the wall behind him, DelGaudio transcends the wow factor of a traditional magic show and infuses the production with daunting philosophical questions. The visual stunts still elicit gasps and quicken pulses, but these magic tricks serve a higher purpose of establishing authentic emotional connections with the audience and encouraging genuine introspection.

DelGaudio demonstrates his extreme prowess as an illusionist early on in the show, performing a relentless stream of card tricks with a nimbleness that is exhilarating to behold. As he recounts his lifelong passion for prestidigitation, there seems to be no feat he can’t pull off with that handy deck of cards — no shuffle he can’t complete seamlessly, no specific suit and number he can’t magically summon from the pile, no sleight-of-hand scheme he can’t pull off on a casino table.

Even more impressive and more difficult to decipher, though, is the emotional magic DelGaudio seems to enact on his captive audience members as they become increasingly active participants in the performance. It is the type of spellbinding effect generated only through intimate storytelling and artistic originality, a magic trick that even Val Valentino, the infamous “Masked Magician,” could never successfully explain to his TV fan base. Each night, as the audience begins to file into the theater, they are asked to choose from an array of 690 cards mounted on the wall, each with the phrase “I am” followed by some one-word label, whether funny (“I am the life of the party”), professional (“I am a teacher”), or deeply serious (“I am an accident”). That decision is just the tip of the iceberg when it comes to audience participation, the secret ingredient that makes “In & Of Itself” so fascinating and unique in the world of magic and one-man plays.

While original viewers of the NYC staging only saw one version of the play, Oz has given his Hulu audience compilations of volunteers from many different nights, showcasing the infinite variations these interactive moments can generate. DelGaudio’s direct exchanges with the audience remain a source of joy, grief, and creativity throughout the performance, but it would be a shame to list them all out here and ruin the surprise: better to keep it a mystery for those who have yet to experience the astonishing show for themselves.

There is no doubt that, for the most part, Oz allows DelGaudio’s original masterpiece to shine through, recognizing that less is more when it comes to editing such a mind-melting show. That said, in an era where such intimate, live theater cannot exist safely, this recording of “In & Of Itself” is bound to strike any avid theatergoer as a painful reminder of all that has been lost in the performing arts since March 2020.

Nowhere is that bittersweetness more apparent than during the grand finale, when DelGaudio, now seemingly omniscient, turns to each individual audience member and announces out loud exactly which “I am” card they selected at the start of the show, causing many to instantly burst into tears. Despite the visible emotion, it is apparent that the electricity generated in that small, dark theater by a crowd of mesmerized people is nearly impossible to translate to a computer screen, as the choppy cinematography kills some of the scene’s momentum.

Trying to describe the ultimate meaning of the show is quite futile, a fact made even more evident by the frustratingly vague Hulu synopsis: “It tells the story of a man fighting to see through the illusion of his own identity, only to discover that identity itself is an illusion.” Perhaps one of the work’s greatest achievements, then, is its ability to interrogate the broad, easily clichéd theme of identity while never inducing eye rolls. Beyond forcing viewers to confront the simplistic labels society assigns them, the show serves as a powerful reminder that each individual you pass on the street has an inner world as complex as your own with struggles just as exhausting, an especially important message at a time when it is all too easy to feel completely isolated and alone.