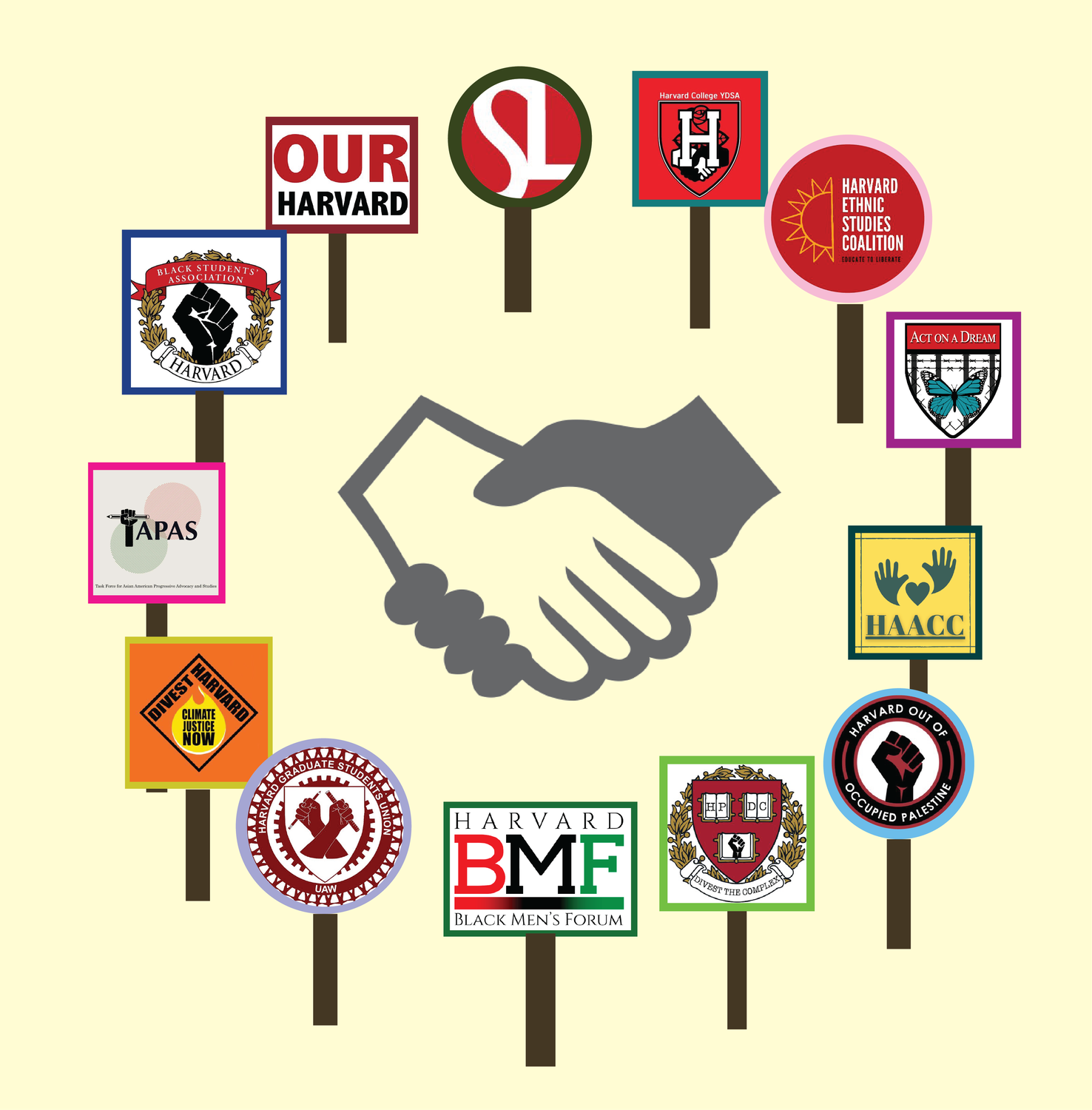 At least 13 student organizations have come together to form the Racial Justice Coalition, which organizers say will boost collective efforts to advocate for change. By Yuen Ting Chow
By Audrey M. Apollon and Leah J. Teichholtz, Crimson Staff Writers

At least 13 Harvard student organizations launched a coalition this week aimed at fostering collaboration between undergraduate and graduate student organizers to advocate for racial justice initiatives on campus and demand action from Harvard administrators.

Ericka “Ricky” R. Sanchez, a member of the Harvard Graduate Students Union-United Automobile Workers and a Ph.D. candidate in English, said demands for anti-racist action across many student groups following the murder of George Floyd last year sparked the idea for a broader coalition.

“We, as a union, believe very strongly in collective power,” Sanchez said. “We just wanted to come together as a space, and from there we just started reaching out to folks that we were aware of and trying to spread out the network.”

At its inaugural meeting on Sunday, the Racial Justice Coalition discussed the effectiveness of different protest strategies.

Though each group in the Coalition will retain its individual goals and demands, organizers said they believe their collective power will provide leverage to achieve racial justice at Harvard.

Jade O. Woods ’22, a member of Fossil Fuel Divest Harvard, said the aims of the different groups represented in the Coalition are “intertwined” and “connected.”

“We are demanding that the University disclose, divest, and reinvest from the fossil fuel industry,” Woods said. “But in addition to that, we’re also an environmental justice campaign, and so we believe that climate justice is super intertwined with racial justice and in ending the prison industrial complex.”

While the group has not yet outlined its formal demands, Azani A. Creeks — a student at the Divinity School and an organizer for the Harvard Prison Divestment Campaign — said future demands will include holding the University accountable to its anti-racist commitments.

“We want to take Harvard to task and hold them accountable for their own commitments to racial justice that they have said they’re committed to, and we just actually want to see some kind of meaningful change,” Creeks said.

Chloe Koulefianou ’23, the political action chair of the Black Students Association, said the group decided to join the Racial Justice Coalition to mobilize with other organizations in support of Professor Cornel R. West ’74. In February, West said that he was denied a request for tenure consideration and he has since announced his departure from the University.

“We came to the decision that it would be better to combine our efforts in this situation,” Koulefianou said. “Some of the graduate students put together the Coalition for Racial Justice specifically for situations like this in the future, where we would need to mobilize quickly and involve a lot of people.”

Woods said she was “heartbroken and outraged” by West’s tenure feud and added that it was just one example of the University demonstrating the “lack of commitment to racial justice.” Woods also cited the lack of an ethnic studies department and multicultural center, two longtime student demends.

“There are a lot of critiques that can be leveled at Harvard,” Woods said. “That’s not to say that it doesn’t also do good in the world, but there are definitely things that can be changed.”

Harvard spokesperson Jason A. Newton declined to comment on the formation of the Racial Justice Coalition and organizers’ criticisms of the University.

Sanchez said that, in its nascent stages, the Coalition must become a “centralized” platform for student activism groups before churning out specific demands.

“I am very excited for the sort of creative ways that we’re going to be able to position those demands and make sure that those demands are put into place,” she said.