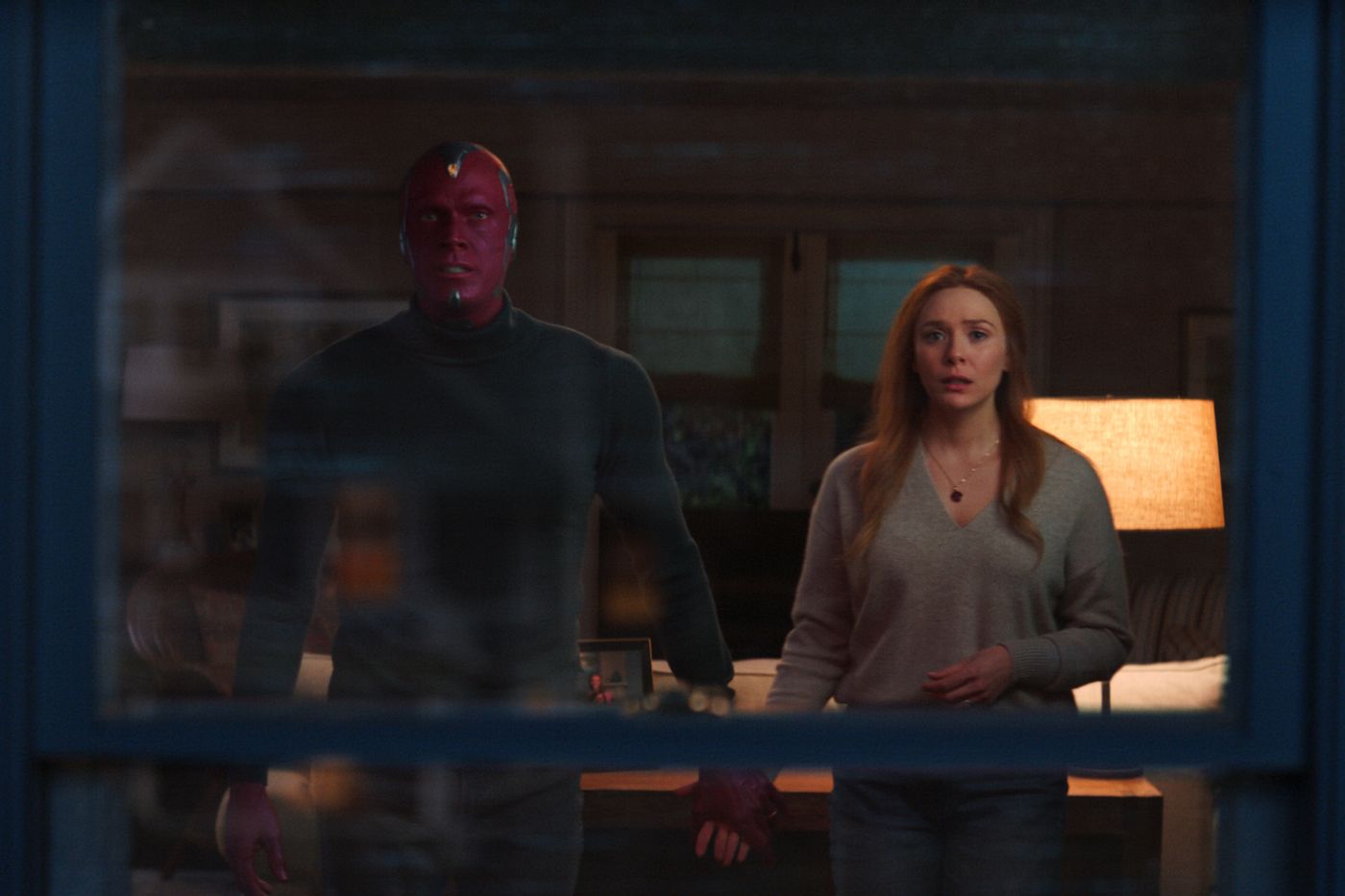 Paul Bettany as Vision and Elizabeth Olsen as Wanda in "WandaVision." By Courtesy of Marvel Studios
By Millie Mae Healy, Crimson Staff Writer

“WandaVision” came to an end on March 5 in an action-packed, forty minute episode aptly titled “The Series Finale.” Although nothing particularly surprising happened, all of the plotlines were neatly tied up while still leaving room for Marvel to return to the franchise.

The episode picks up right where the last left off, with Agatha (Kathryn Hahn) facing off with Wanda (Elizabeth Olsen) in an impressively VFX-heavy prolonged fight scene, a testament to the feature-film-level budget granted to this TV series.

As the episode cuts to Monica Rambeau (Teyonah Parris) being held captive, one of the last of the mysteries of “WandaVision” finally gets cleared up. The appearance of Evan Peters as Pietro Maximoff was met with massive fan reactions, as Peters plays Peter Maximoff, Pietro’s equivalent in the X-Men movies. Unfortunately, his appearance was not the introduction of the X-Men into the Marvel Cinematic Universe that many were hoping for. As cool as the alternate universe crossover of Wanda’s brother showing up could have been, this outcome was pretty forgone, since something as major as the merging of the MCU Superhero and X-Men universes seems unlikely to happen through the backdoor of a TV series.

When Agatha frees the citizens of Westview from Wanda’s control, they surround her — eager to get revenge for being mind-controlled. This could have been a great moment, one that would force Wanda to confront the harm her grieving inflicted. Unfortunately, after a moment of horror from Wanda, she sets them all free and the moment falls to the wayside. After a quick and fun homage to “The Incredibles” where the Maximoff family action poses together, everyone splits off again and the episode loses focus on the characters in favor of elaborate shots and the non-stop action Marvel is known for.

In a brief reprieve from the action, Vision and Spectral Vision debate the Ship of Theseus thought experiment in a move that solidifies how Paul Bettany has had one of the weirdest careers ever through the MCU: going from recording audio clips as J.A.R.V.I.S. for the first "Iron Man,"to becoming a full-fledged Avenger in “Avengers: Age of Ultron,” to now starring in his own show. And luckily for him, the appearance of yet another Vision suggests he isn’t likely to lose his job soon.

In the sky, Wanda uses the same runes Agatha used to stop Wanda from using her powers in the prior episode in a move that’s emblematic of the finale: Wanda’s final battle-winning move is a nice moment and a rewarding payoff from a detail placed earlier in the season, but it’s unsurprising and underwhelming. Agatha’s comeuppance is fitting — she is turned into Agnes, the personality she adopted when inside of Wanda’s sitcom — and also quite a convenient way to store a villain for future reboots.

Next, the scene everyone knew was coming: Wanda’s goodbye to her family. They weren’t real (or they were real because Wanda loved them, or something in between) but Wanda still must release them from her spell. This wrap-up is thoroughly predictable, but still suitably tender and heartfelt. It does wrap up “WandaVision”’s themes of grief and love nicely as Wanda returns to the real world, heartbroken at the loss of her family but appreciative of the love that she shared with them. Vision put it best: “What is grief if not love persevering?”

In true Marvel fashion, however, the end was not the end. In a mid-credits scene, “WandaVision” hints that Monica Rambeau is likely to return. And in a post-credit scene, Wanda’s sons Billy and Tommy call out to her. This once again references the idea of the multiverse that Scarlet Witch is deeply connected to in the comics, as well as hinting at the upcoming Scarlet Witch appearance in “Doctor Strange in the Multiverse of Madness.”

It also poses a complicated question for Marvel: Will they require moviegoers to be familiar with the TV series, spoil the show’s ending to catch viewers up, or vaguely side-step their existence? Wanda’s development in this series is now integral to her character, her powers and her perception in the public — failing to acknowledge this in a future movie would be a disservice to her character, though Marvel has been known to arbitrarily retcon and abandon arcs in the past (for example, most of “Avengers: Age of Ultron”).

As “WandaVision” shifted to forty minute episodes, the sitcom pastiches faded into the background. While the show was undoubtedly strongest when it played with those expectations, “The Series Finale” was a satisfactory ending to the lovely journey between Wanda and Vision, and a great first entry in the MCU’s TV lineup.