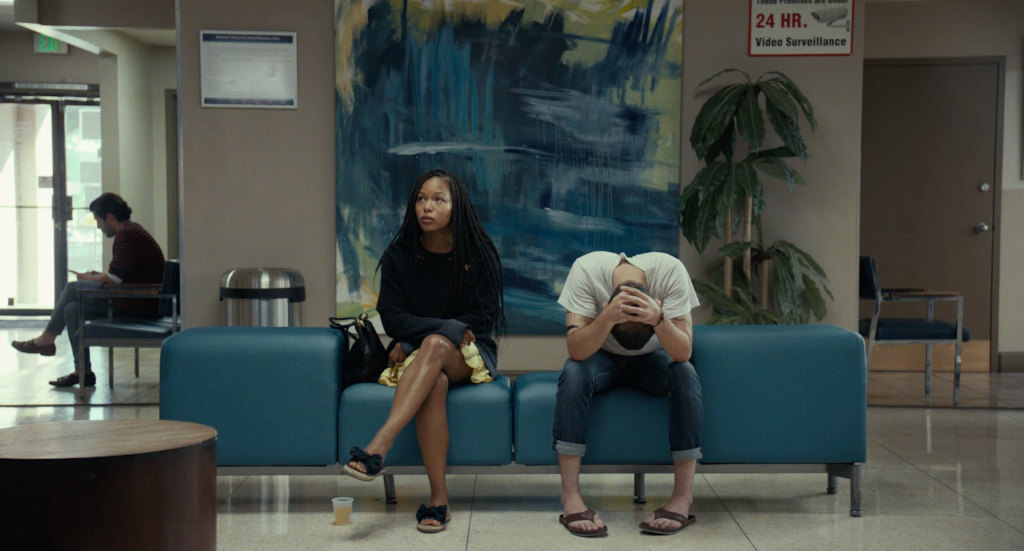 Robert Ouyang Rusli is an Asian American musician and film composer. They scored Shatara Michelle Ford’s meditative, haunting debut film “Test Pattern,” which is available for rent now in Kino Lorber virtual cinemas. The film focuses on Renesha and Evan, a mixed-race couple in Austin, Texas; in the wake of Renesha’s sexual assault, the couple runs up against the misogynoir at the foundation of the U.S. healthcare system. The Harvard Crimson spoke to Rusli about their scoring process and craft. The full score is available to stream and purchase on Bandcamp.

The Harvard Crimson: Congratulations on “Test Pattern” finally being out. It's a beautiful film, and this score is stirring.

Robert Ouyang Rusli: Thank you. It was finished in late 2018 or early 2019, [and] reached the right people [at distributor Kino Lorber].

THC: Can you talk about your collaborative process with director Shatara Michelle Ford?

ROR: I met Shatara through a mutual friend, Maegan Houang, who’s also an incredible filmmaker. We all met in LA, and the whole sound team watched the film together and had a spotting session. A lot of the time [in film] I don't even know what the sound design is going to be, so this was really nice. A lot of films I work on, it's very much over the Internet collaboration where I'm sending different cues, then Shatara will take a look and we'll have a conversation. Working with Shatara is really easy because they are very decisive and know what they want, [so they can say] ‘this is the right direction. There's no doubting this.’

Kelsey Lu is where the string inspiration started, [and] there's certain cues that are Jonny Greenwood inspired. I read a Mica Levi interview to set a limitation on your film score palette, which is something I don't usually do. Having this restriction [scoring exclusively with a string quartet] made the creativity ooze out in different directions. [I used] techniques of flipping the bow upside down called col legno, and bouncing it on the string to create this metallic, rhythmic feeling.

THC: I wanted to ask about this beautiful moment that happens near the film’s end. After this harrowing day, it goes to this beautiful flashback where Renesha and Evan are in a backyard, and the music [“Nostalgia”] is swelling and it feels particularly warm.

ROR: We tried really hard to create themes in the music, and so at the beginning there is this theme when they meet and then have their second date in the bedroom — it's very consensual, and the music is romantic.

In the scenes where [Renesha] passes out at the club and gets taken, there's these strings that are fluttering. Those [strings] combine with this theme in that scene in the backyard, and in that context it sounds beautiful. But you also associate it with this darkness earlier. [In the last scored moment] in the film when she's alone in that tub, all you hear is these fluttering strings that just build and build. If you watch it in the theater, which is what I was intending, it's supposed to really swell and just totally overcome. I feel that's just representative of how sexual assault can linger with somebody in different ways — and I tried to do that with the theme that happens there and keeps popping up.

THC: Did you learn that [technique] from any specific composer?

ROR: I learned about storytelling and themes from musical theater. I went to school and studied orchestration and Wagner, the German composer, and he has this thing called leitmotif. He is into very specific cues for certain characters. It’s especially fun in feature films to work with, but it's kind of hard in a short film to develop a theme.

THC: Do you have composers who are currently in your ear?

ROR: My favorite score is Akira, by Geinoh Yamashirogumi. That score is truly incredible. [Also,] Mica Levi. Her score for “Under The Skin” I return to constantly for inspiration. I'm very much inspired by composers that try to be more experimental in their craft. I think Oneohtrix Point Never does really beautiful scores; for “Uncut Gems” he wrote a really beautiful score. Fatima Al Qadiri wrote the score for “Atlantics.” I did really love the “Phantom Thread” score.

THC: How do you see your practice as a film composer overlapping with your [experimental rap] work as OHYUNG?

ROR: A lot of my OHYUNG music [is] very political and challenging whiteness and being very satirical about power structures like capitalism. I was always worried earlier in my career that it would stop me from getting work, and the more that I embraced combining them I just started to get more work and started to work with more people of color. They're still separate by name because film scoring is, at the end of the day, what the director wants. I do think that directors make a score better, from understanding their film so deeply. I do think they are in conversation; a lot of my experimental rap music is very cinematic.

ROR: Shatara actually heard of my music through my OHYUNG music. They're drawn to musicians that can also write music for films who have their own sound.

THC: What is next that you are feeling anxious to work on?

ROR: I have always wanted to score an animated film, an anime; that has always been a dream of mine. It’s just a joy to score good storytelling, so any film that just tells a story really beautifully I love to do. When I had the time [I would] write a score for “Spa Night” by Andrew Ahn. It doesn’t have any music, but just for fun, I would love to score it to see what it would be like.