For seniors pursuing theses in studio and performing arts concentrations, the show must go on.
By Felicia He 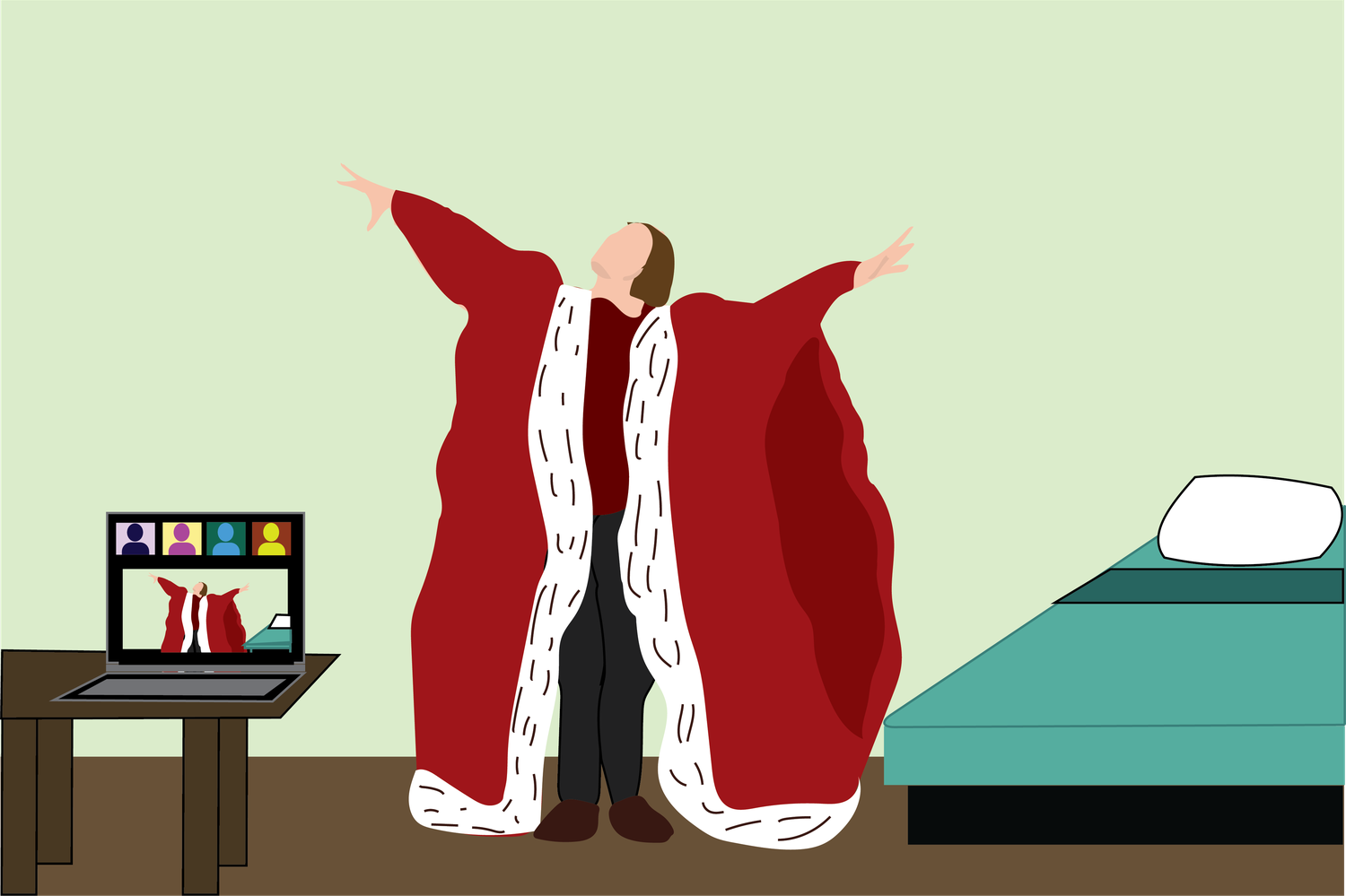 Seniors pursuing theses in studio and performing arts concentrations had to find innovative ways to produce theses amid the coronavirus pandemic. By Ashley R. Masci

Nearly a year after they were sent home amid growing concerns regarding the novel coronavirus, members of the Class of 2021 are now preparing for the culmination of their undergraduate studies.

Before attaining their coveted degrees, however, many seniors must overcome the last few hurdles of their college careers — job interviews, graduate school applications, and for some, senior theses.

For many seniors, the thesis-ing process has been complicated by snowstorms, closed labs and libraries, and Zoom fatigue, which has prompted some departments to push deadlines.

However, for seniors pursuing theses in studio and performing arts concentrations, the show must go on.

Seniors from those concentrations — Art, Film and Visual Studies, along with Music and Theater, Dance, and Media — have spent the past year navigating shutdowns in rehearsal and performance spaces and the impossibility of full in-person collaboration.

In the wake of these challenges, seniors said they responded with varying degrees of both technical and artistic adaptation to tailor their projects to a pandemic-laden world.

“I could not have done this specific project had this year been different, had it not been in a pandemic, had I been at school like a normal year,” said Ellen L. “Elle” Shaheen ’21 of her TDM performance thesis. “I could not have made it a year ago or a year in the future. It would be totally different.”

Many seniors working on Arts theses found inspiration for their projects out of the uncertainty that began last spring.

Benjamin P. Wenzelberg ’21-’22, an English concentrator with a Music secondary who is taking a gap semester, said his thesis responded to the emotional turmoil enveloping the world.

Wenzelberg explained how the pandemic and his gap semester gave him a “very different headspace” to work on his thesis, which is a commissioned opera for Lowell House Opera that adapts episodes of James Joyce's Ulysses.

“My thesis asks the question, fundamentally, of what home is, what it means to lose your way from home, and how to return to it,” he said. “Especially in this time, when all of us are isolated and trying to understand what that means.”

Natalie J. Gale ’21, a joint concentrator in History and Literature and AFVS, said the circumstances of the coronavirus lockdown largely shaped her thesis.

“I really started thinking about rural space as I went back to my home in Maine last March and as all my friends similarly scattered to mostly less urban places across the country,” she wrote in an email. “Super concretely, though, my creative thesis is what it is solely because of the pandemic.”

Alongside an analytical paper, Gale will present a short film, online gallery, and photobook exploring the relationship between lesbian feminist separatists settling on ancestral Siletz land and her own queer community’s relationship to “rural space and settlerism.”

“I spent the fall road tripping to do outdoor, socially-distanced photoshoots with a bunch of queer households located all around rural New England, which obviously would never have happened if not for the pandemic,” she said.

Christina Yee ’21, also an AFVS concentrator, said her thesis evolved from a project exploring the day-to-day influences of branding and marketing into a website that allows viewers to interact with a fictional brand.

“At first when I submitted my proposal, it was definitely more focused on creating something physical,” she said. “As things evolved, I really had to consider how to best convey this experience to people who won’t be able to hold this thing in their hands, and the best solution was the website.”

Devonne D. Pitts ’21, a joint concentrator in TDM and History and Literature, also reshaped her performance thesis, which is a play that explores the question: “How do we deal with death and what happens when we don’t?”

Pitts described how she had to adjust to this question given the barrage of headlines and personal narratives of the past year.

“I was asking the question in what felt like (and continues to feel like) a shifting social paradigm,” she wrote. “My thesis advisors were super helpful in guiding me through those questions by encouraging me to reflect on how these events were affecting me personally.”

Whether they physically traveled to to produce their theses or did most of their work from home, seniors found unexpected connections and personal discovery in their various locations.

Eli Zuzovsky ’21 had most of the screenplay portion of his joint English and AFVS Concentration thesis – a short film and polyphonic novella reimagining his bar mitzvah – written before lockdown. From March to August, he traveled to Israel to shoot his film in Hebrew with a cast of local actors.

“In the shoot itself, at the beginning of the day, we would have a conversation with the entire cast and crew and would take everybody’s temperature,” he said. “We had a person who was our Covid supervisor and made sure that everyone had masks, that they needed to be socially distanced.”

Shaheen explained how her performance thesis, originally planned as a live show at Harvard, became a filmed performance in her hometown in New Hampshire. She said she ended up being not just a writer, but producer, sole performer, and choreographer too.

“I live in a place that has a beautiful arts community that I’ve been a part of since I was little, and I knew that I had people that I wanted to work with,” she said. “I thought, ‘Well, I’m home. So, you know, I might as well utilize them if they want to work with me.’”

Pitts — the senior writing a play about coping with death — said she also forged connections with people in her hometown. She described how she found an unexpected “deepening” in relationships while discussing her thesis with friends, family, and colleagues.

“I deeply appreciated every single one of these discussions I was able to have over the last year or so,” Pitts wrote. “I think I was most proud that the framework of my thesis had allowed the deepening of those connections to take place, in ways I hadn’t originally intended.”

Like so many of their other experiences over the past year, Arts concentrators also found numerous difficulties in the thesis-writing process.

Nivedita “Nivi” Ravi ’21, a joint concentrator in neuroscience and music, said she experienced increased isolation while assembling the musicology portion of her thesis, which studied the effect of music exposure in infancy on the white matter organization of infant brains.

“I think when you're working on a thesis in a digital environment you are kind of going through this experience and process in a very isolated setting,” Ravi said. “Of course I had a few friends who are writing theses, but there was less of this kind of campus community where you felt like a ton of seniors were in your position as well.”

“I was going to try to get patients where I could actually test some of the results with them, but because of Covid that became a lot more difficult, and so I ended up switching over to Zoom,” he said. “I was planning on interviewing a lot more people, but definitely kind of fell short after the pandemic hit.”

Still, some seniors said they were able to transform difficulties into learning opportunities.

Yee said her time away from a studio instilled in her the value of physically making art.

“I’m still trying to get back into a studio space and work with something physical,” she said. “I miss having a paintbrush, or doing printmaking by hand, and being able to see that in front of me.”

“I guess, if anything, Covid has taught me that when I do have that chance once again I should just dive back into it and really treasure it,” Yee added.

Despite encountering setbacks throughout their thesis processes, some seniors said they remained fixed on the big picture — their thesis as the culmination of their time at Harvard.

Wenzelberg said his gap semester was his “silver lining” of the pandemic since the additional time allowed him to make his thesis the “best that it can possibly be.”

“Seeing, as I know a lot of my friends are, the product of our work and knowing that this is what we’re going to put into the world and share with other people, is absolutely exhilarating and something for which I'm extremely grateful,” he added.

Zuzovsky said he appreciated the personal and intellectual growth he experienced thanks to creating his thesis.

A previous version of this article incorrectly stated that Eli Zuzovsky ’21 traveled to Israel in August to shoot his film. In fact, he was there from March to August.