Madeline A. Smith ’14: From Experimenting at Harvard to Breaking Glass Ceilings on Broadway 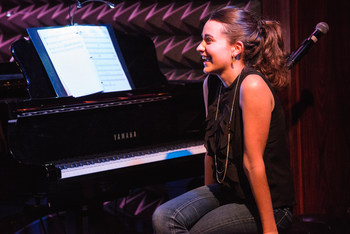 When she took up the baton for “Waitress” in 2016, the then 24-year-old Madeline A. Smith ’14 became the youngest female conductor on Broadway. Today, Smith wears many hats in the musical theater world, from directing and conducting “Ragtime on Ellis Island” to adapting, arranging, and orchestrating a stage adaptation of Disney Channel’s “Descendants” for high school productions. Located in New York City, the music director, arranger, and conductor has taken advantage of a slower-paced arts industry during Covid-19 to reflect and try new things. “I recorded an album of a show that I worked on in 2019 and I finally learned how to cook,” she said with excitement. “I’m also doing a lot of yoga and keeping plants.” But just two years before carving her name into Broadway history, Smith was at Harvard, working on a joint Music and Classics senior thesis.

Prior to college, Smith trained as a classical pianist before falling in love with musical theater during high school. “When people say they’ve been bit by the theater bug, what they really found was a sense of unconditional community,” Smith said. Although she entered Harvard with a bit of an identity crisis over the worry she was “not really an actress,” she quickly realized that her music skills, especially her piano abilities, were in high demand in the on-campus theater community.

For her joint senior thesis, Smith developed an original musical translation of an ancient Greek tragedy by Euripides. Smith admitted to feeling like a “black sheep” at times: While her classmates were writing critical senior theses to launch careers in academia, she was preparing for her musical’s tech week. Nonetheless, she appreciated the support from both the Music and Classics departments while she developed this unique project. Asked whether the senior thesis had ever been performed, Smith said with a laugh, “No, oh my god. To this day, in my mind, I put it in a cabinet. But that could be fun one day, with my Broadway pals, to read the Greek tragedy.” Even so, Smith credits Harvard for her artistic development.

In particular, Smith appreciated that Harvard allowed her to explore her identity as both student and creative. She has remained plugged into the Harvard happenings, hoping to help current students find their own pathways into the arts. For two years after graduating, she served as the assistant director of the First-Year Arts Program, the pre-orientation program that she proctored as an undergraduate. She has continued to connect with students through the Office for the Arts, which frequently hosts events featuring her as a guest artist. As a recent graduate who has found her footing in Broadway, she wants to show students the realities of working in theater today. “I hope that whatever story or experience I have can be a little bit more accessible to students,” Smith said. “The theater industry is always changing, so it's sometimes better to listen to someone who is less fancy but more close to it.”

For Smith, a career in theater came via a snowball effect — from one freelance job to the next, then to a production, and eventually to the stages of Broadway. Over the years, Smith’s work has taken her all around the musical theater world: Broadway, off-Broadway, regional productions, adaptations, readings, concerts, and more.

Among all of her experiences, one memory of the night she conducted “Ragtime on Ellis Island” stays with her. Left alone on the island after accidentally missing the ferry to Manhattan, she remembers plopping down in the middle of the hall overcome with emotions. Up until even the day before, Smith and her colleagues, who were mostly young women, thought this performance was not going to happen due to prohibitive red tape and other obstacles. But this one-time, site-specific experiment had gone ahead against all odds. “I really think there was some magic in that night,” Smith said. “To sit in the team’s achievement was really formative, a real moment of ‘I might have a life in this. We did it and maybe we’ll do it again.’”

Smith was especially excited about “Ragtime” because it elevated many young women working on Broadway, where they have been chronically underrepresented. “What’s tricky about representation of all kinds in musical theater is that the most visible portion of the company is the cast, and so sometimes it seems like Broadway is more diverse across all dimensions,” she said. “I think that can be bad for female representation because there’s almost always female stars — all of the legends of Broadway are women — but that doesn’t always mean there’s representation in leadership, definitely not in where the money is coming from.” In fact, while there has been a much-needed push to increase racial and gender diversity among casts, white men still dominate behind the scenes.

Though musical theater is nowhere near gender equity yet, Smith believes progress is being made everyday, thanks to the foundational work of the first wave of female conductors, directors, and writers. “There were women before me who had it a lot worse,” Smith said. “There are ways that me and my generation will break down walls and glass ceilings but we’re not reinventing the wheel.” Smith wants to continue paving the path for future generations, just as the previous generation paved a path for her. “My role is to make [being a woman on a production team] a little more normal, a little more respectable, so hopefully for the next generation it won’t even be a thought,” she said.

Reflecting on her role in musical theater after the devastation of the Covid-19 pandemic, Smith is even more committed to her efforts to invest in the future of Broadway: encouraging Harvard students to explore the arts, paving the way for the next generation of female directors and conductors, and now focusing her attention on new projects. Smith believes that story and music are crucial mechanisms to help people really see and hear each other, especially in such a divided time. Although she has already made her mark on Broadway, she wants to continue using her skills to invite people into conversations and build towards the future. Smith said with enthusiasm, “I’m ready to commit to the next generation of storytelling.”