Portrait of an Artist: Walter Isaacson on Jennifer Doudna, CRISPR, and Transforming Humanity 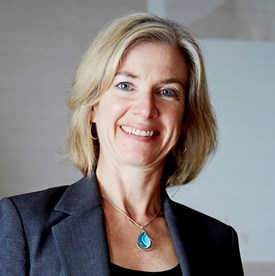 Photo of Jennifer Doudna, American biochemist known for her revolutionary work on the gene-editing software, CRISPR By Courtesy of The Royal Society
By Alexander W. Tam, Crimson Staff Writer

Walter S. Isaacson ’74 has long provided incisive and invaluable insights into the towering figures of human history –– Leonardo da Vinci, Benjamin Franklin, Albert Einstein, Steve Jobs. Isaacson himself is a preeminent figure of our age –– not only an acclaimed biographer, he has also helmed Time Magazine, CNN, and the Aspen Institute. It is from this unique vantage point that Isaacson has approached our foremost innovators and innovations. In his most recent book, “The Code Breaker: Jennifer Doudna, Gene Editing, and the Future of the Human Race,” Isaacson spotlights Jennifer Doudna, the Nobel Prize-winning biochemist and co-developer of CRISPR. Doudna and her colleagues are at the core of what he terms the new revolution of our time –– the life sciences revolution.

The Harvard Crimson: What surprised you the most in researching and writing about Jennifer Doudna and the development of CRISPR?

Walter Isaacson: What surprised me is how pure curiosity about a basic, weird phenomenon in nature turned out to be so useful. This all began with a graduate student in Spain, people who worked for yogurt companies, and other scientists trying to figure out why there are these clustered, repeated sequences in the DNA of bacteria. Eventually, they discovered that it was a way that bacteria fight virus attacks, and how they adapt to each new wave of virus so they can defeat it. For obvious reasons, that turns out to be useful to understand as we get hit by wave after wave of pandemic... Most notably, Jennifer Doudna at Berkeley, as well as George Church at Harvard and Feng Zhang at MIT, were able to take this discovery about the CRISPR system and engineer it into a tool that will edit human DNA in an easy and precise manner. And that was followed by a brilliant guy at Harvard, David Liu, who has come up with even more powerful gene editing tools. Likewise, Feng Zhang and Jennifer Doudna are now turning this tool into a detection technology to create easy-to-use machines that will detect the coronavirus.

THC: I wonder what, in the first place, sparked your curiosity and prompted you to write about Jennifer Doudna and the development of CRISPR.

WI: We’ve seen three great innovation revolutions in modern times, and they’re based on the three fundamental particles of our existence: the atom, the bit, and the gene. The first great revolution was in the first half of the 20th century and came out of Einstein’s papers. That was a revolution in physics that led to everything from atomic bombs to space travel to semiconductors. The second great revolution was in the second half of the 20th century. It was based on the idea that all information can be encoded in binary digits known as bits and that we can manipulate them in circuits with on-off switches. This leads to the internet, the computer, the microchip –– the digital revolution. Around the year 2000, there’s the sequencing of the human genome, followed by the development of genetic engineering, recombinant DNA tools, and eventually a full understanding of the roles that RNA can play. With this, we've entered the third great innovation revolution of modern times. That's the life sciences revolution, in which molecules will be the new microchip. We’ll be able to program them as tools and technology. Having written about Einstein in the physics revolution, and having written about Steve Jobs, Ada Lovelace, and others in the digital revolution –– I wanted to write about this third revolution, the life sciences revolution. And Jennifer Doudna –– because of her early work on the structure of RNA, and then her work on CRISPR, and then her involvement in the moral and ethical discussions internationally about using gene editing –– seemed to be a great central character for a book that also has a colorful cast of players, including Emmanuelle Charpentier, George Church, and Feng Zhang.

THC: As a biographer, when you’ve consciously chosen to hone in on one life as the central pillar, how important is it to simultaneously expand your outlook beyond the individual?

WI: I wanted to show that innovation is a team sport, that creativity is a collaborative effort. I wanted to weave together both these colleagues with whom Jennifer works and the competitors who are racing her to make discoveries, because that's part of the excitement and the mix of science. I also wanted to show the difference that an individual can make –– especially one who is persistent and ambitious and focused. And so, like most biographies, you want to weave together the individual –– the importance an individual can make –– with the collaborative nature of scientific advance. So my book is, to some extent, a biography. But it is also a set of interwoven narratives about the heroes of this new life sciences revolution.

THC: You’ve spoken recently about slippery slopes and the potential for unintended consequences that CRISPR brings. Since you've studied innovation and technological change over many different periods –– including the current one –– do you think there’s an ideal way that we as a society should approach technological innovation and change?

WI: I think it’s important for all of us to think about technological and scientific innovation together, rather than flinch and say, we don’t understand how vaccines work, or we don’t understand how the internet works, or how social media works. I think it's important –– and this is what my book tries to do –– to demystify vaccine discoveries and techniques for editing genes… So, by trying to bring an average reader into the world of scientific discoveries, I hope I’m promoting the possibility of more people being involved in the discussion about using these technologies in an informed way, including whether or not we should make inheritable edits to the genes in our children.

THC: We’ve talked about certain traits in a Leonardo da Vinci or Jennifer Doudna –– curiosity, for example. These innovators also, either in life or in death, came to be seen as leaders in their fields. You yourself are a biographer, but you’ve also been a professor, editor, and CEO. If you could draw leadership lessons from this wealth of experience –– your own or that of others –– what would you take away? What would you like people who are reading your biographies to take away?

WI: I think it’s important to know how to connect things to something larger than yourself. People always tell students to follow your passion. Now, sometimes you need to think that it’s not just about your passion. When Jennifer Doudna had a passion, such as understanding nature, she connected it to something larger, which includes how we create tools that will help make us healthier. So I look at a biography of Jennifer Doudna and look at CRISPR as a way to share the joy of not only understanding how something works –– which is particularly exciting when that something is ourselves –– but also understanding how you can lead a life that is not just successful, but significant and useful.

This interview has been lightly edited for clarity and length.

— Staff Writer Alexander W. Tam can be reached at alexander.tam@thecrimson.com .